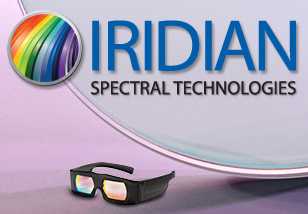 Iridian Spectral Technologies Ltd., an Ottawa optical filter company, has made the Branham300 organization annual list of the top 250 high-tech companies in Canada.

Iridian, listed 191st by Branham300, was in the top ten companies for growth based on its 2009 results and was further honored as one of the top twenty “movers and shakers.”
Iridian had a growth of 106% in revenues in the last fiscal year.

George Laframboise, president of Iridian said “We have a growth strategy based on a diversification of our markets building from a common base of technologies and we were very successful last year despite the difficult world economic conditions. We owe this growth to the efforts of our staff who are dedicated to competing in global markets.

"They are supported by a large R&D effort, extensive automation of production and a sales and marketing team that is focused on customer service. A major factor last year was the emergence of the 3D cinema market. Iridian manufactures both the color filter wheels for adapting projectors to 3D and the matching 3D glasses.”

Iridian is a photonics company that has two manufacturing locations in Ottawa and employs over 100 staff. It produces thin film optical filters which find applications in fibre-optic communications systems, in bio-photonics and spectroscopic instrumentation, in entertainment systems such as 3D cinema and in some space-based and astronomical observatories.

Iridian was founded in 1998 by its current CTO, Brian Sullivan, with its initial technology licensed from the National Research Council’s Institute for Microstructural Sciences. The company began as a supplier to the telecommunications industry and this is still an important area of application.

Over the last six years, the company has diversified its product lines and entered many new markets. Over 95% of the production is exported.

Entering its 17th year, the Branham 300 (www.branham300.com) highlights the top Canadian and Multinational ICT companies operating in Canada and is widely considered to be a leading source of intelligence on Canada’s ICT industry.
www.iridian.ca