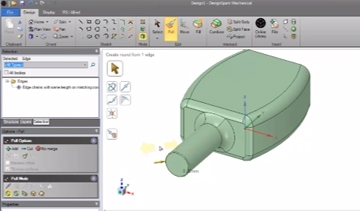 Typically, learning to use 3D CAD software efficiently requires a sizeable investment in time and money—two factors that keep many drafters rooted to their familiar 2D packages and many would-be designers at arms length from complex 3D applications.

Based on SpaceClaim Engineer code, DesignSpark Mechanical isn’t so much a “dumbed-down” or feature limited version of the comprehensive modeling package but a rearrangement of the interface to simplify it for new and/or casual users, say SpaceClaim reps. For example, using Mechanical is similar to Sketchup’s sketch and extrude technique, but focuses on four basic modeling commands: Pull, Move, Fill and Combine.

Within each of those commands, however, reside many of the functions experienced CAD users would be familiar with. For example, Pull is used to extrude, fillet, sweep, shell, and scale geometry, while Move can be used to reposition, rotate, pattern or mirror 3D features or 2D sketch components. Similarly, Fill is used to create surface patches and Combine contains all the common boolean functions. While Mechanical isn’t “Toy CAD” and features many of its big brother’s modeling capabilities, it doesn’t include the extras of commercial applications such as industry specific tools or rendering. It also doesn’t have much in the way of inter-CAD conversion or native import/export.

For example, it can import most open formats such as OBJ, SketchUp, STEP, STL and notably, ECAD files (IDF) like those created by the company’s other free electrical CAD application, DesignSpark PCB. This, the company says, allows electrical and mechanical engineers to collaborate easily on the creation of circuit boards and the larger enclosures and/or assemblies to house them.

Similarly, Mechanical only exports AutoCAD (DXF), OBJ, STL, XAML, JPEG, and PNG file formats, along with 3DPDFs. This fact somewhat limits its use to 3D printing, CNC preparation and early-on design conceptualization. However, solids can be exported individually or combined (internalized) into assemblies or “components” which can be packaged as a single file.

Even so, Mechanical users do have access to approximately 38,000 3D models in DesignSpark’s online component library as well as TraceParts’ (tracepartsonline.net) extensive CAD portal in DesignSpark Mechanical format. In addition, the modeling application also acts as a sort of e-commerce portal, in that a tab within the interface allows users to order components, in the automatically populated BOM, directly from Allied Electronics/RS Components.

DesignSpark Mechanical is compatible with Windows XP through 8 and is available in either 32- or 64-bit versions. To download a copy and get a few introductory tutorials, check out the DesignSpark website.
www.designspark.com/eng/page/mechanical