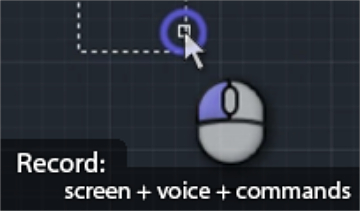 If your CAD ninja skills qualify you to create video software tutorials instead of merely learning from them, the folks at Toronto-based Autodesk Research recently updated Project Chronicle, a desktop recording utility optimized for Autodesk design tools — although it also works with any desktop software.

Unlike similar applications, Chronicle also captures workflows in addition to the video and voice-over audio. Here, workflow refers to the specific tools, settings and dialog boxes — and when they were used – recorded during the step-by-step modeling procedure. For example, the presentation would show which mouse button was pushed; the values input to a dialog box and which modeling function was called. These details are displayed on a time-line along with the video and audio.

After editing the tutorial inside Chronicle, recorded tutorials are automatically uploaded to Autodesk’s Project Chronicle website, a collection of public and private tutorials similar to a YouTube solely dedicated to user-generated CAD instruction.

Like YouTube, the resulting videos live not only on Autodesk’s site but can be embedded in any web site. Video channels can also be marked “private” and made accessible only to co-workers or a select group of users. Videos can also be downloaded for archiving.

While the utility will capture video from any active window, the workflow component, at present, is recorded only in AutoCAD and Revit (all flavors but only the 2013 and 2014 versions) as well as AutoCAD LT 2014. The company says the plan is to include other Autodesk products in the future.