LAS VEGAS – The 3D Print Marketplace doubled the 2014 footprint of 3D printing at the International CES this year.

3D Systems announced the acquisition of UK-based 3D printer manufacturer botObjects and showcased a number of new products, including a new version of the Cube desktop printer called the CubePro C capable of printing full color objects. Powered by botObjects technology, the CubePro C uses a proprietary 5 color CMYKW cartridge system and PlasticJet Printing (PJP) to produce a wide palette of colors and gradients. The CubePro C can image down to 25 µm and will be priced at under US$5,000 during the initial limited release with wide distribution expected later in 2015. Stratasys was noticeably absent from CES 2015 show floor, instead choosing to focus attention on its Makerbot subsidiary. “It’s been a really exciting year for us,” said Anthony Moschella, VP Product for Makerbot. “Our single biggest vertical is still education, but beyond that the majority of our customers are professional users such as mechanical engineers, architects, industrial designers, as well as automotive designers and aerospace users. “We’re crossing over into the Stratasys market a bit, but that’s okay. There’s a big misconception in the world that
Makerbot and Stratasys 3D printers can’t coexist – that one replaces the other. It’s simply not true!” Moschella explained. “An engineer with a Makerbot Replicator on his desk will be able to prototype an object 10 or 15 times a day, making modifications between each printing. It’s the idea of real-time prototyping. “A Makerbot printer is small, inexpensive, quiet and easy to use – and it’s on your desk. An engineer can iterate and print all day before sending the model to a higher-end Stratasys printer,” Moschella said. While not announcing any new 3D printers at CES, Makerbot unveiled a new range of filaments featuring specialty materials such as ferrous metal, wood, limestone, and bronze. “These are new compounded materials that have actual particles of real metal, stone or wood in them, yet print like regular PLA (polylactic acid) filament,” said Moschella. “The finished object doesn’t feel like PLA anymore, it feels like a piece of metal or like a piece of wood. And while the iron ferrous compound is not a conductive material, it is magnetizable.” The new filaments are planned for release late 2015. “Our company is experiencing a nice transition right now,” said Jesse Harringon, program manager and maker advocate at Autodesk (www.autodesk.com). “We’re really trying to explode the 3D creation market, so we came out with a really cool thing called Spark – an open platform for innovation. “Spark is free to license, so any company that wants to get into 3D can use the Spark building blocks in the development of their own software whether they are hardware manufacturers, app developers or product designers.” Also debuting at CES 2015 was Autodesk’s Ember – the first Spark-powered 3D printer using digital light processing stereolithography (DLP SLA) capable of producing very high-resolution objects. “Spark has enabled us to work with so many different people and such a wide variety of companies,” Harringon said. “We’re really expanding the 3D universe.” Voxel 8 attracted the engineering eye at CES 2015 with its innovative 3D Electronics Printer. Originally a materials company spun out of the Jennifer Lewis material science group at Harvard, Voxel 8 chose the exhibition to introduce the world’s first 3D printer capable of printing both matrix and conductive elements at the same time. “Voxel 8 offers the hardware, software and the materials that seamlessly allows a user to 3D print functional electronic objects,” said Travis Busbee, co-founder and materials lead for Voxel 8. “What separates us from other companies that have tried to 3D print electronics in the past is that our ink is about 20,000 times more conductive than the most conductive 3D filament that you can buy. That allows us to 3D print objects that are actually capable of carrying current.” “We partnered with Autodesk to create a software package called Project Wire,” explained Busbee. “Using this software you will be able to combine a 3D object – either STL or OBJ – with electronics selected from our component library, consisting of things like LEDs, resistors, capacitors and developer boards. “Also, users will be able to create their own things and add them to the component library. You can drag them into your object and position them how you want them, and then wire them up in 3D. The file exports directly to our printer that can then print it using matrix and conductive materials. The conductive material has the consistency of toothpaste even though it is composed primarily of silver. The onboard pneumatic system drives the silver paste out a nozzle at 250 µm. Once the paste exits the nozzle it holds its shape like a physical gel,” Busbee said. “The printer can be paused for the operator to position additional electronics inside the object, then resumed to complete the modeling.” As a demonstration, the Voxel 8 3D printer produced a small operational quad copter with circuitry in place enabling current to flow from the battery to the motors. Priced at US$8999, Volex 8 was taking preorders at CES for the initial release of 300 printers, scheduled to ship by the end of 2015. 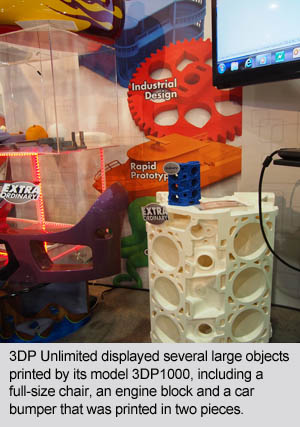 A large volume 3D printer was also introduced at the show. “What makes our 3D printers unique is the scale of what they can produce,” said John Good, VP 3DP Unlimited. “We can print 1 x 1 x .5 m – which to put in perspective when compared to a typical Makerbot is 74 times the work area.” Demonstrating at CES was the 3DP1000, the company’s flagship device that began shipping in Q2 – 2014 priced at under US$20,000. Also on display were several large objects printed by the 3DP1000 including a full-size chair, an engine block and a car bumper that was printed in two pieces. The printer is based on the same industrial technology used on a waterjet, plasma, or a laser-cutting machine and can print 70 µm resolution. The 3DP1000 is designed to work with multiple polymers including new flexible, porous or metallic filaments coming onto the market. “We are only selling about 50% of these units into the prototyping market,” Good revealed. “Because the build volume is so large we are seeing a lot of usage in other areas such as art, architecture and set design. Service bureaus are using it as a production machine with a mix of small medium, and large objects as a part of one print job. The 3DP1000 is solving a problem that no one else has addressed.” While the gadget-obsessed were drawn to the latest 3D printing hardware at this year’s show, the emerging boom in print media and filament technology introduced at CES 2015 spells the maturing of the 3D printer. Competition and collaboration are driving 3D printing beyond the niche and towards on-demand manufacturing. Zac Bolan is a Calgary-based writer and photographer (zbolan@mac.com).]]> [video src=http://www.youtube.com/watch?v=zbm2SSql8V8]