Built for the Army's demilitarization program, the system dismantles obsolete ammunition and missiles. 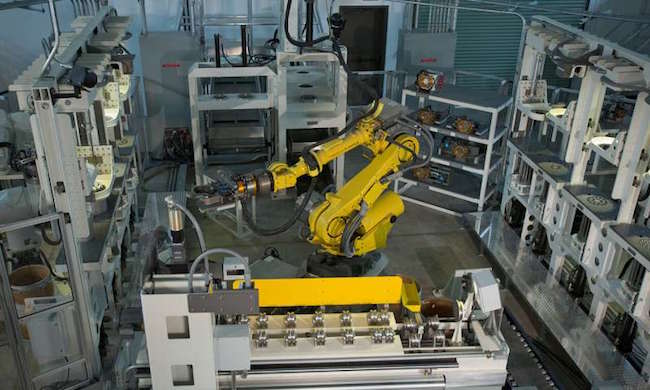 Owned by the Army. The automated system is located at the Anniston Munitions Center’s Multiple Launch Rocket System Recycle Facility in Alabama. The system was built for the Army’s demilitarization program that aims to dismantle obsolete ammunition and missiles. The project was funded and managed through the Department of Defense.

“This is by far the most complex, automated robotic demilitarization system that Sandia has built in the last 20 years,” said computer scientist Bill Prentice, Sandia software lead for the project. “This is exactly the kind of thing to use robotics for—to get humans out of harm’s way. Let the automation of robots do what they do well, and have humans make advanced decisions on safety.”

The system safely reduces the stockpile of Multiple Launch Rocket System munitions that have been in storage and it enables the Army to recycle rocket materials—capabilities that did not exist. They can now recycle the rockets’ aluminum warhead skin, steel grenade bodies and copper.

Speeding up the process of demilitarization also reduces costs. The automated robotic system is designed to demilitarize up to 21 warheads per eight-hour shift.

“We were able to remove people from a potentially very dangerous situation and created something that allowed products to be recycled and reused, which is what the DOD demilitarization program is about,” said project lead Walt Wapman, a mechanical engineer.

Humans still oversee operations, learn to run the advanced robotics system and watch the process on live feeds in a control room. Computer vision, which is a form of artificial intelligence using digital images from cameras, can detect abnormalities during the demilitarization process and alert operators who determine if there is a safety concern.

How the system works

All system robots are commercial-off-the-shelf robots that were customized and programmed by Sandia engineers to do specific tasks.

“There are 644 grenades per warhead, and our job is to take these tightly-packed, columnated grenades in the warhead foam packs and demilitarize them,” Prentice said.

The system can pick up and place foam packs and grenades in precise orientations, and lock and rotate the grenades to examine and remove fuses in a safe way, Prentice said.

For more than three years, Prentice said he put his heart and soul into the robotic system. He and a small team used three computer languages to program the nine robot cells, tested the system and traveled back and forth to Alabama while the robotic work cells were assembled and tested.

“Part of the challenge is when you demilitarize warheads like this, you’re working on munitions that are 10, 20, 30 years old,” Prentice said. “You test on inert munitions that are in pristine condition, but when you start cutting apart warheads and looking at live grenades, they might have some environmental effects that cause process abnormalities, such as grenades being stuck together during removal.”

“I’d say that what Sandia really brought to the table was an integrated, small team that took a blank sheet of paper and made a nine-robot automated system with 55 cameras, hundreds of sensors and a lot of exceptional designs, enabling us to deliver a reliable system to the Army that’s been safe,” Wapman said.