Actually, It is Rocket Science 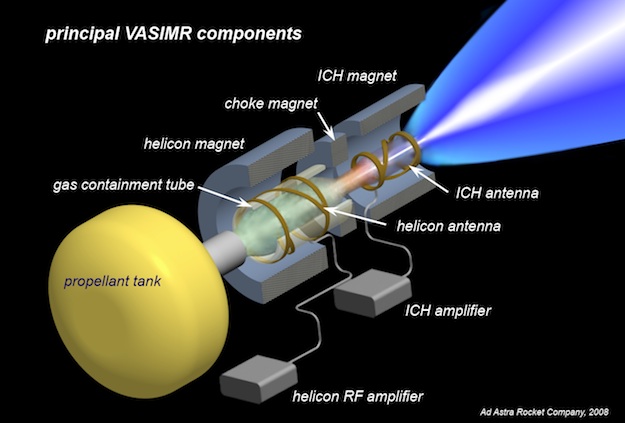 If you want to travel to Mars, you’ll have to wait until the two planets are at their closest positions, a phenomenon that happens every two years. Problem is, it takes around 10 months for a rocket to span the distance using conventional propulsion technology. By the time an astronaut crew reached the red planet, Earth would be too far away for the return voyage. That leaves two unappealing options: construct a rocket large enough to transport enough fuel and supplies for an extended stay (i.e. galactically expensive) or make the expedition a “one-way” trip.

Essentially, the engine works by super heating a gas like hydrogen or argon to the plasma state using radio waves. Because plasma would vaporize a purely physical container, the gas is injected into a tube-shaped magnetic containment field. The first of two high-powered RF antennas excites the gas into ionized plasma. It then moves into the Ion Cyclotron Heater (ICH) section where the plasma is further energized by a second, more powerful RF booster.

“We put a lot of energy in at this stage,” explains Tim Hardy Engineering Head at Nautel Ltd. “If you stimulate the plasma with an EM field at its resonant frequency—on the order of about 500 kHz—the kinetic energy picked up by the plasma ions causes them to flow in helical orbits about the magnetic field lines. As the plasma passes through the engine’s magnetic nozzle, the orientation of the magnetic field lines expand, which causes those little orbits become linear and accelerate out of at very high speeds.”

The result is a highly efficient propulsion system that requires only a fraction of the fuel weight and storage space of solid fuel systems. And, since the stream of ions accelerates a vessel continuously, as opposed to the “burn and coast” method of a conventional rocket, VASIMR could potentially cut trip time to Mars from 295 to 85 days, making affordable and survivable round trips possible.

Hardy says plasma propulsion drives are already in use, but VASIMR’s design makes it superior. First, it can use a cheap propellant, like hydrogen or argon, rather than very expensive xenon gas used in the present technology. It also has two operating modes, or “gears” in essence: one high power/low efficiency mode for moving out of Earth orbit, and a high efficiency “overdrive” for unfettered deep space travel.

While the news opens the possibility for relatively quick and inexpensive space travel, Ad Astra wouldn’t have hit their milestone without the help of Nautel’s leadership in RF technology.

“They needed a 200kW system,” Hardy says. “But when you want to demonstrate a system with that amount of power in a lab, you can’t buy off-the-shelf products. Ad Astra had some very big and heavy tube amplifiers that were sufficient to demonstrate the idea at low power but wouldn’t work in space. They needed a solid state solution, with small size, low mass, low voltage and high efficiency. So they went looking for a partner and found us. In the end, we were able to better by half their power density requirement of 1 kilogram per kilowatt and their efficiency target as well.”

Planned for a 2014 deployment if Ad Astra can attract sufficient funding, VASIMR is scheduled for use on the International Space Station as a less expensive way of maintaining its orbit. But, before it can take astronauts to Mars, engineers will have to finalize how to generate the electricity needed to power VASIMR’s super-conducting magnets and high power RF systems.

“To travel to Mars, nuclear power in space may be required,” Hardy says. “But to keep the International Space Station in orbit, which only requires the engine to run for 10 minutes every hour or so, they’ll use a battery and solar array. When you look at the economics of that, it costs NASA $140 million every year to transport re-boost fuel to ISS with the space shuttle. A VASIMR engine would require only 10 percent of that cost."
www.nautel.com
www.adastrarocket.com