Association report finds orders topped $2B before May. 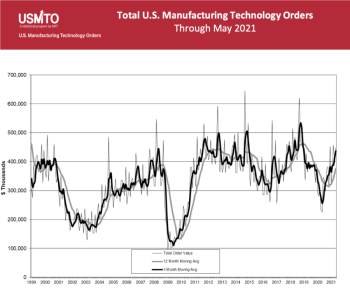 According to the Association For Manufacturing Technology (AMT), U.S. manufacturing technology orders totaled US$448 million in May 2021 – an increase of 11% over April orders and nearly double that of May 2020. Total orders for 2021 topped $2 billion two months before that milestone was reached in 2020.

“Given the state of the economy last year, orders were expected to be up, but so far, 2021 is shaping up to be a historic year,” said AMT president, Douglas K. Woods. “In only three other years, since 1998, have orders surpassed $2 billion by May. Manufacturers across the industry have expressed broadly positive sentiment, so we would expect the remainder of the year not only to return to the pre-pandemic trend but also to exceed previous forecasts.

The United States Manufacturing Technology Orders (USMTO) Report is based on the totals of actual data reported by companies participating in the USMTO program. The report, compiled by AMT, provides regional and national U.S. orders data of domestic and imported machine tools and related equipment.
www.amtonline.org