The Metal Jet is following a production roll-out to be completed by 2021, customers can pre-order machines now.

Meant to deliver mechanically functional parts for mass production at up to 50x greater productivity, the HP Meta Jet Production Service to fill orders for production-grade final parts kicks off in 2019, with full mass-production to be rolled out by 2021.

According to Dr. Tim Weber, who’s the global head of 3D printing for HP, the Metal Jet system will utilize their multi-jet fusion process previously seen in their plastics printer as a starting point for their metal system. Traditionally, the Metal Jet would lay out a bed of metal powder before jetting out a fusion agent onto the powder. Think of this process as infusion moulding one layer at a time.

The real difference between the multi-jet process for their plastics system and the Metal Jet comes with the next step. Instead of applying a giant amount of energy to fuse the powders together as you would with plastics, the Metal Jet uses binder jet technology. Instead of jetting out a fusing agent, the Metal Jet system relies on a binding agent spread out amongst the powder bed. What’s effectively glue, is used creates green parts layer by layer that are then placed in an AMTS standard sintering furnace and Bob’s your uncle.

One of the more interesting pieces of info that came from the press briefing was the price point. Currently, HP is currently stating the Metal Jet will go for under $399,000. Currently there’s no specific price point, but with the HP press conference happening later today, we’ll update our story accordingly.

Focusing on iron and steel production—which isn’t surprising given global production versus relative cost—the Met Jet system is directing their efforts for mass production towards the automotive, industrial machinery industries and the medical industries.

Part of this announcement was the inclusion of a multi-company partnership to reach mass production capabilities. When it comes to automotive HP has partnered with GKN Powder Metallurgy and Parmatech for its medical 3D printing production. Parmatech is known for its metal injection moulding and has been involved with metals manufacturing for more than 40 years, specializing in producing low-cost, high-volume metal parts for the medical and industrial sectors. 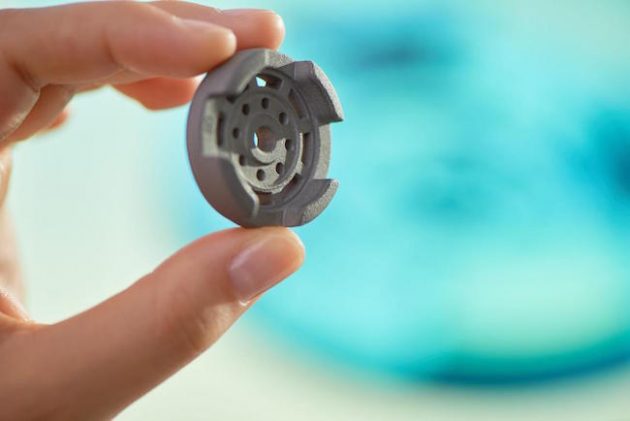 “By combining the forces of HP and GKN Powder Metallurgy, we will push the productivity and capability of our customers to unprecedented levels based on the economic and technical advantages of HP Metal Jet technology,” Peter Oberparleiter, CEO of GKN Powder Metallurgy.

On top of the partnership announcement, HP has stated that they’ve already begun working a variety of customers on potential designs, including Volkswagen and Primo Medical Group on the medical side.

A few years ago HP moved into the AM industry with the introduction of the 4200 Jet Fusion 3D printer focused on plastics manufacturing, and back in June HP added to that product line with the 300 series printer for functional prototyping. The 300 series is built from the same technology but is smaller and more contained.