It's a two-pronged system they refer to as Modular Ocean Based Instrument (MOBI) and the Automated Tracking and Location Aggregation System (ATLAS). 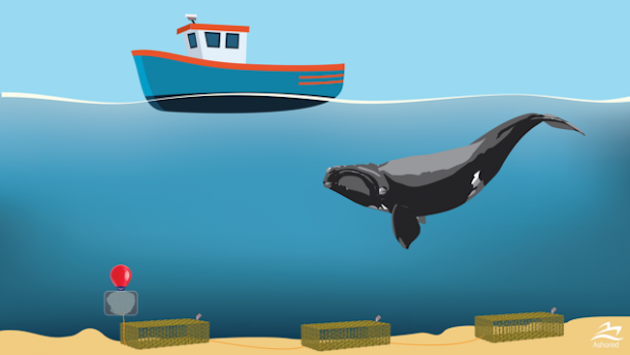 A diagram of the MOBI system. (All photos and videos courtesy of Ashored Innovations)

According to the National Marine Fisheries Service, “an encounter with fishing gear is the most frequent cause of documented right whale serious injuries and deaths in recent years.” It’s a problem that in 2017, resulted in the injuries or mortalities of at least 12 North Atlantic right whales, an endangered species that live primarily off the Eastern coast of Canada and the United States.

With an estimated one million vertical lines of fishing gear deployed in right whale habitat in both in the US and Canada, the risk of entanglement is significant. It’s here, in Halifax, Nova Scotia, that Ashored Innovations is quietly working away on a solution.

Founded by a trio of friends who all grew up on the East coast, Ashored is looking to help solve the problem of marine animal entanglement through a ropeless trap design that they’ve developed with the help of Enginuity Inc., an engineering firm based in Halifax.

“Our initial idea was that if we could let the fisherman know which lobster traps had lobsters in them and what percentage of that represented in the trap, then they could just go out and haul up the ones ready to go to market and leave the other ones to soak a little longer,” says co-founder Aaron Stevenson.

But after sitting down with members of various fishing communities, Ashored realized they’d have to pivot to another project after “they basically said ‘if the traps are empty we’ll just haul them up and move them somewhere else,’’ Stevenson says.

Differing from a traditional bait trap that works off of a rope and buoy system extending to the ocean floor, Ashored pivoted to a two-pronged system they refer to as Modular Ocean Based Instrument (MOBI) and the Automated Tracking and Location Aggregation System (ATLAS).

MOBI acts as the buoy system that floats a few feet above the trap but remains connected to the cage itself. When a vessel comes to a stop above the MOBI system, a push of a button releases a spool of rope that launches the entire buoy system—cage included—towards the surface. Upon which time the fisherman can reel in the buoy, spool the rope back into the cylindrical casing, re-bait the trap and drop it back down to the ocean floor.

The second application, ATLAS, comes into play when tracking the trap. Using a mix of radio-frequency identification systems (RFID) and machine learning algorithms, Ashored is able to track key variables such as location, date, weather, tides, and water temperature. Additionally, ATLAS is useful “to other vessel operators in the area because they’d need to know where gear is, so they don’t wind up laying their gear on top of someone else’s,” while masking identifying information of the user.

According to Poole, most, if not at all, vessel captains use some form of GPS software (MaxSea, Olex, etc) to mark the start and end of their trawls. This tech would work in conjunction with the Ashored interface, which scans RFID tags as they enter the water, recording ID and geolocation, saving it for future reference. Using the Ashored interface, each captain can see the location of their own underwater buoys and trap at all times, and the team is working on a talkback feature via acoustics to tell a nearby vessel where a lost trawl is if in a listening range if the buoy and trap were to be pushed off it’s original location.

“We use a long-range RFID system with high power readers. Range around 30 feet which is enough to reach across the stern of the vessel,” says Poole. “The point is to automatically scan into our database without manual entry. Providing data we can then use to prevent trap overlay as other fishers will not be able to see surface buoys to check if someone else has already set there.”

All data is transmitted to a cloud server live from the vessels after the tags are scanned on board the vessel. The release mechanism is currently on a timed based solution (for testing purposes) that the operator can set themselves. I.E vessel captains can set it on a 12-hour release on the way back into harbour, to be able to check it the following morning. Ashored is currently working with acoustic transducers and hydrophones to create an on-demand communication link for release. The time-based approach is intended to be kept as a redundant backup in case of a communication error.

While they’re moving along well with production, aiming to release commercially by the end of 2019, things weren’t always so cohesive. Stevenson recalls a meeting a meeting the Mi’kmaq fisheries advisory committee, a community directly affected by the water closures enacted by Fisheries and Oceans Canada during instances of a right whale sighting.

“I sat down with them and talked briefly about our product and our design and they were skeptical,” Stevenson says. “I’m writing all of their concerns down and one of the guys says ‘I hate to keep shitting on your idea but these really are the problems we’re having,’ and I said ‘ If we can’t solve or address every one of these problems, then we don’t have a solution and I would rather know that today, then once we get a few hundred thousand dollars down the road,’ Stevenson says.

For Ashored, this type of communication, feedback and community engagement was their main priority from the beginning. Maxwell Poole, chief product officer for Ashored has a sounding board in his brother, a local lobster fisherman who he would update on the progress. “It was either ‘no this isn’t going to work at all on the boat because of x,y,z’ or ‘yeah that’s actually pretty useful,’” Poole says.

By July of 2018, the Ashored team began seeing progress in their design, with Poole stating that the system “started checking off a lot of the boxes that I had questions about and that users had questions about. They’re in the process of live testing with an industry association and will be iterating on the feedback.

So far, they’ve relied on funding from various design challenges, as well as grants from Dalhousie University and Saint Mary’s University and are in talks about selling the product on a commercial level by the end of 2019. The team has focused on product development first and wanted to get to a point where they could speak intelligently to what it’s capable of, which is where Stevenson believes they are now. Recent trips to the United States has generated interested as well. On a local level, Stevenson says conversations are happening.

“Being able to work through that cycle not only helps us from a product design standpoint but it builds confidence within the industry. From a business perspective, it helps us to be able to discuss it with investors and the department of fisheries and oceans and other regulatory bodies to show how we’re going about assessing and proving each step of our technology,” Stevenson says.