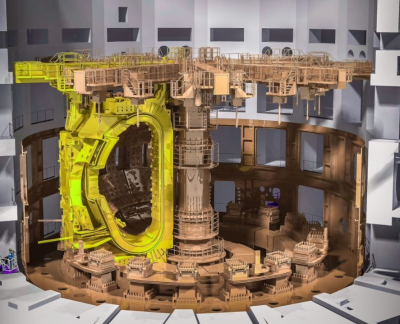 PARIS – A hugely ambitious project to replicate the energy of the sun is entering a critical phase, as scientists and technicians in southern France begin assembling giant parts of a nuclear fusion device, an international experiment aimed to develop the ultimate clean energy source.

World leaders involved in the project, or their representatives, on Tuesday appeared virtually at a ceremony for the start of the new stage of the International Thermonuclear Experimental Reactor, or ITER, noting that work has proceeded despite the COVID-19 pandemic in many of the 35 contributing countries.

“Clearly, the pandemic impacted the initial schedule,” said ITER’s director-general, Bernard Bigot, who led the ceremony at Saint-Paul-les-Durance, northeast of Marseille. He said none of the on-the-ground staff has contracted COVID-19.

Scientists have long sought to mimic the process of nuclear fusion that occurs inside the sun, arguing that it could provide an almost limitless source of cheap, safe and clean electricity. Unlike in existing fission reactors, which split plutonium or uranium atoms, there’s no risk of an uncontrolled chain reaction with fusion and it doesn’t produce long-lived radioactive waste.

Among other elements, Korea is manufacturing four sectors of a vacuum vessel, a hermetically sealed chamber in which plasma particles, derived from heated hydrogen gas, spiral without touching walls. European countries are building five other sectors.

French President Emmanuel Macron hailed ITER as a “promise of peace” because it brings together countries that decided to forego differences for the “common good.” China, the U.S., India, Russia, South Korea and nations of the European Union are taking part in the project.

There was no sign of the acute discord currently roiling ties between the U.S. and China, and India and China.

Indian Prime Minister Narendra Modi, in a statement read by the Indian ambassador to France, called international collaboration “a perfect symbol of the age-old Indian belief … (that) the world is one family.”

Bigot compared the milestone phase getting under way to assembling a giant, three dimensional puzzle that “must (have) the precision of a Swiss watch.”

Billed as the world’s largest science project, ITER is gigantic. The circular device, called a tokamak, has a 30-meter circumference, stands 30 metres (100 feet) high, and is made up of more than a million parts constructed in numerous countries.

Some pieces transported to France weigh several hundred tons. Tools to put the reactor together match that size, with giant lifts that must transfer components over the walls and down into “the pit.” A key component being built by the U.S., the Central Solenoid, is the most powerful of ITER’s numerous magnets. Together, they will be strong enough to lift an aircraft carrier.

The project begun in 2006 is far from over. The experimental reactor is to head for another landmark moment in five years, described as a “trial run” when scientists launch what is called “First Plasma” showing that the machine functions, including magnetic fields and other operations.

Bigot, the ITER’s director-general, called fusion energy a “miracle for our planet.”

He said that smaller experiments are complementary to ITER. Bigot predicts a bright future for his international baby, saying he foresees a scaled-up ITER, perhaps twice as large, to provide power to the grid. But its viability and economic competitiveness must first be demonstrated, he said.

The project’s estimated cost just for the EU was about 20 billion euros ($23.5 billion), Bigot told reporters. He said a full price tag was difficult to estimate because participating countries make their own contributions.
www.iter.org