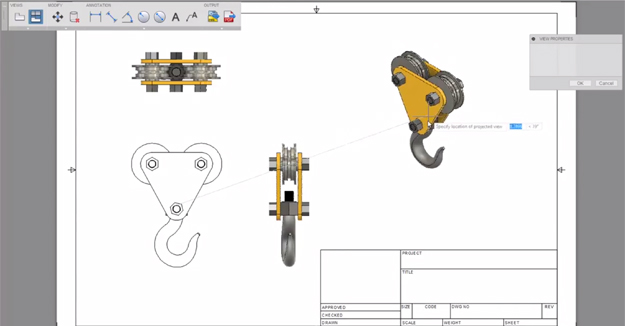 Shortly after its update in May, Autodesk has released another upgrade for its online 3D CAD modeling and CAM application, Fusion 360. This latest update includes the long awaited ability to create 2D drawings from 3D modeled parts and assemblies, either from the dashboard or the design environment. In addition, Fusion lets users select views, move them associatively with the parent view, and access all standard dimensioning and annotation features.

While drawing functionality isn’t available to Mac OS users yet (due in August the company says), the upgrade does open Fusion 360’s CAM functions to Apple devotees. According to the company, all the application’s 2 to 2.5 axis CAM features found on the Windows version are now available natively on the Mac OS. The new CAM additions also include automatic tab support in 2.5 Contour strategy, new tool library, and absolute stock size support in stock definition settings. Check out the full details on Fusion 360’s support forum.
http://fusion360.autodesk.com/