Autonomous robot to begin delivery service on U of Waterloo campus 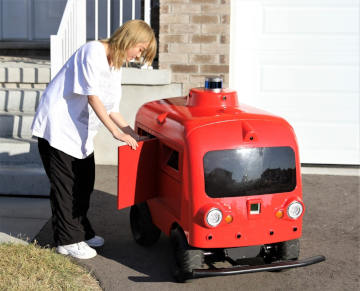 Waterloo startup, LoopX, announced it’s close to launching an autonomous delivery robot on the University of Waterloo campus. Called GoosEX, the company’s bright red electric delivery vehicle, measures 1.2m by .8m by 1.2m and can handle payloads up to 100kg. According to its developers, it can travel up to 40km on a single charge, at a maximum speed of 10km/h.

To reach its destination, it’s equipped with various autonomous technologies, including LiDAR and long-range radar, as well as as multiple cameras, ultrasonic sensors and a GNSS module gives the robot 360-degree environmental awareness and centimetre-level positioning. For safety, the robot includes lights, bumpers and on-board e-stops and an audio pedestrian alert function.

Capable of multiple deliveries at once, the robot contains six compartments, that can contain pizza, or groceries, pharmacy or other smaller items. When the robot arrives, customers are sent a code that unlocks their particular compartment.

As yet, the company says it is fully insured to operate on private property. For its first test, it has permission to operate GoosEX on the University of Waterloo campus, including the main campus and the David Johnson Research + Technology Park. In the future, LoopX hopes to see its robot authorized for use on public roads and is currently being reviewed by Transport Canada.

In it’s Robot-as-a-Service (RaaS) business model, LoopX says it will partner with online delivery services, (e.g. SkipTheDishes) and local restaurants and grocery stores and charge those partners delivery fee per service range. For the launch the company says it will have a flat $2.00 fee.
www.loopx.ai