Avidbots looks to wipe the floor with its fully automated Neo 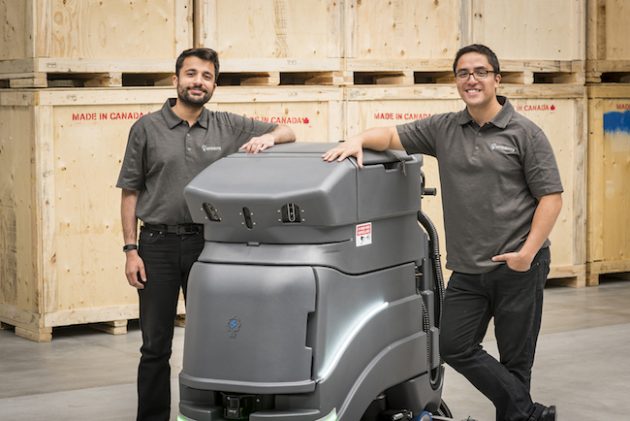 Created by University of Waterloo engineering graduates, Pablo Molina and Faizan Sheikh, the Neo was initially build an autonomous snow clearing machine. Eventually, the two were talked out of the idea by a snow removal contractor who pointed to mild winters and seasonal employment. However, they were intrigued by their local Wal-Mart that was cleaned every night.

“We never built anything; it was all just research at first,” Molina says. “I was having a great time looking at a chassis we could use but it didn’t work out. Once we started on the cleaning robot, it all went fairly quickly. I think we built the first actual robot in the spring of 2014.”

Their love of robotics stems back to childhood, where both Molina and Sheikh were enthralled by Japanese Anime. Even the name Neo, combines their love of pop culture—the titular Neo from the Matrix franchise—and shades of Greek history. The epistemological definition of néos, is “new” in Greek. It’s a name indicative of a company dedicated to always improving a product based on evolving feedback.

The purpose-built floor-scrubbing robot was launched in early 2017 and is currently in its 9th generation. Early in its development, however, the duo quickly realized they couldn’t just convert a manual floor scrubber into an automated sensor-bearing machine. The complex differences between the two models were compounded by the fact they couldn’t find a manual floor scrubbing company that wanted to partner with them.

“From a product point of view, there were a few things we had to deal with in trying to convert a manual machine: the height of the machine, the positioning of the wheels and the weight distribution,” Molina said. “With the robot,you have to put sensors in places that wouldn’t work strategically on the other machines, and it’s very difficult to modify a manual machine because they’ve been built with mass production in mind.” 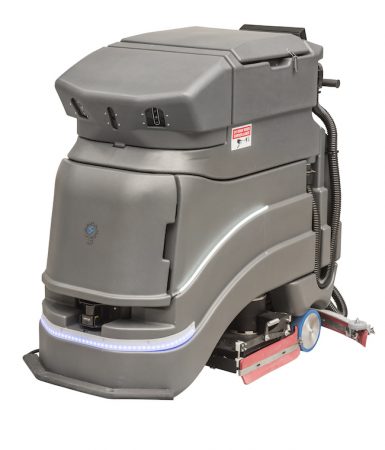 Currently in it’s 9th iteration, the Neo robot looks to expand nation-wide though the company’s partnership with Compass Canada.

It’s an interesting design dilemma: It’s an interesting design dilemma: Building something based on a product model that doesn’t fit what you’re trying to accomplish. Avidbots is looking at the end goal—cleaning floors—while stripping away the traditional physical unit that has been intrinsically connected to final goal itself. It’s analogous to driverless cars: how do we rethink about building a car when the key component is no longer a factor to consider?

Eventually, Molina and Sheikh landed where they are now with Neo, utilizing lasers and 3D cameras along with AI algorithms, to accurately have the machine clean up to 1.2 metres per second and navigating a space within 5cm accuracy. Getting the Neo acquainted with the space you want to clean is fairly easy. Initially, the machine is walked around the room as it familiarizes itself with where walls, doorways and static objects are located. After that, the Neo can be turned on and begin cleaning freely.

When it comes to the partnership with Compass Canada, Sheikh and Molina both view this as an expansion of sorts, or as Sheikh puts it “we’re trying to bring more robots to the real world.” The partnership began with an application phase. Compass Canada tested out the Neo to find a suitable fit. Loving what the machine was capable of, they purchased one of the machines and it’ll make its Compass Group debut with Eurest Services facilities Management Company, for their education-based clients. The Neo does have plans to increase it’s visibility with other Compass services, with Molina and Sheikh both noting their interest in seeing the machine tackle other environments.

One of the more interesting aspects of the Neo is its ability to adapt to its environment it finds itself in. For example, Molina says Neo can be modified to work in an industrial setting so it slows down at intersections. The machine can be fitted with additional sensors that track fast moving objects like forklifts. The addition of a blue light attached to the front of a Neo would help track the machine from a distance. Additionally, Neo also uploads real-time data to a web portal as to how much area the robot has cleaned and how much water is being utilized.

As an autonomous cleaning robot, Molina and Sheikh say Neo cuts down on production costs and shifts the focus of the cleaning teams to other areas of the job.

“The Neo has proven to be a cost-effective and productive tool for our operations team, allowing us to maintain our commitment to continuous improvement and innovation for our clients,” says Paul Rocha, VP Operations for Eurest Services
www.avidbots.com