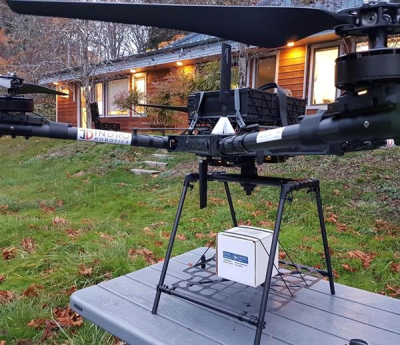 B.C.-based InDro Robotics Inc. announced it has received Canada’s first approval from the Canadian Transportation Agency (CTA) to operate a domestic air service, using drones for the carriage of cargo.
With the new cargo carrying license, the company’s Heavy Lift Wayfinder Drone will be able to ship cargo up to 25km. The company says its researchers are currently working expand that distance 200 km in the near future.

“This permission until now has only ever been issued to airlines and paves the way for (literally) much wider range of drone use,” says InDro Robotics CEO, Philip Reece. “We have had several successful missions carrying medication and other health-related items to remote areas. This new license means we can ship anything up to 10kg (other than people and animals) – basically anything a manned aircraft could.”

Over the past few months, InDro Robotics has been working with regulators, air operators and the Vancouver Island Health Authority to establish a rapid way of providing COVID related Drone support to a number of communities, hospitals and medical centres in British Columbia. In 2019, the company worked with Canada Post and London Drugs to successfully test Drone delivery of emergency medications over the Pacific Ocean. The Drone travelled over the Pacific 6 km in 11 minutes from Duncan B.C. to Salt Spring Island.
https://indrorobotics.ca