Building the future of nuclear through responsible waste disposal

Plans have been laid for the construction of a highly engineered radioactive waste disposal facility in Chalk River, Ontario. The facility is being proposed as a permanent and modern technological solution to an environmental issue that goes back almost a century.

Today, Canadian Nuclear Laboratories (CNL) is seeking the support of the industry and its supply chain to move this project forward and advance the future of waste disposal in Canada.

Canada’s storied Chalk River Laboratories was established in 1944 on the Ottawa River, about 180 km (114 miles) from the City of Ottawa. An adjacent community, the Town of Deep River, was developed to support the site and remains home to generations of employees. The site is located on the traditional and unceded territory of the Algonquin Nation.

For decades, Chalk River Laboratories has been the centre for Nobel Prize-winning physics research, engineering technology and neutron science. Among its best-known legacies are the CANDU® reactor and the development of medical isotopes that benefitted millions of people around the world through cancer diagnosis and treatment.

Today’s Chalk River Laboratories provides essential support to Canada’s carbon-reducing nuclear energy industry, contributes to new innovations in medical isotopes, and is a leader in the investigation and analysis of reactor components to ensure safety and compliance.

It’s not just the mandate that’s changing, though.

The new site entrance building is a visitor’s first indication of the Government of Canada’s C$1.2 billion investment to modernize the laboratories and revitalize the site. Honoured by the Algonquins of Ontario with the name Minwamon, meaning “clear path,” it is one of three new buildings that use wood as the main structural material, reducing the carbon footprint of the campus.

The revitalization of the Chalk River campus is enabling Canada to continue its history of life-changing and forward-thinking science and technology. In the centre of the site is the new LEEDS-certified Harriet Brooks building, a world class material science laboratory named after the first Canadian female physicist, who is recognized for her important contributions to atomic physics.

CNL is the company overseeing this revitalization – CNL manages the laboratories at Chalk River, along with several other government-owned nuclear sites and facilities. 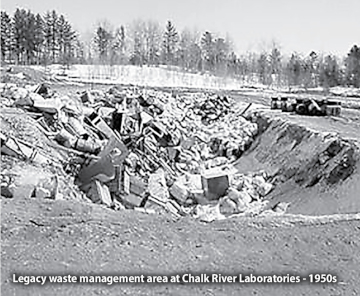 It’s not surprising that decades of innovative research and development has resulted in waste by-products; so has the demolition of more than 100 aging structures – in the form of building debris and decommissioning material. While CNL has been storing the waste onsite using industry best practices, regulations in Canada are changing and this is not a permanent solution.

Waste management is a challenge facing the entire nuclear industry. CNL is once again using leading-edge technology to put forward a long-term environmental solution. Taking guidance from domestic and international experience, CNL has proposed an engineered containment mound – the Near Surface Disposal Facility, or NSDF – as the solution for low-level radioactive waste at Chalk River Labs.

As a fundamental component in the revitalization of the Chalk River campus, the NSDF is critical to both the long-term protection of the environment and to the continued development of breakthroughs in nuclear science and technology.

“Chalk River Laboratories is undergoing a transformative change that will propel CNL into the forefront of nuclear research in Canada and the world. The Near Surface Disposal Facility is key to this revitalization,” said Kristan Schruder, CNL Deputy Vice President of Environmental Remediation Management.

The proposed facility will include the construction of a highly engineered containment mound, site infrastructure and waste water treatment facilities. The project is estimated to cost C$365 million. A skilled workforce of 225 to 300 people will be needed to build it from the ground up. If CNL’s proposal is approved by Canada’s nuclear regulator, the Canadian Nuclear Safety Commission, construction of the NSDF is anticipated to start in the fall of 2022. 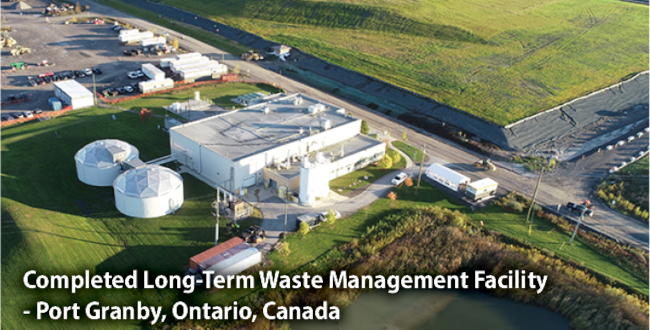 CNL has successful experience with the engineered containment design through the construction and operation of waste management facilities in the two Southern Ontario communities of Port Hope and Port Granby, located about 100km (60 miles) east of Toronto on Lake Ontario. In 2021, CNL completed the closure of the engineered aboveground mound in Port Granby, with 1.3 million tonnes (1.4 million tons) of contaminated soil and industrial waste placed in the mound for safe, long-term storage.

The design technology specific to the NSDF has been tested extensively. The facility will use natural and synthetic barriers that work together to isolate the waste from the environment for generations. Testing on the synthetic geo-membrane done at Queen’s University concluded the membrane will stay intact for more than a thousand years – much longer than the time it will take for the radioactivity contained in the facility to decay to a safe level.

The mayor of Deep River, Sue D’Eon, is a strong supporter of the NSDF. She champions the proposal as protective of the environment and critical to industry and business development in the area.

“CNL is a collaborative neighbour and an excellent employer. We view the proposal to build a facility for the safe disposal of low-level radioactive waste as a responsible action and a benefi­t to the entire community that demonstrates CNL’s careful stewardship of the environment,” said D’Eon.

The NSDF proposal is nearing the end of a five-year, federally regulated environmental assessment and the Canadian Nuclear Safety Commission has scheduled a public hearing starting in May of this year to consider CNL’s proposal. Anyone can participate in the hearing process by submitting a written intervention or letter of support to the Commission by April 11.

“We are asking for the support of our partners in business and industry to help us demonstrate to Canada and the world that the nuclear industry and its supply chain is well prepared to advance from temporary waste storage to permanent disposal – both technically and in terms of our workforce.” said Schruder.

At CNL, we are committed and prepared to implement this modern solution to an old environmental problem.

Let’s use our know-how to build a better future, together – let’s say yes to NSDF.
www.cnl.ca