The search for the most ingenious student inventions has begun with the launch of the 2010 James Dyson Award. In previous years, the international student design competition has inspired problem-solving inventions including a GPS system for guide dogs, flat-folding plugs, and a paper cast that can be used in disaster relief.

–
Founded by James Dyson, engineer, entrepreneur and inventor of the famed Dyson vacuum, the award celebrates student designers. Its aim is to inspire the next generation of engineers. The competition vets student designs from across the globe, with a grand prize of √Ç¬£10,000* for the young designer, and another √Ç¬£10,000* for the student’s university. The deadline for entries is July 1, 2010. 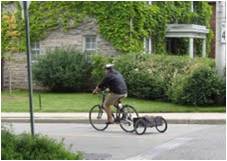 The award is James Dyson’s call to action to motivate and educate students about design engineering. “Making things is not about grime and grease, but solving real life problems,” says Dyson. “Now is the time to commit to design and engineering, and to the generations that will define our future.”

Out of more than 400 entries, last year’s winner was Automist, a kitchen sink attachment that detects and extinguishes fires with a fine water mist. The project was developed by British students Yusuf Muhammad and Paul Thomas from the Royal College of Art in London, England.

“Winning the James Dyson Award has enabled us to transform our idea from a prototype into a viable product – which we’re now close to being able to sell,” says Muhammad. “Without this kind of support, our ideas might be stuck on the drawing board and in the workshop. James Dyson’s endorsement has really opened doors for us.”

A nominee from each country will be invited to Dyson laboratories to participate in a workshop run by Dyson engineers. The esteemed panel of judges includes:
Jennifer Taggart, ARIDO
Dr. Ramin Sedaghati, Concordia University
Dr. John Runciman, Guelph University

James Dyson will announce the global winner on October 5, 2010.

The award is open to any student of design who is studying or studied in Australia, Austria, Belgium, Canada, France, Germany, Holland, Italy, Ireland, Japan, Malaysia, New Zealand, Russia, Singapore, Spain, Switzerland, UK and USA. The contest is also open to graduates within four years of graduation.

Students can enter the James Dyson Award at www.jamesdysonaward.org. In addition to completing an application form, students can submit footage, images and sketches of their ideas, along with stories detailing their design process and inspiration.

For more information, students can call 1-866-366-7733 x 295 or e-mail jamesdysonaward@strategicobjectives.com