Kitchener’s Avidbots rides trend towards automation in the cleaning industry. 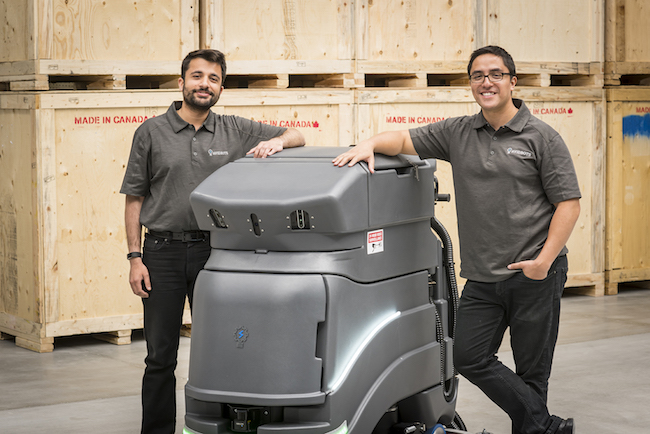 HALIFAX – Canadians venturing out into commercial spaces for the first time since the pandemic began may spot some made-in-Canada technology whizzing around, keeping the high-traffic floors squeaky clean.

Autonomous floor scrubbers are increasingly being used at airports, hospitals, universities, sports facilities and shopping malls as COVID-19 sharpens the public’s focus on the cleanliness of public spaces.

While some may wonder if the robots are eliminating workers’ jobs, the entrepreneurs behind the futuristic scrubbers say that’s not the case, as the commercial cleaning industry struggles with a perennial labour shortage.

“People are not getting fired after a company buys a Neo,” said Faizan Sheikh, co-founder and CEO of Avidbots, a Kitchener, Ont., company that designs and manufactures the Neo autonomous commercial floor cleaner. “The natural attrition rate is very high.”

The COVID-19 health crisis called attention to the high turnover rate in the cleaning industry and the challenges and importance of keeping public spaces clean, he said.

“What the pandemic did was it really shone a light on the value of clean,” Sheikh said. “There’s a very long-standing trend towards automation in the cleaning industry and the pandemic has accelerated that progress.”

Faizan and his co-founder Pablo Molina launched Avidbots in 2014 after graduating from Mechatronics Engineering – or robotics – at the University of Waterloo.

The entrepreneurs, originally from Pakistan and Ecuador, both grew up fascinated with shows like “The Jetsons” and Japan’s “Jiban” and wanted to see robotics in everyday life.

“We were frustrated that robotics weren’t going anywhere, that we weren’t surrounded by robots everywhere,” Faizan said. “It came to a point where we could actually do something about it or stop talking about it.”

They focused on commercial cleaning to start and developed one of the world’s first commercial robotic floor cleaners, called the Neo.

The company has grown from two employees and a mission to make robots ubiquitous to a staff of more than 250 in its Kitchener headquarters and offices in Chicago, South America, Japan and South Korea.

Faizan declined to discuss how the pandemic has affected Avidbot sales, but said that demand for its products has increased.

The autonomous floor scrubber – what some have described as a robotic mini-Zamboni –cleans up to 3,900 square metres an hour. It’s outfitted with multiple sensors to detect and avoid obstacles in its path, the company says.

Unlike traditional walk-behind floor scrubbers, the Neo only needs a human to press start and can operate for up to six hours without a recharge.

The robots are now in more than 75 commercial facilities across Canada, including retail malls, warehouses and educational facilities, and expanding quickly around the world.

The robots don’t come cheap. The newest iteration, called the Neo 2, costs US$67,000 up front, plus an additional US$9,700 a year from the second year onwards to cover maintenance and software upgrades.

The company has also developed a disinfection sprayer add-on that can sanitize high-touch surfaces like railings, doorknobs and water fountains – areas that have been the focus of increased cleaning during the pandemic. The add-on is US$8,500 up front, then US$3,000 a year from the second year onward.

While some might question the cost, Faizan says the robot allows workers to focus on other tasks.

In some cases, he says workers who operate floor cleaners have another duty, such as driving a forklift or packing boxes. The robot floor cleaner frees them up to focus on those revenue-generating activities, he says.

In commercial spaces with dedicated cleaning professionals, human cleaners are able to increase the frequency of cleaning and sanitizing in other areas like washrooms and high-touch surfaces, he says.

“You can guarantee that cleaning happens,” Faizan says. “When the pandemic happened and even still now, retailers are talking about the efforts they are taking to keep customers safe, including better cleaning and sanitation. This is a proof point.”

“It’s programmed to stop if it comes within a certain number of feet of someone, so it’s more effective after hours,” he says. “It does a great job and saves energy and water.”

The mall purchased a second robot cleaner during the pandemic, freeing up cleaning staff to focus more on other areas, Correia says.

“We haven’t let any staff go because of a robot, but we’ve definitely reallocated some of the resources and it’s made us better for sure.”

It’s an investment that has paid off, especially during the pandemic when passengers are more concerned than ever about cleanliness and sanitation, he says.

“People just stand and stare on the robots, there’s still a wow effect,” Benani says. “We put a smiley face on ours so it looks friendly and children are very amused when they see it.”

While the airport outsources cleaning to a service provider, he says the robots ensure the airport is kept to the highest standards of cleanliness.

“This is additional cleaning,” Benani says. “We don’t tell our providers, `We’re going to give you robots, so we you can afford to let go two or three people.’ It’s not a replacement strategy, it’s enhanced cleaning.”
www.avidbots.com