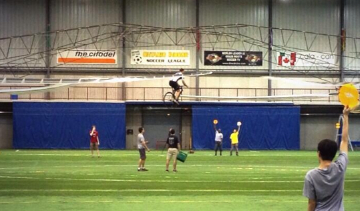 AeroVelo, a Toronto-based group of student and professional engineers, says its human-powered helicopter, the enormous four-rotor Atlas, may have at last won the Igor I. Sikorsky prize. Unclaimed since its inception in 1980, the aerospace competition promises a $250,000 purse to the first team to push a human-powered helicopter above 3 meters for more than 60 seconds while staying within a 10 by 10 meter target “box”. Since May, the team has been running test flights at the Soccer Centre in Vaughan, Ontario in hopes of capturing the elusive prize.

“Atlas and its human engine rose to an altitude of roughly 3.3 metres, maintained flight for approximately 65 seconds and drifted no more than 10 metres,” an update to AeroVelo’s web site read on June 14. “This is an unofficial account of yesterday’s events, and though we would love to say more, we will be awaiting official validation before making any statements or posting any pictures.”

On the heels of AeroVelo’s post came a similar announcement from the Canadian group’s U.S. rivals at the University of Mariland whose Gamera II helicopter reportedly broke the 3 meter mark but drifted out of the 10 by 10 airspace at the 48 second mark. Currently, the American Helicopter Society, which oversees the Sikorsky prize, is studying the data from AeroVelo’s attempt to confirm whether it has won the competition.

If so, it won’t be the first world record setting achievement for the group. The team, headed by engineers Cameron Robertson and Todd Reichert, were the first in history to achieve human-powered flight of a flapping wing aircraft (an ornithopter called the Snowbird) in 2010 and also set a human-powered land speed world of record 116.9 km/hr in 2011.