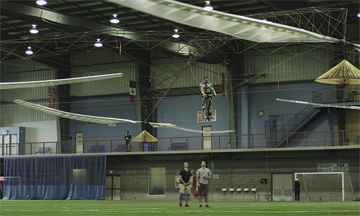 Atlas at the peak of its historic flight on June 13th, 2013. (Photo courtesy of Martin Turner – Visiblize.com)

Sikorsky Aircraft Corp. announced today that Toronto’s AeroVelo Inc. has won the $250,000 AHS Igor I. Sikorsky Human Powered Helicopter Competition, that had gone unclaimed for more than 30 years. AHS and Sikorsky Aircraft presented the award at a special ceremony today at The Soccer Centre in Vaughan, Ontario where the record-breaking flight was conducted on June 13.

The Toronto-based AeroVelo team, led by pilot and chief engineer Dr. Todd Reichert and co-chief engineer Cameron Robertson, and comprised largely of students at the University of Toronto, beat the 33-year old challenge last month, flying its “Atlas” above 3 meters (9.8 feet) and hovering for approximately 64 seconds. Officials from the American Helicopter Society (AHS) International verified the flight data over the past few weeks and concluded it meets all of the criteria necessary to win the competition.

More than 20 human-powered helicopters have been designed and built since the competition began, though only a handful have gotten off the ground. Recent teams contending for the prize include the University of Maryland’s Gamera and the California Polytechnic State University team with its Upturn aircraft. The most successful competitors from the 1980’s and 1990’s included a student team at California Polytechnic State University with its DaVinci III helicopter and the team at Nihon University flying the Yuri I, which previously held the world HPH endurance record at 19.5 seconds.

AeroVelo’s Atlas vehicle is the largest human-powered helicopter to have flown, and the first in Canada, with each of its four rotors measuring nearly 70 feet. The airframe is constructed of very light carbon tube and polymer weighing only 115 lb, with a highly modified bicycle frame pedaled by the pilot. It first flew in August 2012.

“This is an incredible accomplishment,” said Mike Hirschberg, executive director of AHS International. “For a third of a century, the AHS Sikorsky Prize has eluded the best minds and technology available. The technological and theoretical advancements achieved in pursuit of our challenge have been astounding.”