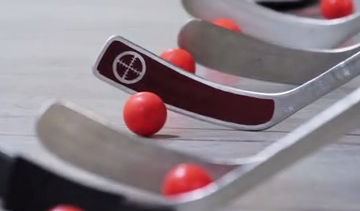 While composite hockey sticks are favored for their light-weight and performance relative to wood, they tend to break under competitive play conditions. And at around $300+ a pop, the costs and annoyance can tally up quickly.

At least it did for Daniel Lucchesi, whose start-up company, Toronto-based Colt Hockey, is creating a composite stick covered in nano-tech cladding that’s purported to make the sticks virtually unbreakable yet without making them heavier or inflexible.

“The Colt started from the desire to build a hockey stick that could withstand the pressures of the roughest game in the world,” Lucchesi says in the product’s Kickstarter.com “pitch” video. “The Colt was developed to be the world’s first high performance hockey stick, innovatively engineered without compromising weight or durability.”

The answer, he says, came from another Canadian company, Integran Technologies. The Toronto-based firm licenses a process called Nanovate CoP (PowerMetal for its sporting goods clients), originally designed for coating hydraulic components for the aerospace and defense markets.

Similar in concept to chrome plating, Nanovate CoP elecroplating can coat most materials with a thin layer of nanocrystalline Cobalt that imparts steel-like durability to nearly any material. Its strength, the company says, comes from the nanoscale of the metal’s grains (10-100 nanometres as opposed to 10 microns for polycrystalline metals). Now, Lucchesi and his partners hope Inegran’s process will reinvent the hockey stick, provided they can get the backing to further develop, test and produce the Colt in large quantities. As things stand, the prospects look good. The Colt was one of the first projects on the newly launched Kickstarter Canada crowdfunding site and its popularity took off quickly. According to kicktraq.com, the project is already half way to meeting its goal of $75,000 and, at its current pace, will reach approximately 160 percent of its target funding by the campaign’s end.
www.colthockey.com
www.integran.com