European Space Agency (ESA) announced that it has recently tested a wall-climbing robot developed at Simon Frasier University and found that the gecko-foot inspired technology may be suitable for space missions, potentially leading to hull-crawling automatons tending future spacecraft.

The SFU climbing robot, called Abigaille-III, has six legs with four degrees of freedom each, allowing the robot to transition from vertical to horizontal and back. Key to the robot’s abilities, though, is a dry adhesive, developed at SFU, which mimics feet of geckos and allow it to adhere to diverse surfaces. 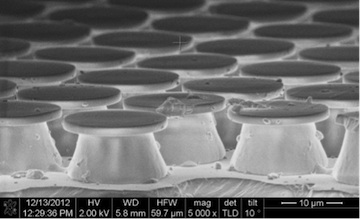 Gecko “stick” due to microscopic hairs (100–200 nanometres across) on their feet that take advantage of van der Waals forces, molecular attractions that operate over very small distances. SFU engineering scientist Carlo Menon says his team borrowed techniques from the microelectronics industry to create “footpad terminators” similar to the a gecko’s nanoscopic hairs.

Interested in assessing the adhesive’s suitability for space, the ESA tested the adhesive in its Electrical Materials and Process Labs, based in the Agency’s ESTEC technical centre in Noordwijk, the Netherlands, with additional support from ESA’s Automation and Robotics Lab.

“A depth-sensing indentation instrument was used inside a vacuum chamber to precisely assess the dry adhesive’s sticking performance,” said ESA’s Laurent Pambaguian. “Experimental success means deployment in space might one day be possible.”

Since joining SFU in 2007, Menon’s research program has focused on bio-robotics and smart materials. The space research was supported by the ESA’s Network/Partnering Initiative, enabling it to work with universities carrying out research with the potential for space applications.
http://menrva.ensc.sfu.ca
www.esa.int