Based out of Richmond Hill, ESI is poised to ride the latest surge in the robotics community with their C-series line of products. 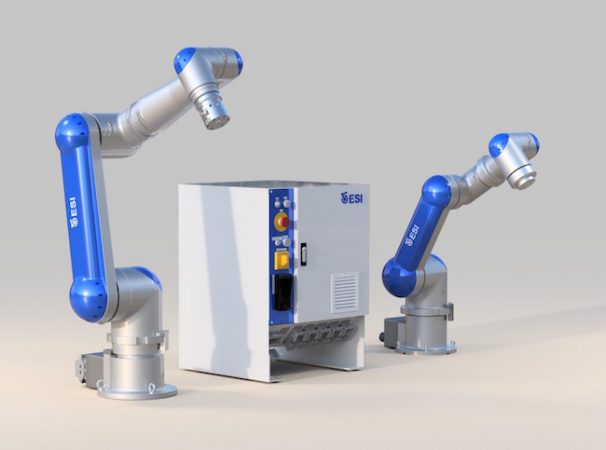 One of the biggest trends in robotics at the moment is collaboration – man and machine working in the same space, without the need for protective zones or other safety measures. In fact, it’s the fastest growing robotics sector, according to an industry analysis by ABI Research.

Between 2016 to 2025, the market-foresight advisory firm predicts, global revenue of collaborative robotics shipments will reach a CAGR of 49.8 percent, compared to 12.1 percent for industrial robots and 23.2 percent for commercial robotics. Although the cobot market is still relatively small at present (reaching approximately $292 million last year) that figure is expected to balloon to $1.23 billion in global revenue by 2025.

One Canadian company poised to ride that surge is Toronto’s Engineering Services Inc. (ESI). Founded in 1982 by the University of Toronto robotics professor, Dr. Andrew Goldfarb, ESI’s original vision was to bind research to practical execution. At the time, Dr. Goldfarb acted as a one-man consulting firm while maintaining his teaching position.

Over its 37 year history, ESI pursued multiple robotics sectors and was purchased by SuperRobotics Ltd. in 2015. Today, as an R&D subsidiary of Shenzhen Anzer Intelligent Engineering Co., the bulk of its product line focuses on mobile and consumer robots. ESI’s TRACKER III-L Police EOD Robot, for example, leads ESI’s explosive ordnance disposal line while the anthropomorphic VCTR and HRR UMEBOTs are intended for telepresence applications. 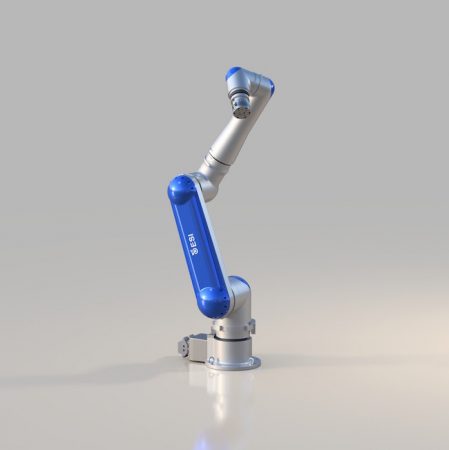 Most recently, however, the Canadian robotics company has ventured into the industrial space, with the unveiling of its C-15 and C-5 collaborative robots. According to Matt Gryniewski, ESI’s director of sales and marketing, the industrial cobots will be their most successful line to date.

“This is a market that’s growing at a phenomenal rate and it’s at a point where people are no longer asking what a cobot is, but are asking how they can implement one into their systems to boost the quality of production,” Gryniewski says. “We’re ramping up production of the cobots to meet market demands. The other focus is to continue our R&D developments, which includes autonomous navigation of robots. We’re using that academic flair to make our products better.”

The C-5, the smaller of the two, is designed to work within hazardous industrial environments and aligns with Expib IIBT4 /Exib IIBT4 – two safety compliance methods that categorize this type of machine as “intrinsically safe.” From general assembly to handling hazardous materials, the C-5 is equally safe for human collaboration as is its bigger brother, the C-15.

The larger 6-axis C-15 weighs in 100kg and spans a workspace radius of 1,323mm. The cobot can handle a rated payload of up to 15kg, with repeatability of ±0.05mm, and is equipped with sensor fusion technology for impact prevention and contact detection. Safe for human collaboration, the C-15 is meant for labor-intensive assembly lines, precision machining, grinding, polishing, welding and material welding.

Both models feature hand-guiding and floating modes that allow the cobots to be manually “taught” complex tasks without programming expertise. In addition, the cobots are controlled by a multi-core industrial PC that enables hand guiding mode, dynamic and quasi-static contact detection and an optional 3D safety vision system.

Infinitely Repeatable
It’s the metalworking capabilities of C-15 that caught the attention of North America’s largest auto parts manufacturer, Aurora, ON-based, Magna International.  The Stronach Centre for Innovation—Magna’s R&D division—chose ESI following an industry analysis and scouting exercise. Ultimately, the project is an exercise in consistency. While sanding doesn’t require much experience, it takes most of the time in the process. The robot can free the operators from the repetitive sanding of a roof panel and let them concentrate on the skilled tasks in hand finishing.

The sanding project is the first project with SCFI and ESI. Together with ESI Robotics, SCFI developed an automatic sanding workstation with this robot. The C15 cobot is capable of a broad range of work while maintaining a high degree of precision (±0.05 mm) and accurate path-behavior, both of which are critical for the sanding process that it is currently used for. During the automatic sanding process, the C15 robot precisely regulates the prescribed contact pressure in all positions via its force torque sensor.

Introductions were made prior to a trade show which led to multiple meetings and an eventual collaboration on the project, which SCFI saw as testbed for future work.

“The goal was to use the collaborative robots in an industrial manner so that we could achieve Class A quality,” says Aldo Van Gelder, general manager of the Stronach Centre for Innovation. “The panel chosen was a roof and we worked through it step-by-step including the implementation and requirements for force control to develop what is required for a Pathfinder, to give an example.”

According to Van Gelder, when Magna introduced ESI’s C-15 arm into its production lineup, they saw a 50 percent increase in production due to improved consistency and repeatability. Additionally, implementing the C-15 cobot reduced the work area footprint by 40 percent and doubled their output for finished products. Van Gelder is optimistic about the future use of cobots within Magna’s operations, pointing to pick-and-place applications as well as the ability to automate machine tending – a tedious and repetitive task for a traditional workforce.

“The reason this development project happened with ESI is because they were open to developing this specific prototype project with us,” Van Gelder says. “With many of the other companies, you’d have to do this independently or through an integrator.”

According to Gryniewski, both the C-5 and C-15 models are ready to be shipped and implemented onto factory floors, and by the end of the year Gryniewski they should have the cobots in place. Their initial project was successful and both parties are now looking at additional applications the cobots could be useful for.

Beyond the cobots, ESI has other machines currently on the market that are rife with potential given the current autonomous navigation trend in robotics. For example. Gryniewski says ESI is currently working on a form of GPS navigation for in-home robotics that would allow for larger-sized assistance robots. He compares it to a Roomba but with additional functions like carrying trays of food or cleaning large spaces.

“There are a ton of companies working on autonomous cars,” Gryniewski says. “This is part of what will bring robots from the industry into the home: It’s the ability for the robot to move around by itself. One of the classic examples is the Roomba. We’re working on a system that will be able to do that with robots of larger sizes. They’ll be able to navigate from the living room to the kitchen and be able to assist you with carrying something behind you.”