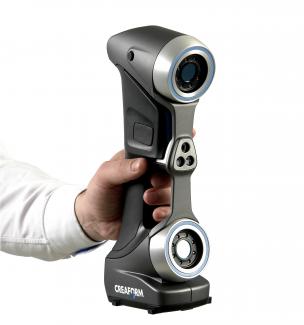 Quebec-based Creaform announced that it has completely re-engineered all its hand-held 3D scanners, including the HandySCAN and GO!Scan lines. For example, the new HandySCAN 300 and HandySCAN 700 sport a significant redesign from the company’s original 3D scanners. Beneath the surface, though, the company says its latest HandySCANs are 40 percent more accurate (volumetric accuracy of 60µm/m) and 25 times faster than the former generation.

Creaform has also boosted the capabilities of its entry-level Go!SCAN line, as well. The Go!SCAN 50, designed for measuring larger parts, and the Go!SCAN 20, for smaller objects with intricate details, now feature accuracy up to 0.1 mm (0.004 in.) and resolution of up to 0.2 mm (0.008 in.). According to the company, both models produce meshes with captured color maps of typical objects in under five minutes with little to no preparation.
www.creaform3d.com