The time has come that a surgeon, sitting at home in PJs (or nighty) can remotely remove a dysfunctional body part from a patient on the opposite side of the world.

The means and the technology are in place – though not from home but from a hospital console – well clear of interference from the family cat.{nomultithumb}

This technology pairs the dexterity of the human hand with the decision-making capacity of the human brain. It never panics, it doesn’t need to sleep, and it’s free from niggling irritations that can lurk in the human mind – and it doesn’t even bother to breath. It is, in fact, the Da Vinci surgical robot.

From a console in St. Joseph’s Hospital in Hamilton, ON, a surgeon controls a robotic surgeon in another hospital, incising, stitching and removing or repairing body parts as required.

The technology for remote surgery (telesurgery) is now well advanced and it exposes patients to world-leading expertise and better healthcare without having to travel.

The birth of telesurgery began with the interest in space travel and was an outgrowth of the robotic doctor, an idea that was conceived when NASA suggested that researchers look into the option of remote-controlled robots to treat astronauts in space.

But like other technologies developed for military applications the transfer to civilian use is not without precedence and in 2001 the first transatlantic procedure, a 45 minute minimally invasive cholecystectomy, was conducted by a French surgeon (Dr. Jacques Marescaux) in New York on a patient in Hôpital civil, Strasbourg.

The publicity and success of the procedure, known as the Lindberg Operation after Charles Lindberg, the first aviator to cross the Atlantic, led a robotic team to use the same technology in Canada with Bell Canada’s public Internet between Hamilton and North Bay, ON.

While operation Lindbergh used the more expensive ATM fibre optics communication to ensure reliability and success of the first telesurgery, the follow on procedures in Canada used standard public Internet that was provisioned with QOS using MPLS QOS-MPLS.

A series of complex laparoscopic (light tube assisted) procedures were performed with expert clinicians supporting the more experienced surgeon who was remotely operating on the patient. This resulted in the patient receiving the best care possible while remaining in the hometown, the less experienced clinicians gained valuable experience, and the expert surgeon stayed home.

The robotic team’s goal was to advance Lindbergh’s proof of concept to a real-life solution. This was achieved with over 20 complex laparoscopic operations between Hamilton and North Bay.

Although the Zeus robot in North Bay lacked some it the features of the Da Vinci robot at St. Joseph’s Hospital, the surgeon Dr. Mehran Anvari said, other than the location, its operation is not much is different. “It’s the same as if I were sitting in the operating room,” he says.

“I have both my hands on the robot in the same way I would have instruments in both hands.” He moves the robotic camera that serves as his eyes, and can speak with the nurses in the remote operating room with the patient, and give them instructions. “Basically, it’s the same as if I were next to the patient, just using telecommunication and robotics. It doesn’t feel different.” 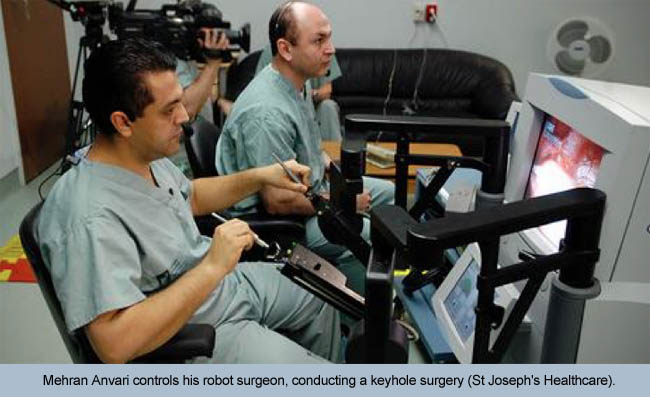 In the past few years, better landlines and hard-wired Internet connections have made lag time less of an issue. When Anvari operated on his first set of patients, there was a delay of about 175 ms that is imperceptible but with distance, the risk increases and lag time and interruptions can risk disaster.

“It’s not realistic to expect these robots to go into autopilot mode and finish the surgery,” said Tamas Haidegger, a researcher at Obuda University in Budapest who studies space telesurgery.

“This will certainly be an issue for operations conducted at great distances – such as in deep space or Mars. Out there, robots that use algorithms and databases to make decisions during surgery will be required,” said Mangai Prabakar, an engineer at Florida International University who designs smart robots.

“If they can just maintain the communication link between Earth and the space shuttle, then they can be guided by the surgeon on earth,” Prabakar said.

“But Mars is really far, and we can’t communicate over such a huge distance (yet). We’re going to have to build robots that we can trust to do full surgeries without a human guiding the scalpel on Earth. And that will require incredibly powerful computers.”

Meantime, back in Hamilton, Ontario, surgery is getting closer to getting further away.