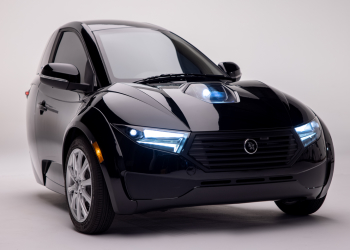 ElectraMeccanica Vehicles Corp, a designer and manufacturer of electric vehicles, announced it has selected Mesa, AZ, in the greater Phoenix area, for its U.S. based assembly facility and engineering technical center for the company’s SOLO EV.

Designed for a single occupant, the SOLO is a three-wheeled, all-electric solution vehicle with a 100-mile range and a top speed of 80 mph. Capable of highway driving, the small EV features front and rear crumple zones, side impact protection, roll bar, torque-limiting control, as well as power steering, power brakes, air conditioning and a Bluetooth entertainment system.

The company says the proposed facility will support ElectraMeccanica’s strategic plan to meet anticipated demand. When fully operational, it is expected to create up to 500 new jobs and will be capable of producing up to 20,000 SOLOs per year, the company says.

According to ElectraMeccanica, the facility will feature both a light vehicle assembly plant and an engineering technical center with multiple research labs as well as vehicle chassis, battery pack and power electronics testing workshops.

In addition to consumer interest in the SOLO EV, the company has seen growing interest in commercial fleet and utility applications. Consequently, the company says it plans to work with local municipalities to initiate a future pilot SOLO share ecosystem in the Mesa and the greater Phoenix region.
www.electrameccanica.com