Alberta leads the nation in highest hourly wage across nearly all jobs, Stats Can report says. 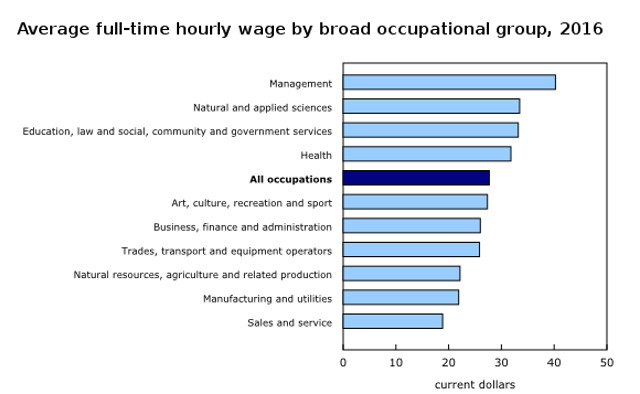 According to data drawn from Statistics Canada’s Job Vacancy and Wage Survey (JVWS) for 2016, engineering is among the best paid occupations in Canada. The survey provides comprehensive information on average hourly wages paid to full-time employees by detailed occupation and economic region. Compensation is reported as average full-time hourly wage paid before taxes and deductions and excludes overtime pay, tips, commissions, bonuses, etc.

Across broad occupational groups, those in natural and applied science jobs brought home the most on average, second only to the management group. Full-time employees in science occupations had an average hourly wage of $33.45 in 2016, compared with $33.20 for occupations in education, law and social, community and government services. Within natural and applied sciences occupations, petroleum engineers had the highest hourly wages at $62.75. That group also had the largest share of full-time employment (94.0%) among all broad occupational groups.

In fact, six of the seven economic regions in Alberta were part of the nation’s top 10 for the highest average hourly wage. Wood Buffalo–Cold Lake, Alberta ($36.50), followed by Nunavut ($35.95), the Northwest Territories ($34.20) and Calgary, Alberta ($32.60) were the economic regions with the highest hourly wages. Among all provinces, Alberta had a relatively high average hourly wage in every broad occupational group except in art, culture, recreation and sport occupations, and in sales and service occupations.
www.statcan.gc.ca