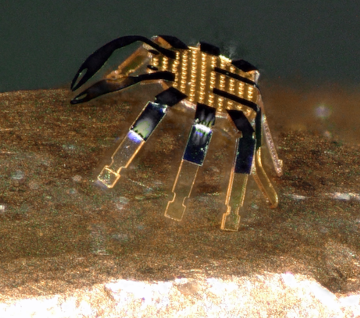 A magnified view of the tiny crab robot, standing on the edge of a penny.
(Photo credit: Northwestern University)

Engineering researchers at Northwestern University announced the development the world’s smallest remote-controlled walking robot, fashioned to resemble a peekytoe crab. Measuring a half-millimeter wide, the tiny robot can not only walk but also bend, twist, crawl, turn and jump.

To power these moves, the crab is constructed from a shape-memory alloy that returns to a previous shape when heated. In their experiments, the researchers used a scanned laser beam to rapidly heat the robot at various locations across the crab robot’s body.

As the heated location cools, a thin glass coating returns heated structure to its original shape. This cycle of heating and cooling allows the researchers to remotely control the robot. Scanning the laser from left to right across the tiny crab robot, for example, causes it to move from right to left.

In addition to the crab, the research team has also created millimeter-sized robots resembling inchworms, crickets and beetles as well as a winged microchip, last September, that qualified as the smallest-ever human-made flying structure.

The researchers see their work as exploratory at this point, but say they are moving field closer to realizing micro-sized robots that can perform practical tasks inside tightly confined spaces.

“Robotics is an exciting field of research, and the development of microscale robots is a fun topic for academic exploration,” said John A. Rogers, who led the experimental work. “You might imagine micro-robots as agents to repair or assemble small structures or machines in industry or as surgical assistants to clear clogged arteries, to stop internal bleeding or to eliminate cancerous tumors — all in minimally invasive procedures.”

The research will be published in the most recent issue of Science Robotics.
www.northwestern.edu