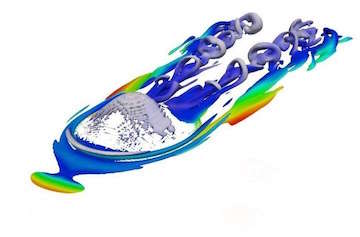 A 3D computer simulation of air flowing over a hill creating turbulence at transonic speed. The ring-like features are eddies of air. (Photo credit: James Chen/University at Buffalo)

Flying from Los Angeles to New York City in an hour sounds great but a sky full of supersonic-capable planes breaking the sound barrier (767 mph) along with the characteristic sonic boom would ruffle more than a few feathers.

To lessen this problem and make super or even hypersonic commercial flight viable, University at Buffalo aerospace engineer, James Chen, is working to solve problems associated with exceeding the sound barrier investigating how air acts at super and hypersonic speeds.

“Reduction of the notorious sonic boom is a just a start,” says Chen, PhD, assistant professor in the Department of Mechanical and Aerospace Engineering at UB’s School of Engineering and Applied Sciences. “In supersonic flight, we must now answer the last unresolved problem in classical physics: turbulence.”

“There is so much we don’t know about the airflow when you reach hypersonic speeds,” he adds. “For example, eddies form around the aircraft creating turbulence that affect how aircraft maneuver through the atmosphere.”

Traditionally, engineers have used wind tunnels or direct numerical simulations (DNS) to solve such aerodynamic problems. However, those methods, he says, breakdown when it comes to studying turbulence patterns at super and hypersonic speeds.

Instead, Chen work focuses on morphing continuum theory (MCT), which provides computationally friendly equations and a theory to address problems with hypersonic turbulence.

“The Center for Computational Research at UB provides a perfect platform for my team and me at the Multiscale Computational Physics Lab to pursue these difficult high-speed aerodynamics problems with high-performance computing,” says Chen.

Ultimately, Chen says his work could lead to better supersonic and hypersonic aircraft design, including everything from the vehicle’s shape to what materials it is made of. The goal, he says, is a new class of aircraft that are faster, quieter, less expensive to operate and safer.
http://engineering.buffalo.edu