From 2024, Allkem’s James Bay project expected to produce lithium for up to two decades. 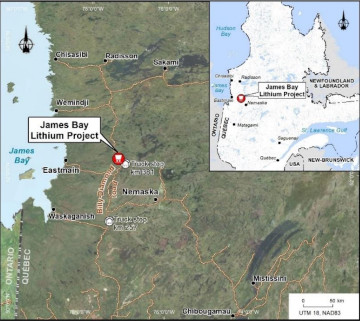 The 36-page approval uses the boilerplate language for Impact Assessment Act decisions, indicating that the minister has determined following a review that the project is “not likely to cause significant adverse environmental effects.”

In a tweet publicizing the approval Guilbeault said the mine will go ahead in partnership with local Cree communities.

“This is what a good project is all about and these critical minerals are key to building a low-carbon economy,” he said.

The James Bay mine is expected to produce lithium for up to two decades, mainly for use in North America’s electric vehicle and battery manufacturing industries.

Demand has soared for lithium used in lithium-ion batteries to charge consumer electronics and for renewable energy supplies and storage. More than half the world’s lithium supply in 2021 went to electric vehicles, an amount expected to triple by 2025. By 2030, demand for lithium is expected to grow at least 500 per cent.

Lithium is one of the six critical minerals identified as a priority in the federal government’s new critical minerals strategy, which aims to make Canada a global mining powerhouse for the metals and minerals used in the electric vehicle industry.

The only active lithium mine in Canada today is owned and operated by China’s Sinomine Resource Group in northern Manitoba and all of that lithium is shipped to China.

China is the dominant player in lithium processing, and processed two-thirds of the world’s supply in 2021. China doesn’t have stable or large domestic supplies of lithium and relies on imports from mines elsewhere, including in Africa, South America and now Canada.

Chile, Australia and Argentina together hold about 75 per cent of the world’s known lithium reserves, and China about nine per cent. Natural Resources Canada says this country holds about 2.5 per cent.

Prime Minister Justin Trudeau and other western allies have indicated a desire to cut China’s dominance in the critical minerals industry and develop a supply chain that is more reliable and less vulnerable to global political disputes.

There are several proposed projects for additional lithium mines, as well as plans to restart production at a Quebec mine that went bankrupt and was sold.

The James Bay project is the first Canadian project for Australia’s Allkem and is supposed to start producing lithium in 2024.

The project is supposed to create 280 jobs during the construction phase and about 160 on average once in operation.

Conditions for the approval include monitoring and reporting on environmental conditions such as soil conditions and tailings, as well as preparing and executing plans to mitigate impacts on local fish and other wildlife, such as woodland caribou.

The mine is expected to produce about 846,000 tonnes of carbon dioxide or its equivalent in other greenhouse gas emissions over its two-decade lifespan, including construction. Annually its emissions will max out at 48,000 tonnes, or about what is produced over one year by 10,000 passenger vehicles.
www.allkem.co