Additive Manufacturing Gets Close to the Bone - Design Engineering

Additive Manufacturing gets Close to the Bone

Renishaw Canada looks at how one Canadian family uses metal additive manufacturing to save their beloved Bernese mountain dog. 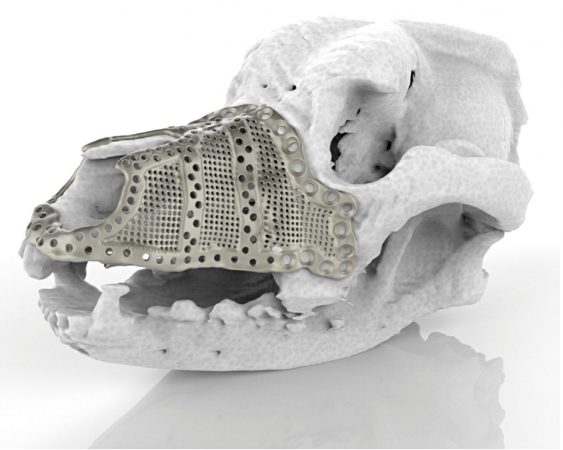 More than 50 per cent of dogs over ten years of age are likely to develop a tumour. Often, tumours can be shrunk with chemotherapy and removed with surgery without excessive long-lasting trauma. In some cases, however, the placement of the tumour is too difficult to operate on without severely impacting the quality of life for the dog.

In the human world there has been a significant shift towards surgeons using customized implants to help improve the results of surgery and reduce patient recovery times.

In the past, hospitals would only use patient specific implants (PSIs) for complex cases, but now – thanks to advances in technology – they are becoming part of standard practice. One of the most effective ways of producing a custom PSI is by using additive manufacturing (AM) with medical-specific CAD tools for the custom design.

That was certainly the case for one beloved Canadian pet. In a truly international effort, UK-based Renishaw banded together with 3D medical designers in Germany and additive manufacturing experts in Canada to help save an Ottawa family’s dog with the help of 3D printing.

The seven-year-old Bernese Mountain Dog had a tumour on the left side of his maxilla (upper jaw) and had few options other than total excision of the growth followed by reconstruction. A customised 3D printed titanium implant supporting the dog’s bone structure was the most appropriate treatment due to the complexity of the region, requiring significant design and manufacturing freedom. 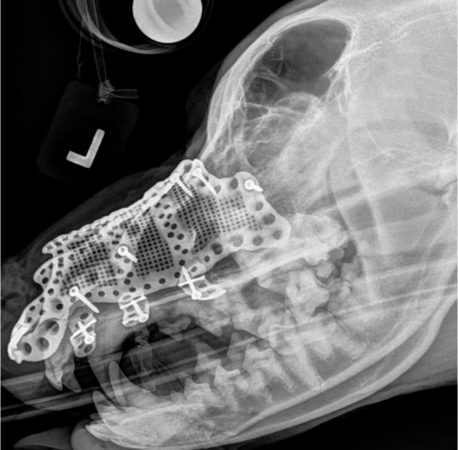 The procedure, which was carried out by Julius Liptak, veterinary surgeon at Alta Vista Animal Hospital in Ottawa, used an additively manufactured titanium maxillofacial implant designed by Voxelmed, based in Germany. Using Digital Imaging and Communications in Medicine (DICOM), a standard that enables the integration of medical imaging devices, a digital 3D model of the dog’s affected area was generated. The model was used to design a custom implant with input from Dr. Liptak.

During the design of the implant, Dr. Liptak reviewed the design repeatedly to compare it to 3D scans and models of the dog’s skull. This made the process of manufacturing and placement much more straightforward, as it met the surgeon’s specifications for how the implant would fit. Dr. Liptak was able to plan the procedure in advance, streamlining the process and reducing the time that the dog was under anesthetic.

The implant was manufactured at the Additive Design in Surgical Solutions (ADEISS) centre in London, Ontario. ADEISS is the result of a partnership between Western University, the London Medical Network and Renishaw. The centre will focus on the research, development and commercialization of additively manufactured medical devices and surgical instruments. It will also aid in the development of additively manufactured medical technology to address healthcare issues across the globe.

“During surgery, the affected areas, along with clean tumour margins, were removed,” explained Jan Klasen, veterinary surgeon, 3D designer and CEO of Voxelmed. “Because the tumour occurred in the skin, rather than the maxillary bone, resection involved a revision maxillectomy with excision of the 45mm by 50mm mass, with 30mm lateral margins. The implant was then put into place and fixed with surgical screws. A facial axial pattern skin flap was prepared and used to cover the affected area and the implant. This left the dog with a particularly impressive physical outcome as the nose structure did not have to be altered to account for the missing tissue.”

The design and manufacture of the implant took just two weeks to complete. In this particular case, the dog was suffering with on-going tumour growth. So, if the implant had taken too long to be produced, it would have no longer been fit for purpose, as the affected area would have grown.

During the design of the implant, Dr. Liptak reviewed the design repeatedly to compare it to 3D scans and models.

“Without additive manufacturing technology, it would have been almost impossible to reconstruct the dog’s maxilla after tumour removal, because the area was extremely complex in geometry,” Klasen commented. “The implant had to have a similar shape and functionality as the dog’s existing bone structure. Using additive manufacturing to maintain the original shape and function of the oral and nasal cavity ensures a high quality of life for the dog, just as a naturally shaped skull and maxilla helps the dog to breathe and eat easily.

“To my knowledge, this is the first implant of its kind,” Klasen added. “Prior to this case, the majority of veterinary surgeons were unaware that the technology was even available. Similar reconstructions are now being planned in Germany and there is on-going research into how animals can benefit from this procedure.”

The seven-year-old Bernese Mountain Dog was able to leave the hospital just one day after surgery. While he spent a little time taking pain medication and antibiotics he was able to breathe normally through his nose and has since made a full recovery. Without the advancements in additive manufacturing, this dog would not have such a long and happy future ahead of him.
www.renishaw.com

This article provided by Renishaw Canada.