An EV Goes Sea to Sea

Electrified VW Beetle travels coast to coast in 14 days with only minor snags. 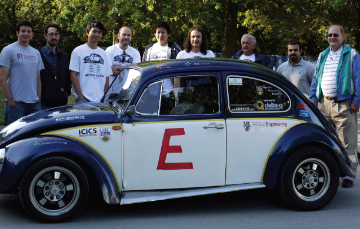 Many have driven across Canada with their families when young, visiting friends and relatives along the way. But only a very few have converted a 1972 VW Beetle to electric power and crossed the country with no back-up.

Ricky Gu, engineering student and president of the University of British Columbia Electric Car Club (UBCECC), along with other UBCECC members and faculty advisor John Meech – take that honour. The team was the first to traverse Canada in an electric vehicle – a VW Beetle the club members converted themselves over a span of 12 months on a shoe-string budget.

It took the team two weeks to travel the 6400+ km from Vancouver to Halifax. “We wanted to raise awareness of electric vehicle (EV) technologies and alternatives to fossil fuels,” says Gu.

“At our major charge-up stops, we had as much media coverage as possible and interacted with community members.”

But let’s get down to basics. First of all, why a Beetle? “We chose it because it was the car that brought affordable personal transportation to the masses, and it was the best-selling vehicle design ever produced,” says Gu. “It’s the perfect vehicle for us to send the message that practical EV technology is here.”

The team chose to install a three-phase AC induction motor for its reliability, efficiency and cost ($5000 was all they had for the entire drivetrain). “The AC induction motor is really reliable as there are no brushes,” says Gu. “It also works well for regenerative braking.” The install was simple, he asserts, basically mating the flywheel and clutch assembly to the output shaft of the motor via a rubber coupling that eliminated vibration and buffered out any misalignment.

Safety, however, was top of the criteria for the choice of battery. They went with a lithium iron phosphate (LiFePO4) unit, the only chemistry available in the lithium ion family that does not burn, explode or emit toxic fumes upon failure, Gu says. Fully charged in four hours, it powered the car a whopping 550 km. “The battery management system was the most challenging part of the whole project, as it’s pretty much the brain of an EV,” Gu says. “We also had to modify the suspension to withstand the extra weight of the battery.” The modified EV weighs in at 2800 lbs., which is about 100 pounds more than a 2007 Mini Cooper S.

There’s always room for improvement for any engineering project, and if Gu and his team would have had a bigger budget, he says they would have purchased things like better tires and a higher-voltage drive system to minimize copper loss.

The team set out with information on charging sites along the route, but Gu says it got a little harrowing when they discovered that some of these places didn’t always offer the services they advertise. There were other challenges, like the hilly terrain they encountered in northern Ontario following slow tractor trailers. In that case, they managed to travel 208 miles on a single charge at around 37 mph. Their average trip speed was 42 mph.

There were a few mechanical problems too. “In Alberta, we had a problem with the charger that was only running at half power because the vendor sold us the wrong connector,” says Gu. Just before entering the Quebec leg of the journey, the car threw a half-shaft but it was easily fixed with wrenches in about 15 minutes. At the end of the journey, the Beetle was placed snugly onto a train car and shipped home, while Gu and the rest of the team flew back to BC.

Although they’ve proved a cross-Canada journey in a modified EV is more than possible, the group isn’t done yet. They’re in the early stages of planning a much bigger trip called ‘Circuit the Continent Electrically’ in which they in an EV would visit 90 cities across North America in 90 days. “We’re also considering an entry in the next ‘Zero Race,’ which will probably be held in 2012,” says Gu.
www.ubcecc.com