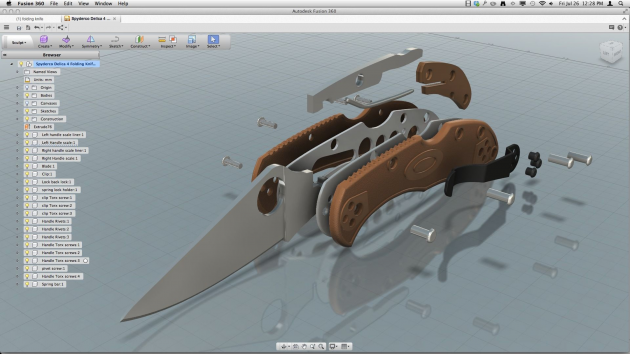 Last year, Autodesk began changing its entire business model to fit what it foresees as the future. At the end of January, the company eliminated sales of permanent licenses of standalone software and, in July, will do the same for suites.

Related to this, next March (or March 2018) may well be the last conventional big-R release for much of Autodesk’s software. A “big-R” is a major version of the software with a number (like 2017) that is packed with new functions. As Autodesk moves everything to the cloud, its software will run in Web browsers and so will be updated continuously.

Big-R’s haven’t come to an end yet, so let’s see what Autodesk has in this year’s release for AutoCAD and Inventor, as well as what’s recent in Fusion 360.
AutoCAD 2017

Autodesk is slowly integrating all its software. By slowly, I mean its been working for a decade or so to do things like get AutoCAD to read Inventor files – so that data from its various (incompatible) CAD packages can work with each other. AutoCAD 2017, for example, attaches 3D models from Navisworks and BIM 360 Glue, and then lets us use two objects snaps (endpoint and center) for drawing on top of imported entities.

The biggest new function in AutoCAD 2017 is its ability to import PDF files, instead of just displaying them as underlays. When a PDF files is imported, AutoCAD converts vector data into entities like lines and arcs. (See figure 1.) A nice touch is that all or a part of PDF underlays already in older drawings can also be converted to entities. Autodesk warns that PDF files are by nature not as accurate as AutoCAD drawings, and so we should expect some entities to not line up precisely. 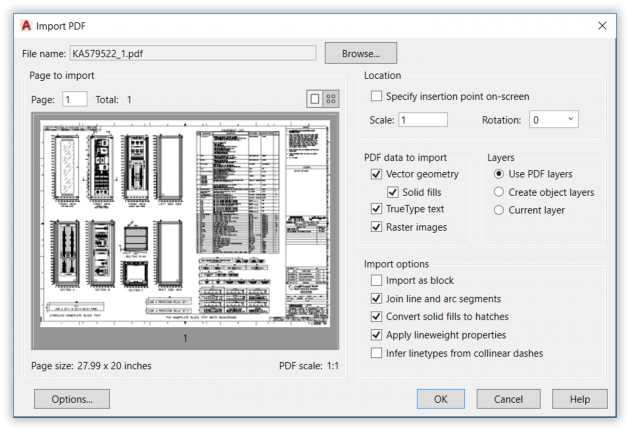 Figure 1: Options for deciding which PDF entities to convert to AutoCAD objects.

In addition, not everything is converted. For example, raster portions of the PDF are brought in as images, even if they look like vector. When text is placed in the PDF files with TrueType fonts, they are imported as text; but if the source fonts are not embedded, then characters might show up as rectangular placeholders. Oddly, Autodesk’s own SHX fonts are imported as lines and arcs.

The PDF import function is significant, because, I think it marks the end of DWF as Autodesk’s lightweight CAD format. AutoCAD was never able to import DWF files, even though some CAD programs from competitors could. Now that AutoCAD imports files from the formerly arch-rival PDF format, and because we no longer need to worry about file size on the Internet (as we did in 1998, which is why DWF was introduced), Autodesk has possibly eliminated the need for it.
AutoCAD 2016 improved dimensioning, but in 2017 centerlines and center marks are associative. When we move circles and other curves, the marks move with them; grips allow us to resize the marks and lines interactively. Make sure you use the new CenterMark and CenterLine commands, not the old DimCenter one.

Also, be sure to read up on the other ten commands and system variables that control associative marks.

Autodesk spent a couple of releases improving the way drawings look on the screen, such as smoothing the edges of curves and showing previews of editing changes. With AutoCAD 2017, objects look smooth even while we move them. Dots in linetypes look fatter when lineweights are turned on. When we use shaded or realistic visual style with 3D models, they are displayed faster. The enhancements depend, however, on whether the graphics board in your computer supports DirectX 11 and has at least 128MB RAM.

AutoCAD 2017 also offers a minor tweak that makes a big difference in usability: We can (finally!) resize some dialog boxes to make them larger or smaller. These include dialog boxes for editing attributes, managing layer states and inserting blocks. Here’s looking forward to all dialog boxes becoming resizeable. Other minor tweaks include specifying the layer on which hatches are placed automatically and adding the Multiple option to editing text.

As Inventor reaches the age of 17, Autodesk still code-names releases after sports cars. Inventor 2017 is “Enzo,” the 2002 Ferrari named after the car maker’s founder. Here are some of the things that are new and improved in this year’s release of the MCAD software:

Inventor 2017 adds 3D sketching, along with a tri-color triad that shows the position of the x, y, and z planes. To draw on a plane, we just need to click the associated triad. We can sketch on top of 3D geometry and objects can be constrained to planar and curved surfaces.

3D sketching comes in handy with flexible hose routing, and here Inventor 2017 reports more design violations. The diameter of more than one fitting can be changed with a single command.

Similarly, we can now extrude many parts after window-selecting them. When placing patterns (arrays), circular patterns can fix their orientation, and now path patterns can be placed (like path arrays in AutoCAD) along 3D paths.

Shape Generator gets more controls for creating models, such as setting a target for their mass, specifying the minimum thickness and symmetrical parts. Sheet metal design gets new types of corner relieves, and flat pattern updates can be deferred. Punches can be shown as center marks, sketches or the actual holes.

When it comes to referencing 3D models from other CAD systems, Inventor adds STEP and mesh data to its collection of supported formats, as well as doing a better job with CATIA, Solidworks, NX and Creo models. Reference parts can be opened directly. Inventor model can be exported as 3D PDF files.

Autodesk continues to add functions to Inventor, but I wonder for how much longer. For Autodesk, Fusion 360 represents the future of MCAD. To drive the point home, Inventor users with a subscription get to access Fusion 360 free.

Fusion 360 is, as Autodesk CEO Carl Bass insists, their cloud-based MCAD system, even though some 2GB of code runs locally on our computers. Being the future of Autodesk software, Fusion receives update continuously, i.e. every 6-8 weeks, instead of one big annual release as with Inventor. Still, I can report to you some of the functions added over the last half-year:

Autodesk has stated that its future consists of two stages: Moving all new licenses to subscription-only (accomplished), and then moving all software to the cloud – running on servers, such as those operated by Amazon.

Reworking bedrock programs like Autodesk, Inventor and Revit to run on remote servers (and displaying the results in a Web browser) is not, however, an easy job. The difficulty comes from the fact that Autodesk wrote its desktop programs (almost) exclusively with Microsoft’s programming tools. In turn, those tools were designed to lock software firms and their customers to Windows, as well as Intel-compatible CPUs. When software is written for the cloud instead, customers expect it to run on any operating system and any hardware; this requires a completely different approach to coding, and a huge rewrite of old code as a result.

Autodesk’s two-fold plan is risky. Competitors like Solidworks, Bricsys and Graebert say they are benefiting from customers unhappy with how Autodesk has unilaterally changed their relationship. Revenues of the second-largest CAD vendor are falling after it switched away from the big cash bump it normally gets from selling perpetual licenses, while regulators prevent them from recognizing upfront subscription income for more than one quarter at a time. For an industry that relies on accuracy and certainty, the current spate of uncertainty is unsettling.