Life is good for Autodesk. This year, the 38-year-old software firm will finally pull out of its US$2-2.5-billion-a-year doldrums and is guiding analysts to expect $3.25 billion in FY2020, up a remarkable 30% over previous years. Its share price is at an all-time high and is nearing $200. Its software collection boasts 140 products as it branches into non-traditional areas, such as 3D printing software for medical implants (Within Medical).

Then, this past August, the company shook up its most loyal customers by announcing time limits would be imposed for authorizing older software. The rollout of the new policy proved confusing, as sometimes the company specified “software older than three releases” and other times “versions 2011 and later can be activated until March 2021.”

The accompanying web pages offered extensive FAQs that did not lessen the confusion. It turns out, the restriction is less ominous than initially portrayed. It kicks in only when you want to reinstall old software, such as on a new computer. Still, it was one more brick in the wall Autodesk is building against perpetual licenses.

The one industry that Autodesk truly does dominate (i.e. computer games and special effects) is a relatively small slice of their business. Games are three times bigger than movies, and movies are going nearly 100% digital, yet the Media & Entertainment division represents just 7% of Autodesk’s revenues.

Here’s why: It’s not uncommon for a special effects firm to win a fixed-price contract for a big movie, like Gravity, but then go out of business due cost overruns once the contract is ended. These firms typically use Autodesk software.

Inventor Turns 20
Celebrating its 20th anniversary this year, Inventor continues to chug along, selling 40,000 copies a year, about half that of Solidworks. Like its arch-rival, Inventor is in a no-man’s land between being beloved by its user base but beset by an owner who’d rather users switch to a modern MCAD program like Fusion. Nevertheless, a few years ago, Autodesk pledged to keep updating Inventor for another five to ten years.

The surprise announcement during the company’s annual user event in Las Vegas was that browser-based Fusion 360 will work with ANSYS Mechanical FEA desktop software for structural analysis, despite Autodesk having spent lots acquiring its own stable of analysis software (e.g. Nastran). Then again, ANSYS is pretty much the go-to firm for analysis these days. 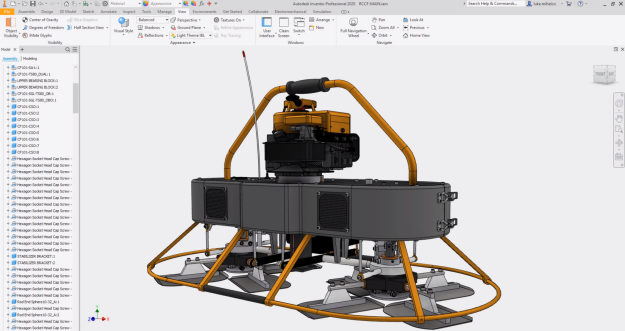 Generative design (a.k.a. material optimization) is still the in-thing, as no newer MCAD technology has come along to supplant it, marketing-wise. Fellow CAD journalist, Roopinder Tara, points out that generative design fails in many areas outside of its core task of material optimization. Its results tend to fail with buckling loads and cannot be manufactured with traditional CNC machines.

Even so, for a second year running, Autodesk showed off a VW microbus with a few of its parts redesigned with generative design. Autodesk had made it especially difficult for customers to access its version of generative design and so at AU2019, it announced that users could get a couple of months of access for free.

Revit at 20
Revit this year will celebrate the 20th anniversary of its launch as a venture-funded company, backed by some of the same people who funded Solidworks and later Onshape. After being acquired by Autodesk, it became essential software for architects – primarily in USA and Britain.

The idea behind parametrically modeled buildings with integrated information (BIM) is exciting. “Look! If I specify a new ceiling height, every floor in the entire skyscraper updates automatically.” That was revolutionary.

BIM began to lose its luster, however, as the amount of detail and data stored in a single model of an entire building began to overwhelm the hardware. As a result, it’s not well suited to collaborative design among remote offices. To cope, Autodesk introduced LODs (varying levels of detail) and while third-parties developed enhancements to optimize the shuttling of models between multiple offices.

Autodesk had promised a modern Web-based replacement code-named “Quantum,” but it appears to have been reduced in scope. That’s no surprise, given that Revit was designed to be irreplaceable due to its incomplete API that operates only inside the program and undocumented file formats.

Even so, outsiders are opening those formats up by banding together under the auspices of the Open Design Alliance to document the APIs and RVT/RFA file formats. As a result, competitors’ software can already read and display Revit models, while creating and writing models is promised for later this year. No one expects a Revit clone to materialize, but third parties are already peeling off functions that Revit does poorly, such as drawing documentation.

For its part, Autodesk props up Revit with 31 Web-based BIM 360 apps that manage projects, costs and so on. I consider BIM 360 a stopgap measure. One reason I mention Revit is that, last year, Autodesk concentrated all its acquisitions efforts (Assemble, BuildingConnected and PlanGrid) on construction, a market many times bigger than design. Being a much larger market means Autodesk also faces much larger competitors, most of whom are long-established. The near-billion it spent on acquisitions don’t guarantee it a win.

AutoCAD at 38
The CAD program whose name is synonymous with our industry is one of the oldest computer programs still in popular use today. It is a survivor, fending off attacks for 25 years from more than 30 AutoCAD workalike programs, some of them free.

It is popular with users, but not Autodesk executives. Despite costing CAD$2,100 (plus tax) a year, the company has pulled back on the development of AutoCAD. The annual feature list is barely a dozen and primarily enhances existing functions. Autodesk also faces the problem that significant enhancements to AutoCAD would step on the toes of its more expensive vertical software.

Released last year, the latest update to AutoCAD 2020 includes an update for the Blocks palette that features faster display of thumbnails and better usability.

Before subscriptions, software companies had to show users that upgrading was worthwhile. Now, in the rental economy, software companies need not lift a finger too high, as they have already pocketed the cash. And so, AutoCAD users receive enhancements like yet another palette for inserting blocks and improvements to comparing two similar looking drawings.

Mildly embarrassing for Autodesk is that its most popular program, AutoCAD LT, is also one of its weakest. It’s a stripped down version that does neither 3D nor programming; instead, its popularity stems from doing what most drafters do: 2D drawing, 2D editing and 2D printing.

Like Inventor and Revit, desktop-bound AutoCAD is a problem for Autodesk executives, who want to be serving up server-based software. A former CEO once stated that all of Autodesk’s software would be available only through the cloud by 2018. That didn’t happen, isn’t seen (by me) to ever happen, and he is no longer with the firm.

There is a cloud version of AutoCAD. Since 2010, it has undergone three technology transitions and three name changes, the most recent one lacks a surprising number of functions and DWG compatibility as compared with direct competitors, such as Graebert Kudo.

Depending on what you count as a CAD software firm, Autodesk is either in third or fifth place. It faces hard competition in all four of its sectors – mechanical, architectural, general CAD and entertainment. It suffered years of losses during the long switchover from permanent to subscription licensing.

Its current CEO has surmounted most of these challenges, but one remains. It is having a hard time nullifying its desktop software in favor of Web-based apps. But then this problem bedevils all CAD software companies who try to solve it and, in my opinion, is a problem that’s unsolvable.
www.autodesk.com