A lack of support

How to design unsupported vs. gliding cable carrier applications.

The cable carrier is an integral part of any machine design and should be considered early on in the design process. It can be implemented in a variety of ways, depending on the motion of the machine, but the most common is a horizontal, unsupported, short-travel installation. In this type of application, the upper run of the carrier operates without touching the lower run throughout the entire length of travel. 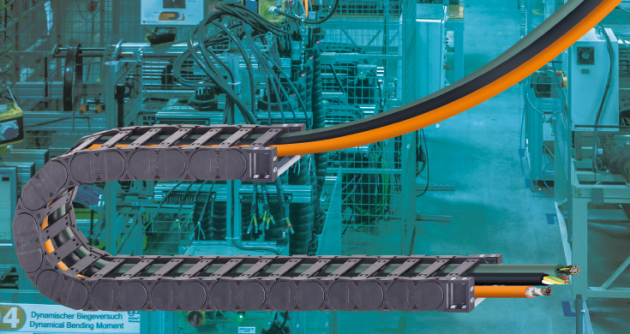 If the length of travel is too long for an unsupported installation, it is considered a gliding, long-travel application in which the cable carrier glides on itself. A guide trough and glide bar must be used to support the carrier.

This quick guide shows  how to implement cable carriers and critical rules to follow during the design and installation process.

If the upper run of an Energy Chain cable carrier operates without touching the lower run over the entire travel, it is classified as an unsupported application.

For long travels, the upper run of a cable carrier rests on the lower run, gliding partially on the lower run of the carrier, and partially at the same height on a glide bar. For lateral guidance in a gliding application, a guide trough is required.

Guide troughs allow for cable carriers to operate smoothly and securely in long-travel applications. The height of a guide trough must be at least twice the height of the carrier links, and the sides must provide a chamfered opening, with slightly wider inner width than the outer width of the carrier.

When the upper run cannot glide along the lower run, glide bars must be installed along the sides of the trough.

Important notes for installation of troughs and glide bars:

For unsupported and gliding applications, the acceleration of the cable carrier is a critical parameter to consider. High accelerations can cause the carrier to vibrate, reducing the service life. In an unsupported application, where sag is  greater than the FLG (unsupported, straight) value mentioned above, this can become particularly dangerous.

This article was provided by igus.