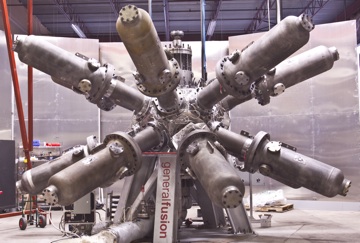 A successful test of this scaled down prototype of General Fusion’s reactor may change the future of energy production.

In a world beset by fossil fuel energy woes, fusion energy is holiest of Holy Grails. A working fusion reactor would not only release large amounts of energy but, unlike nuclear fission plants, they can’t melt down. They’re also significantly “cleaner,” in that a fusion reaction only uses small amounts of an abundant fuel (hydrogen isotopes tritium and deuterium), which is only weakly radioactive. The problem is, no one has yet created a net gain reactor (more energy out than in), although many well-funded programs are actively pursuing it.

It’s not surprising, considering the daunting challenges involved. Similar to the process that drives the Sun, a fusion reaction—melding two hydrogen atoms to form helium—requires heating the reactor fuel to galactic-scale temperatures and crushed under intense pressures. Of course, you also need a vessel capable of producing and containing these thermonuclear conditions.

Consequently, building fusion reactors will take decades, as well as enormous expenditures, which is why enthusiasm for this type of energy production has dampened. However, these same issues have many in the field keeping a close eye on a Canadian company, General Fusion, and its comparatively low-tech approach to fusion power. The Burnaby, BC-based company’s mechanical design sidesteps the massive costs of other leading approaches.

“Fusion reactions require plasma to be heated to near 150 million˚C, and that requires a lot of energy,” says Michael Delage, General Fusion’s vice president of business development. “Where you get this energy, and how you deliver it to the fuel, has a big effect on system cost.”

Reactor Design 101
To appreciate General Fusion’s concept, it’s important to understand how it differs from the two leading projects. ITER, a multinational collaboration based in France, is the larger and uses an approach called magnetic confinement. Using this method, a stream of super-heated tritium and deuterium gas, or plasma, is contained in a donut-shaped vacuum vessel called a tokamak. Super conducting magnets heat and compress the plasma to create the fusion reaction.

The National Ignition Facility (NIF) at Lawrence Livermore National Laboratories is pursuing the other approach, inertial confinement. It employs 192 laser beams focused on deuterium-tritium pellets inside a 10-meter-diameter target chamber to convert the fuel to plasma and generate X-rays. The radiation then compresses the plasma until fusion occurs. Both methods, says Delage, require massive amounts of input energy and depend on expensive, complex equipment that drive development costs into the billions and time lines out to 2050 at best.

In comparison, Delage says a commercial General Fusion reactor could be online by 2020 and at a fraction of the price. The company’s approach is a hybrid between the two main methods, called “magnetized target” fusion, and employs a comparatively less power hungry reactor design. Based on a concept called LINUS first developed by the U.S. Naval Research Laboratory in the 1970s, General Fusion’s reactor starts with a spherical vessel filled with liquid lead-lithium metal. The liquid metal is then pumped in a circle until centrifugal force forms a vortex in its center. Into this vortex, plasma injectors on the top and bottom of the reactor inject doughnut-shaped “puffs” of plasma wrapped in a magnetic field. Like smoke rings blown into either end of a tube, these “magnetized targets” collide at the reactor’s core. As the targets combine, approximately 200 steam-driven pistons simultaneously hammer the spherical vessel, sending a shockwave through the molten metal. The shockwave collapses the vortex and compresses the plasma, heating it adiabatically (like a diesel engine), to produce a short burst of fusion energy.

During the reaction, the hydrogen isotope atoms fuse into Helium and throw off high-energy neutrons that pass into the swirling liquid metals, transferring heat and converting some of the lithium into tritium. After the reaction ends, the metal is pumped out of the chamber and passed through a separator that removes the helium and tritium, which can be directed back to the plasma injectors as fuel. Meanwhile, the hot lead passes through a heat exchanger that creates steam, half of which will be used to re-power the pistons and the other half to generate electricity.

According to Delage, each fusion pulse will result in approximately 100 MJ of net electrical output. The cycle repetition rate can be varied to control the overall power plant output; if repeated once per second, the net output will be 100 MW. In addition, the reactor would use only small amounts of deuterium and lithium. If fusion reactors began generating enough electricity for the entire world, Delage says, lithium reserves would last for 207 million years and deuterium for more than 67 billion years. General Fusion’s reactor will employ 200 steam-powered pneumatic pistons, like this one, to create the necessary pressures to induce nuclear fusion.

Fusion for Less
For all its promise, the quest for net gain fusion has been a time consuming and costly endeavor. The ITER reactor is projected to take 10 years and 13 billion euros to construct. That doesn’t count the 25 years and counting since the project began and the millions poured in by contributors so far. Even when built, ITER’s super conducting magnets and other components would require 50 MW worth of input power to start and maintain the reaction. Similarly, costs for Laurence Livermore’s National Ignition Facility are estimated at upwards of $850 million and its reactor requires 500 trillion watts of laser light to kick-start fusion reactions.

Where General Fusion’s magnetized target method stands apart is in its relatively low-tech, low-cost mechanical means of compressing the plasma. “As an energy storage medium, compressed gas is orders of magnitude less expensive than capacitors,” Delage explains, “but it’s hard to release this energy quickly.” At the center of a liquid metal vortex, tritium and deuterium atoms fuse, releasing a short burst of energy.

That’s the problem that ultimately scuttled LINUS, the predecessor of the General Fusion reactor, in the 1970s. The LINUS concept proposed impacting the liquid metal directly, which resulted in a relatively slow vortex collapse of up to 40 milliseconds, while the magnetized target holds its structure for only about 100 microseconds. According to Delage, General Fusion has solved this problem by impacting the containment vessel itself.

“Our sphere is in fact full of holes, like a Wiffle ball,” he explains. “Each hole is plugged with an ‘anvil’ and compressed gas is used to accelerate a 100 kg ‘hammer’ piston. This acceleration takes about 80 milliseconds. When the hammer piston impacts on the anvil piston, it moves a small amount and transfers the energy into the liquid metal in about 80 microseconds. That’s a timescale shorter than the lifetime of the magnetized target and an increase in power of 1000 times.”

The challenge is that as the energy delivery speeds up, the requirements for symmetry of compression increases. “Every piston has to be individually servo-controlled to achieve the necessary synchronization,” Delage says. “Achieving this wasn’t possible in the 1970’s, but we are able to nurse each piston’s trajectory using a fast-response, closed-loop control system and brake, so that the timing of the impact is controlled to within microseconds. It’s the use of modern electronics—the computing power that has only come available in the last ten years—that makes our proposed system possible.”

Approaching the Finish Line
Presently, General Fusion is creating a prototype and key subsystems at full scale. These include a plasma injector that creates the magnetized target; individual full-scale pistons that meet requirements for impact energy and timing; and a 1-meter-diameter sphere with 14 pistons to demonstrate the symmetric collapse of a liquid metal vortex.

“We’re also performing a series of experiments to demonstrate the behavior of the plasma target at peak compression in accordance with theoretical predictions, and developing simulation tools, matched experimental data, to be used in the design of the prototype system,” says Delage. “To date, the most challenging work has been related to the formation of the magnetized target plasma.” The largest of its kind every constructed, this plasma injector is designed to inject “smoke rings” of magnetized tritium and deuterium plasma into the fusion reactor’s core.

He says General Fusion’s plasma injector is the largest such device ever constructed. Rather than a straightforward extension of smaller systems, many issues have been overcome to achieve the necessary performance.

“All our efforts have required significant innovation in mechanical design, materials, electrical and pulse power systems, diagnostics and advancements in plasma science,” says Delage. “It all takes time.” The company hopes to have a prototype operating by early 2015, and a working reactor by 2020.

“The path to a success is about understanding the physics and the engineering and managing the outcome to produce energy safely and reliably,” notes Dr. Paul Wilson, associate professor of nuclear engineering at the University of Wisconsin-Madison.

“The understanding of the physics of the mechanisms they are employing is less mature than with the two standard approaches, but they’re obviously learning more all the time,” Wilson adds. “Magnetized targets have been achieved in many experiments, but it’s a matter of determining how you can have atoms collide with enough symmetry that you get the bang and not a fizzle.”

Wilson believes it’s possible that a company like General Fusion may beat large national and international programs to the finish line. Dr. Kevin Bowcutt, a senior technical fellow and chief scientist of hypersonics at Boeing, agrees. He led an independent technical review of General Fusion’s technology in 2008.

“We found that their engineering challenges can be solved and they’ve been solving them since then,” Bowcutt says. “They have achieved things such as control of impact timing.”

He notes that General Fusion will be holding an important physics test this summer of their plasma compression device. If all goes well, it’s likely to change the global fusion mindset.

“The world has been saying that achieving fusion will cost billions of dollars and take decades,” says Bowcutt, “but General Fusion’s approach, if it’s shown to work, will sidestep all that.”

“I think a horse race metaphor works well,” Wilson observes. “We’re probably going to see one horse pull ahead and then maybe another catch up and maybe lead the group for a while, and so on. This will be an interesting decade.”
www.generalfusion.com