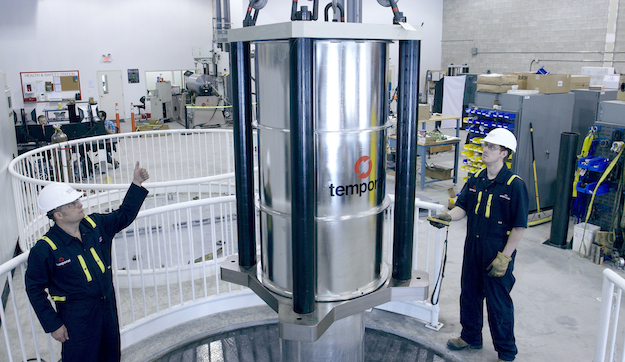 A 500 kW flywheel being lowered into the vault at Temporal Power’s manufacturing facility to undergo testing.

Sometimes what seems like bad luck can turn out to be a life-changing catalyst – the thing that sets us on a course we never could have imagined.

That’s been the extraordinary experience of Jeff Veltri. A non-work-related injury in young adulthood ended his five-year stint as a pipe fitter and sent him back to school, into Ryerson University’s mechanical engineering program. He was employed for a while and then started his own firm, working over the next ten years on industrial, biomedical and military projects.

“I’ve always been an inventor and a tinkerer, taking things apart to see how they worked,” Veltri says. “But I’ve always had the goal of being able to both create and manufacture a product.”

The realization of this goal started without Jeff realizing it – in 2008, when the government of Ontario was introducing time-of-use electricity rates. It prompted him to look at how power could be purchased during non-peak billing times and then used whenever it was needed in his home office-shop. In his research, he was drawn to the flywheel.

“Any conventional energy storage device, like a battery, degrades a little each time you charge it and discharge it, but a device that is purely mechanical like a flywheel is immune to that, if the design is proper,” Veltri explains. “A flywheel can also deliver 100% of its capacity.”

As Veltri mused about flywheel use for his own business, he realized it could be commercialized for grid use. “So, I designed a small prototype and took it to the OPA (Ontario Power Authority) to show it off.” The device had an analog power meter with a disc that spun one way when the machine was charging and the other way when it was discharging, which gave a good visual demonstration.

To move forward, the next step was obtaining an $300,000 OPA Technology Development Fund grant, but applying would involve business model expertise. “I hired Cam Carver, and he was very enthusiastic,” Veltri explains. “He suggested partnering and creating a new business, and we formed Temporal Power in 2010 [Veltri is President and CTO, and Carver is CEO]. The management of grids was changing and Cam realized the concept would be of great value to the IESO (Independent Electricity System Operator of Ontario) in terms of frequency regulation.”

The company did secure the OPA grant, which allowed the tech to be scaled up to bench size, a 1 kW model, and then to what they now offer commercially: a 50kWh, 250kW or 500kW module that can be arrayed to multi-MW scale. Along the way, Sustainable Development Technology Canada and Hydro One provided assistance, and Lockheed Martin verified the design. Carver and Veltri also secured an investment of $500,000 from MaRS Discovery District, and $6 million from a Toronto-based venture fund, allowing the company to move to a facility in Mississauga. They are now at 30,000-sq.-ft. with 24 full-time employees, including eight engineers.

“It’s been a period of great excitement mixed with some terror,” Veltri chuckles. “It’s great to have all the support and confidence of investors, and my very patient wife over the years, but the pressure is there. My hair went from brown to mostly grey trying to stay on budget, dealing with engineering challenges…but it’s been the time of my life.”

A simple flywheel design
In simplest terms, a flywheel is a mechanical battery that stores kinetic energy in a rotating mass. When charging, the motor uses power from the grid to accelerate the rotor to high speeds. Variable frequency drives feed the motor to convert electrical energy to rotational kinetic energy. On discharge, the flywheel slows and its inertial load drives the motor as a generator, adding power back to the grid.

Through their ability to efficiently balance energy and control energy frequency (at the standard 60 hz) by rapidly absorbing or generating power, Temporal Power flywheels improve power quality and lower costs. Veltri notes that problems with not being able to regulate grid voltage and frequency quickly helped cause the massive eastern North America power outage in 2003. 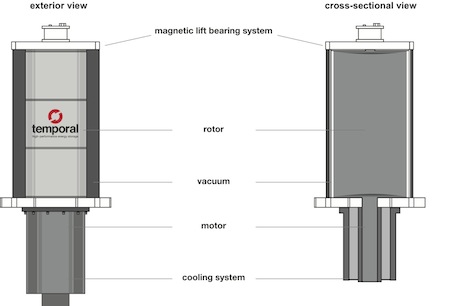 Temporal Power tech is also obviously very handy in integrating variable power generated from renewable sources like wind into the grid. The size and patented design of these flywheels allows them to hold massive amounts of energy many hundred times greater than conventional (relatively tiny) flywheels. The life cycle of the tech is 20 years with minimal maintenance and full recyclability, Veltri says.

The rotating mass is steel, weighing in at 4,000 kg with a top speed of 12,000 rpm. Veltri notes that while carbon fibre has been used in smaller flywheels, it is not feasible in this case as there are few companies who could make such a large rotor with it; carbon fibre is brittle and detecting flaws in it is difficult.

“Steel has been around for hundreds of years, and it’s a material that’s easily-obtained, relatively inexpensive and offers excellent defect testing,” he explains. “We have the machining done locally, and as much of everything else that we can within Canada as well.”

The flywheel spins in a vacuum to eliminate wind resistance, and the permanent magnet at the top forms a closed magnetic circuit that lifts the entire mass off the mechanical bearings, allowing them to do radial and axial positioning but under a very light load. The friction losses are therefore very low, less than 1 KW, and the bearings are expected to last a long time.

One of the two main engineering challenges was rotor dynamics. “At first glance, there is only one moving part, but with such a large mass spinning this fast, resonance was a big issue,” Veltri explains. “Any spinning object will resonate at certain speeds and directions depending on the geometry, and we used rotor analysis software to tell us theoretically how things should be shaped, but you still have to do prototypes. The models are excellent, but the characteristics change – things shake – because other things within the entire system come into play.”

Precision balancing of the rotor was the other main challenge. “We’d outsourced this but had to bring it in-house as no one had machinery that could do the job, balancing a 4,000 kg part within a few grams,” Veltri explains. “We had to customize the equipment to achieve the required tolerances, which are ISO G0.4 to G1.0.”

Temporal Power flywheels are being used, so far, by a company called NRStor in their contract with the IESO for frequency stability, and another proposal is in the works. They are also hard at work at a wind energy facility in Tillsonburg for Hydro One.

“There is a lot of talk about energy storage, storing it now to use later, but where energy storage has the most value in our eyes is in high-speed precision voltage and frequency regulation,” Veltri says. “This saves money, allows green energy to be integrated into the grid and can save island nations enormously in diesel fuel costs. We hope to have our technology used on islands in the near future.”
www.temporalpower.com