In traditional solid modeling, 3D geometry is assumed to represent parts made from a rigid material like metal or plastic. As a result, little if any consideration is paid to how the part may deform or warp during manufacture. Even with sheet metal design, turning 3D shapes into flat patterns need only consider the small material deformation introduced by forming stresses.

But what happens when a 3D design calls for a leather, cloth or a textile-like composite covering? Simply flattening the various panels that compose a car seat, for example, doesn’t account for the stretchiness of the material, the loads placed on the seams and a slew of other variables that can make the difference between a snug fit and a warped, wrinkled mess. Traditionally, such design has been a drawn-out manual process fraught with complication at not only initial design but also the manufacturing and project costing stages as well.

For more than a decade, Toronto-based CAD software company Tri-D Technologies has been developing ExactFlat, a 3D to 2D conversion module for SolidWorks and Rhino 3D specifically tailored for non-developable surfaces—those that require stretching, compressing or other deformations to be accurately flattened.

“Soft goods modeling is an orphaned CAD category,” says Eaton Donald, CEO of Tri-D Technologies. “If you look at what has happened with solid mechanical modeling, the integration of CAD design and CAM has driven efficiencies across the board. In the soft goods space, that isn’t the case. While the design is done in 3D, the material used to make them are typically rolled goods, so you have to somehow get from 3D to 2D. Until now, there hasn’t been technology that has accounted for the unique characteristics of industrial fabrics and textiles.” 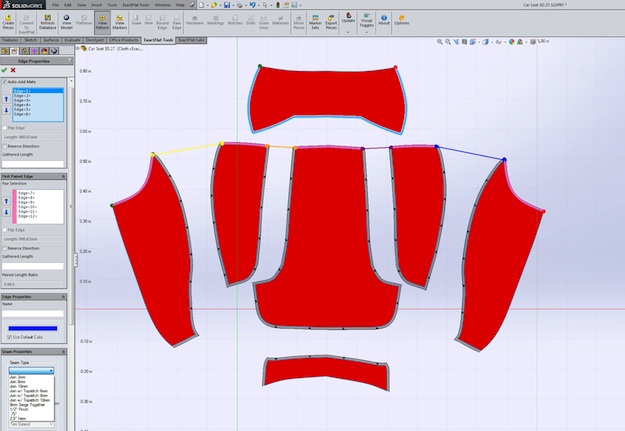 Once flattened, the 2D panels are optimized for fit and further refined to integrate details such as seam off-sets and alignment notches.

While flattening is core to its function, thinking of ExactFlat as simply a flattening plug-in is like calling a Swiss Army Knife just a handy pocket screwdriver. In fact, Donald says the module incorporates every major function needed for soft goods manufacturers to go from CAD to cutter in a purely digital workflow.

For example, ExactFlat maintains a database of various textiles and their engineering properties plus an internally developed FEA solver that simulates how those fabrics behave under load. The software then allows users to optimize 2D patterns so that the finished 3D textile covering will not only fit properly but bear up under stress.

“In the fabric world, unlike with sheet metal, distortion happens in both the x and y axis and you can form fabric in ways you can’t form metals,” Donald explains. “Our solver simulates the springiness of the material and how it will distort. Calculations like this are extremely difficult but, through theoretical and applied work, our solver performs at the high degree of confidence that customers need.”

Once pattern shapes have been optimized, ExactFlat then allows users to add features and PMI data, such as seam off-sets, alignment notches, reinforcement placement and grain-line directions. The next step involves nesting, the process of tightly packing the various 2D shapes to minimize material waste.

“Within the nesting component, you can project costs, which can be critical,” Donald says. “For example, during Black Friday in the U.S., Levi’s sells so many jeans that if their nesting is off by one inch, it costs them an extra quarter million dollars. So packing that nest down tightly is money to the bottom line.”

“We’ve done a great job with material and hardware costs,” he says. “The next wave will be nailing the labor component by attaching manufacturing operations like sew, flip and turn as well as machining such as double and single needle sewing, inserting grommets or zippers, etc. What we want to do is offer instant, accurate costing so that manufacturers will know, up front, whether a job will be profitable.”

Given Tri-D’s uniquely comprehensive software in a segment of the design industry largely untouched by traditional 3D MCAD to date, it’s not surprising that ExactFlat has gaining positive attention lately. In February, at SolidWorks World 2014, ExactFlat was awarded silver in TenLink’s Best of Show competition by a 15-man panel of CAD journalism’s heavyweights, including Brian McElyea, Ralph Grabowski and Roopinder Tara.

Closer to home, Tri-D Technologies also received a $500,000 small-business loan in July through the Southern Ontario Fund for Investment in Innovation to help the company scale up its sales and marketing campaign and further develop its software’s capabilities. Like many others in the CAD industry, Donald says ExactFlat next move will be to incorporate cloud technology to provide fast and precise manufacturing costs.

“Although our business is growing by four times each quarter, adoption of our product is low compared to the large CAD companies,” Donald says. “However, we have companies that have cut their design and turn-around times between 70 to 90 percent and material costs by 20 to 30 percent within months adopting our technology. The rest of the market will start to lose if they don’t adopt these type of practices, so we are very excited about it.”
www.exactflat.com