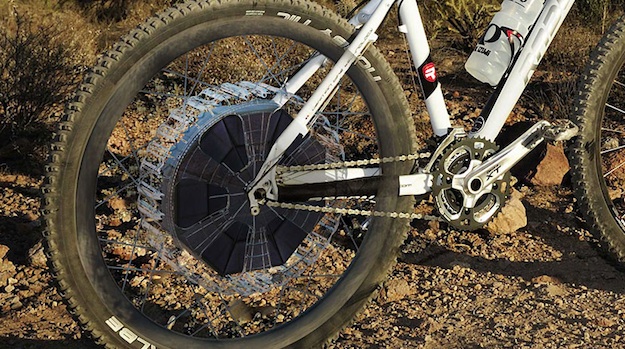 It’s the 21st century, so shouldn’t there be a ‘smart’ electric bicycle that recharges itself using solar energy, with operational displays and control available through a handy smartphone app? The answer is yes, and Canadian firm behind it is Toronto-based Daymak. The company is now putting the finishing touches on its new patent-pending ‘Daymak Drive System,’ an ebike self-charging system made up of wireless and wired controllers, rechargeable battery, solar panels and a wireless throttle.

“The DDS was created to answer questions that kept coming up, such as ‘How far can I go on a full charge?’” says Michael Chow, Daymak’s vice president of research and development. “We realized we needed a means to provide self-charging and storing capacity in our next generation of ebikes. The DDS enables driving 10 km a day without needing to charge the batteries using an external power source.”

The DDS’s self-charging capabilities build on this wireless capacity, integrating four systems that communicate with one another: The motorized wheel, the throttle assembly, the pedal assist system (PAS) and the smart key. The PAS increases output power in the 250W motor if the rider begins to pedal, and the smart key is a remote control for the motorized wheel assembly, which can be installed as part of the rear wheel for any standard bicycle frame supporting a 26-inch tire.

“The throttle assembly is mounted on the handlebars, enabling the rider to easily engage the motor by simply rotating it forward,” Chow explains. “The PAS high/low speed switch and on/off switch use the same wireless process, relaying information from the transmitter inside the throttle housing to the receiver inside the wheel housing, onto the controller, and finally to the motor.”

In terms of design challenges, Chow and his team needed to develop a shock absorber system that reduced vibration and also adequately distributed the weight of the batteries and motor onto the axle and outer casing.

“We ended up creating an octagon-shaped frame for the batteries, and attached leaf springs to the shock absorber system attached to this frame,” he notes. “There’s an outer ring and an inner ring to the shock absorbers, and we thought motor/axle vibration could be reduced by using concave flex in the outer ring and convex flex in the inner one. However, placing the leaf springs between the rings to do this didn’t provide the uniform, concentric compression in a limited space that was needed.”

Coil springs worked, but the outer ring diameter had to be expanded in order to almost double the clearance between the inner and outer rings. “The weight of the entire shock absorber system and battery pack meant that the support length of the axle needed to be almost doubled to provide bearing support,” Chow says. “And we had to make the axle solid instead of hollow. This revised setup provides a good cradle for the motor, but it’s a bit heavy, so our research continues.”

Space was also a primary design concern, with the PAS, motor, batteries, solar panels, battery management system board and controller all needing to be contained within the wheel. Over time, Chow and his team developed a cylindrical battery pack that wrapped nicely around the motor housing. They also developed foldable solar cells that covered the front and rear sides of the motor housing. Everything needed to be integrated within outer housing that let light through.

“It had to be transparent enough to allow most of the sunlight spectra in, but also be tough enough that the physical impact of stones and so on that fly up from the road would not affect solar charging performance,” Chow explains. “We tried plexiglass, which is light but wasn’t tough enough. Polycarbonate composite plastic needed a hard coating that scratched easily as well, so we’re now using tempered glass. It’s very tough and provides 88% of light transmission.”

Ongoing work on the DDS involves looking at lighter materials and next-generation battery packs that will further extend driving range. “We’ll also be using the latest solar panel technology as it develops and is available on the market,” Chow says. “The efficiency of solar cells today is not fully maximized.”

The DDS system will be available on the market in early 2015. Daymak has already received numerous accolades for its ebikes and their associated technology. The Ministry of Economic Development and Innovation has recognized it as one of the province’s ‘Greenest Companies,’ and it’s also received the ‘Cleantech North Award.’ Its wares have also received awards such as ‘Most Innovative Product’ at the International CES electronics and technology tradeshow.

“We already have a name for ourselves, and we hope the DDS system will achieve widespread market acceptance,” Chow says. “Having an ebike that uses the sun to recharge is an idea whose time has come.”
www.daymak.com