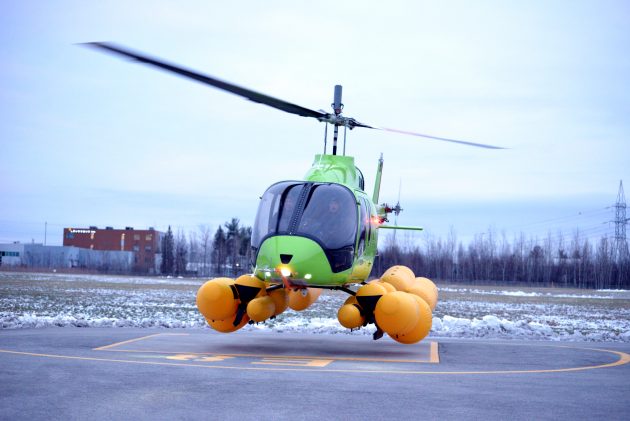 In 2009, however, the subsidiary of U.S.-based aerospace, defence and security firm, Textron Inc., opted to take the popular 206 essentially out of production. But, just three years after the last 206B-3 rolled out of its Mirabel, Quebec plant, Bell looked to repeat its success with the 505 Jet Ranger X. This time around, its aircraft would be up against competitors who took advantage of the 206’s exit. To reestablish its market dominance, the company knew it would have to quickly modernize the virtues of its legendary helicopter in record time.

Borrowing only a few elements from the 206L, Bell bills the 505 as a “clean sheet” design. Featuring a Safran Arrius 2R engine and Garmin G1000H avionics, this five-seat, two-blade, short light single (SLS) helicopter is one of the most technologically advanced commercial helicopters on the market. Like its predecessor, Bell wanted the 505 to maintain the 206’s reputation as light, safe and inexpensive to operate. To do that, Bell would have to control accessory costs, one of a helicopter’s most pricey operating expenses.

For the 505’s emergency float system (EFS) – which helps a helicopter stay afloat during an emergency water landing – Bell tapped Hawkesbury, Ontario-based DART Aerospace, to design the EFS on an aggressive schedule to meet early-2018 deliveries.

“The cool part was that, since [the 505] was a “clean sheet” design, there was the opportunity to work collaboratively with Bell to install the float system,” explains Pablo Bravo, Director of Engineering for the San Diego Facility at DART Aerospace. “Going into the kick-off meeting, we had already done a lot of work on the flotation design and systems integration with data we had been given from Bell. We tried to do our best to frontload the project with resources to make sure that, if there were any risks down the line, we would have enough time to react.”

Initially, DART pursued a simple and conventional cylindrical design for the float system. However, as the design process progressed, the firm’s engineering team found that the float needed to adapt to account for the helicopter’s envelope size, centre of gravity, maximum gross weight and geometry, all while meeting strict performance parameters.

The typical design of this accessory includes several cylindrical floats affixed to the forward and mid-section of a helicopter’s existing skidtubes. The floats are inflated by pulling the inflation lever, which pumps compressed helium through hoses routed to each float. With a single cylindrical float system, however, the centre of buoyancy is right in the middle of the float, making it fairly static.

Instead, the DART team looked to their patented Tri-Bag Float system. In place of a single cylindrical float, this system uses three inflatable cylindrical “bags” stacked together to act as one. The float located furthest outboard is larger relative to the inner float, which shifts the centre of buoyancy outboard and helps stabilize the helicopter. The advantage to this system, Bravo says, is that it can be adjusted to shift the centre of buoyancy in relation to a helicopter’s high centre of gravity.

“This was due to issues we had with the geometry of the skidtubes and crosstubes in the forward section where the kit was being mounted,” says Jason Gardiner, senior engineer at DART Aerospace. “There was a lot of deflection, so much so that it blocked the forward door from being opened. By expanding the tube a little bit, and having the float woven on the inboard side of the skidtube, we were able to manage the deflection a lot better than with the conventional cylindrical float. The pilot and co-pilot doors were then able to open without interfering with the Tri-Bag floats.”

With the float design established, the team focused on ensuring the kit could be installed and would operate efficiently. Bravo explains that the 505’s landing gear presented a significant challenge to design around – Bell designed the skidtube with a unique configuration that DART’s engineers were required to work around.

“Typically, when you are hanging something off of a skid tube that’s round it’s pretty easy,” Bravo says. “You just go right through the middle of the tube and everything is able to be oriented straight up. With the [Bell configuration], we really needed to be creative as to how we adapted to it.”

“Another challenge we had, in relation to the skid tube, was having to deal with the fact that the goal of this aircraft was to [be a lightweight option on the market],” explains Gardiner. Early on, the team determined their initial approach to mounting the skid extensions wouldn’t be strong enough to handle the loads on the aft float.

“There is a pretty significant reinforcement adapter piece that gets slid into the skids on the aircraft,” Gardiner says. “That was a unique challenge to this aircraft and it was quite a bit different than what we’ve done on other aircraft.”

Gardiner explains that the design underwent several rapid iterations. Once an issue with any aspect of the float design was identified, the team was able to turn around the new design in a matter of weeks. Within six weeks from that, they were running full scale tests with the new design. 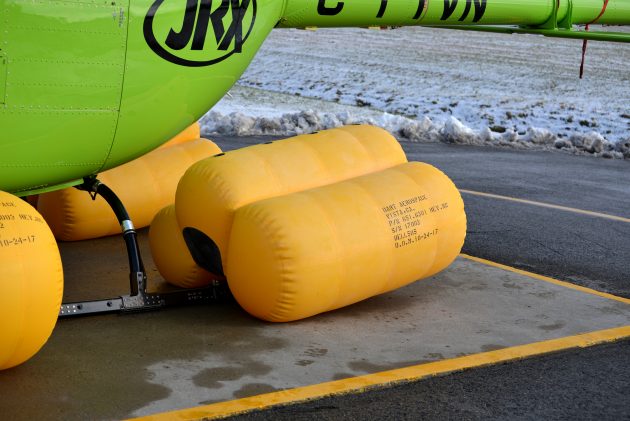 In an emergency water landing, an EFS like DART Aerospace’s Tri-Bag System and accompanying raft, keeps the otherwise sinkable aircraft above water so pilot and passangers can escape.

In fact, the EFS project’s greatest success, DART says, may have been the ambitious timeline to certification. The partnership was initially announced at the Heli-Expo in March 2017 with the expectation that certification would occur by the first quarter of 2018. Bell and DART Aerospace successfully secured STC approval from Transport Canada for the 505 EFS, within the original project schedule.

“DART’s on-time delivery for this project was impressive,” says LaShan Bonaparte, 505 Jet Ranger X Program Manager at Bell Helicopter Textron. “There was great teamwork between both teams to get this kit delivered in a timely fashion allowing Bell to meet its customer commitments.”

“I’m pleasantly surprised,” Bravo says,  “at how easily and quickly we were able to adapt to some of the design challenges on both the DART and Bell side to get this project up and running.”