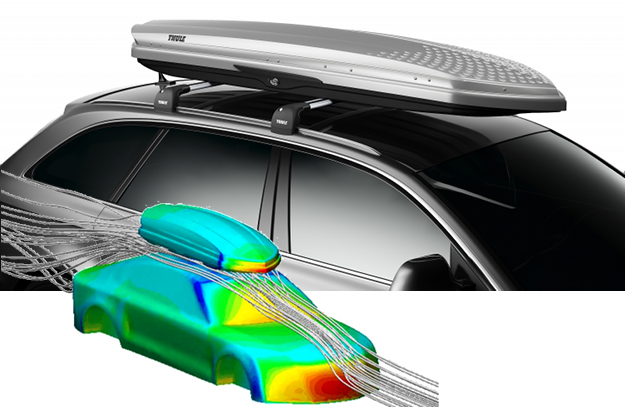 For more than 60 years, Thule Group AB has been making cargo carriers and other transportation equipment for the automotive accessories market. Over that time, the Swedish company’s products have become an instantly recognizable rooftop fixture for anyone who has transported bikes, sporting equipment or the family’s luggage during an extended cross-country vacation.

Obviously, carrying capacity is a central design target for its products, but other considerations, such as aesthetics, noise and aerodynamics, have become increasingly important. Due to their placement, cargo carriers can impact car handling and fuel economy.

As a result, when Thule decided to push the top end of the cargo box market with its new “Sonic” line, the company needed a compelling justification for what would become the most expensive model on the market. It decided to streamline the cargo carrier’s aerodynamics through CFD analysis and thereby derive a quantifiable advantage for the high-end accessory.

Possessed with more than half a century of product development and approximately CAD$980 million in revenues last year, Thule had the personnel and financial resources to perform the work itself. However, it turned to CFD consultants at Autodesk reseller IMAGINiT Technologies instead. The result was a design that reduced the container’s drag coefficient by 35 percent and ultimately lead to the company’s trademark Thule AeroNose.

“Ours is a very collaborative model,” says Jason Pfeiffer, director of CFD analysis at IMAGINiT Technologies. “A lot of people think, ‘you’re a consultant, so go off in a black hole and come back when you’ve solved my problem.’ We are strongly against that. I tell people that we can definitely fix your problem but we may come back with a design that is cost prohibitive, difficult to manufacture or not aesthetically what the market is looking for. So, it’s really important that we combine our core competencies so that all the recommendations we give fit within the product’s constraints.”

In Thule’s case, Pfeiffer says his team was brought in early to the design process but the relationship wasn’t love at first sight. The Swedish company had worked with analysis software internally and other CFD consultants in the past with less than productive results. As with many clients, Pfeiffer says the initial challenge was convincing Thule how valuable a consultant like IMAGINiT could be.

“There is no shortage of software tools and consultants,” he says. “A big part of what we have to do is continue to build credibility in our own expertise because of perceptions that have been created by others. Some of those perceptions were created by consultants who said they were the greatest thing since sliced bread but then really fell short. For others, they have bought into the idea that the software can be driven by anyone but then eventually it becomes shelf-ware. So what we do is show that this really is what we do for a living and, if it is the right application fit, then we are the right consultant for them.”

The Value of Expertise
Finding that right fit is critical, agrees Creaform’s FEA/CFD manager, Pier-Olivier Duval. Best known for it’s handheld 3D scanners, the Québec City-based firm has also offered engineering services since its founding in 2002, including a dedicated team of analysis experts.

According to Duval, although simplified FEA and CFD modules bundled with popular CAD software can provide workable answers in the early design stage, in-depth analysis requires an expert who knows how to pose the right questions.

“When it comes time to make complex analysis like dynamics, CFD, vibration or fatigue analysis, you need someone who has a better understanding of how the physics work,” he says. “If you aren’t aware of the tools you are using to apply loads, boundary conditions and these kinds of things, you aren’t correctly fixing your part in the space and this will generate bad results.”

In addition, he says it’s important to choose the right tool for the job. In truth, FEA and CFD software isn’t a commodity. Each application has strengths in particular applications, but relative weaknesses when applied to others.

“We don’t rely on only one software package; we use many in fact,” he says. “A particular application may be able to perform very complex simulations in one instance, but it may not be the best for all kinds of design. So, we may choose LS-DYNA, ANSYS, Nastran or something else because it is the best suited to solve a client’s problem.”

“We get involved with a lot of companies who discover after-the-fact issues with their products,” he says. “Those are huge expenses. These days, you often don’t get a second chance. If you put something out to market that doesn’t work properly, people will just go to your competitors. So it’s often the cost of not doing the analysis that people don’t recognize.”

On the upside, McKim says engineering analysis can uncover positive product qualities a manufacturer may not be aware of initially. As an example, he says SimuTech was recently contracted to test a Toyota Prius body kit (spoiler, fender flairs, etc.) for an Ontario-based automotive after-market manufacturer. After a CFD analysis, the kit —which was initially intended for aesthetic purposes—was actually found to improve the aerodynamics of the already fuel-efficient vehicle.

“You can gain so much more of an understanding of your product on a computer than you can from a physical test,” he says. “With a computer, you can see everything, all at once, and do it a lot quicker than anything that can be done physically.”
Ultimately, he says engineering analysis pays its biggest dividends when it’s used not only to validate a finished model but also leads engineers to an optimized solution.

“Because simulations are so much easier to do and computers are so much more powerful, we can set up a full parametric study, run a few hundred simulations and come back with a full statistical sensitivity study,” he says. “This way, you’re not doing a one-off analysis of an ideal part you’re never going to manufacturer. Instead, you’ll get an understanding of the factors that really impact the performance of your design and use that to focus on how you want to do your manufacturing and get your costs down.”
www.imaginit.com
www.simutechgroup.ca
www.creaform3d.com