When Dassault Systemes held its annual SolidWorks World convention last January, it announced that a new SolidWorks Mechanical Conceptual package would finally ship in April. In essence, the name describes what it does: Modeling of conceptual designs of things that move, like machinery and mechanisms, in 2D and 3D.

In the mid-1990s, when it was first released, SolidWorks was revolutionary and today remains the most popular MCAD system. But it is aging, and so Dassault spent seven years figuring out how to modernize it. SolidWorks Mechanical Conceptual (SWMC) is the result. The biggest changes from SolidWorks are that this new software allows direct modeling and editing, and that part files do not reside on your computer.

The idea behind SWMC is that you use it to rapidly and collaboratively iterate a working design, then bring the design into SolidWorks for detailing and documentation. As one user admiringly described the new software, “I like the 2D motion study stuff I’ve seen so far, which seems like it’s much better than the approach you have to take with legacy-code SolidWorks. I like the heads-up user interface, and the non-reliance on a Windows user interface.”

These changes came about two years ago when Dassault decided on a new course and a new look for all its software (about 240 packages in all); SolidWorks Conceptual software follows the same path as the others. In a press release about SWMC, Dassault emphasized its new vision: “In the Age of Experience, the world of design has changed: It is more social, more conceptual, and collaboration is critical.”

This vision is quite different from how engineers are used to working; nevertheless, SWMC presents a modeling environment based on Dassault’s aim for its software having social, conceptual, connected and instinctive elements.

Social: All designers on a project are connected to each other through a live chat window. Comments are posted to private communities; you, other users, and your clients can provide feedback on the design through Dassault’s SwYm (See What You Mean) forum system running in a supported Web browser, without need for an SWMC license. 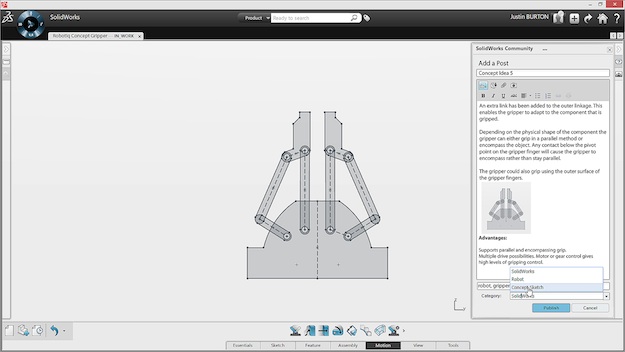 Conceptual: SWMC is arranged to let you develop many designs rapidly through the use of direct modeling; you are not forced to define parameters or add constraints, as you do in SolidWorks. Parameters and such can be added later.

Connected: SWMC is connected to the Enovia V6 database, which is housed on the cloud, either on- or off-premise. On-premise hosting is promised for a future release; initially, Dassault will host your data on its own servers. Design iterations of each concept are saved automatically, and changes are updated to all connected users. This method of saving changes means the design is backed up automatically.

Instinctive: SWMC’s “Single Modeling Environment” handles the entire design process, from layout sketches to 3D geometry (parts and assemblies) through the use of history, parametrics and direct editing. SWMC lets you directly edit parts (SolidWorks can’t do this), yet maintains design intent like a history-based model. Once the model is sufficiently developed, you can run motion simulation to ensure the assembly works correctly and that parts don’t crash into one another.

Concerns About SWMC
Dassault is in a bind. It wants to keep its massive, two-million SolidWorks customer base happy, yet it also wants to transition them its incompatible 3Dexperience platform. In several areas, the result will be a disconnect for SolidWorks users:

Incompatible: Despite the name, SolidWorks Mechanical Conceptual does not work with SolidWorks. You cannot take a motion-optimized, parameterized model that you carefully constructed in SWMC and then pop it into SolidWorks to quickly complete the design. Instead, SWMC exports only dumb geometry to SolidWorks through 3DXML, Dassault’s lightweight exchange format that’s similar to JT from Siemens and DWF from Autodesk. The loss of design intelligence means you have to laboriously set up the model’s parameters a second time in SolidWorks. Dassault won’t have a direct SolidWorks translator ready for SWMC’s launch, and when the translator does ship, it is expected to cost extra.

There are reasons why SWMC is as incompatible with SolidWorks as it is with Pro/E or NX. One reason is that it uses Dassault’s Enovia database for storing models, which is not like a traditional file format. Instead, Enovia stores design data as fields and records in a massive database, kind of in the way that Visio stores graphical elements in spreadsheet-like files. Whether it’s V6 or Visio, the result is that translators are very difficult to write.

The other reason is that the two programs use different modeling kernels. SolidWorks has always licensed Parasolid from Siemens PLM (and will continue to do so in the future), while SWMC employs Dassault’s own CGM (convergence geometric modeler), on which CATIA is based.

Costly: SWMC is going to be expensive, no question about it. It is priced at $2,988 per user, per year, and is priced even higher outside the U.S. In comparison, the base version of SolidWorks is $3,995, and you pay that once. Now, Dassault has been advertising the SWMC price as “just $249 per month” but this is misleading, because you cannot pay for just one month; you pay for 12 and then pay again the following year. In addition, the license is tied to a named user, so no floating licenses in your office.

At this early stage, it is not clear if free 30-day trials will be available. Dassault has not mentioned them, but the speculation is there will be none because SWMC uses Dassault’s servers to process data, which is a cost to them.

Unfamiliar: The user interface of SWMC is different from SolidWorks, even though Dassault claims in its press release that it has a “SolidWorks-familiar, easy-to-use interface.” However, Figures 1 and 2 show that, to the contrary, SWMC follows the new UI guidelines that Dassault is applying to all its V6 software.

SMWC is not the first attempt by Dassault to befriend SolidWorks users through Envoia V6. The original was n!fuze (aka SolidWorks Product Data Sharing, aka SolidWorks Connect), but it quickly bombed when users couldn’t figure out why they should pay just to share files and comments with other.

The Competitors’ Approach
Dassault’s primary competitors are approaching the problem of modernizing their aging MCAD systems in ways that are similar and different.

Autodesk’s strategy is most similar to Dassault’s. It’s leaving the older Inventor in place, along with its many add-ons. The modern replacement, Fusion, began as a direct modeling complement to AutoCAD and Inventor. Then, last year, Autodesk repurposed Fusion as “cloud-assisted” MCAD software.

Like SWMC, Fusion has its own file format, and so must translate drawings to AutoCAD and Inventor. Autodesk aims to run all its software on the cloud, as identified by the 360 suffix.

PTC invented the original parametric MCAD program, Pro/Engineer, and then a few years ago rewrote it as a new MCAD platform under the name of Creo. Once users purchase the base version of Creo, they can add compatible add-ons, such as for direct modeling or FEA. When it comes to exchanging drawings, there is no loss of data, because Creo and all modules employ a universal file format. In contrast to Dassault and Autodesk, PTC has shown little interest in putting CAD on the cloud.

Siemens PLM Software is keeping its two MCAD programs, NX and Solid Edge, as they are. But, a number of years ago, the company integrated direct modeling into them under the name of Synchronous Technology. Because SynchTech is integrated into the CAD software, there are no data translation problems. Siemens has stated it will not put CAD on the cloud.

So, it appears that the MCAD vendors are splitting into two disparate camps. One is writing new, incompatible software while betting on the future of the cloud; the other camp is maintaining a single file format, and is barely interested in the cloud.

Dassault is firmly in the first camp, and SWMC is only the first of a series of vertical programs to compliment SolidWorks. Next in the series is SolidWorks Industrial Conceptual for conceptual industrial design, such as the outsides of toasters and snowmobiles. It will use the excellent surfacing capabilities of CATIA and is expected to enter post-beta customer testing (the “Lighthouse” program) this summer.

Engineers are, by nature, conservative, due to the awesome responsibility they carry in their design work. Back when I was an engineer, I would explain to friends that “when a doctor screws up, he can only kill one patient at a time; when we engineers make mistakes, we can kill hundreds simultaneously.” And so we don’t accept anything new just because of its promises; new technology has to prove it is safe through accurate analyses, data integrity and longevity, and correctly-made drawings.

The experience with n!fuze is not good news for Dassault and its hope of weaning SolidWorks users off SolidWorks. Combined with the correctly cautious nature of engineers, it will be interesting to watch whether the all-new SMWC is able to gain traction.
www.solidworks.com

Ralph Grabowski is a CAD journalist and the author of 140 books on computer-aided design. Check out his blog at worldcadaccess.typepad.com