A Canadian human-powered helicopter moves ever upward in the quest to take home the coveted Sikorsky Prize. 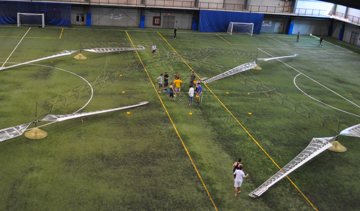 Taking flight using only human muscle power took an exciting step forward this summer, with several strong attempts to win the Igor I. Sikorsky Human-Powered Helicopter Competition. Unclaimed since its inception in 1980, the Sikorsky Prize requires a human to hover three meters off the ground for at least a minute within a ten square-metre area. It’s also the third largest monetary prize ($250,000) in aviation history. To date, there have been over 30 serious attempts to win it, but only three teams have achieved brief periods of flight, so far.

The Canadian contender is called the Atlas, which features four independent rotors connected by a large truss structure. At its centre, Dr. Todd Reichert—Atlas project manager, pilot and national level speed skater—provides the power atop a specially designed bike frame designed by Toronto’s Cervéllo. Like the bike, carbon fibre is a key component, used in the drive train, the truss and the main spars of the rotors. The rotor ribs of the Atlas are polystyrene-balsa wood with a mylar skin. The controls are on the handlebars of the bike, with collective and pitch actuated through end-shifters, and the vehicle’s roll adjusted with the brake levers.

The team behind the Atlas is known as ‘AeroVelo,’ a group of students and professionals supported by donations from individuals, research grants and corporate sponsors. Core members, such as aerospace engineer Cameron Robertson, have been working together since 2006 on the world record-setting Snowbird Human-Powered Ornithopter (flapping wing aircraft) as well as several high-speed bicycle designs. Fellow team member, Dr. James Delaurier, is the man who spearheaded the successful Canadian motorized ornithopter flights a few years ago.

Design
The Atlas uses four rotors, a design that requires low amounts of muscle power, strong stability and greater ease of construction in comparison to other models. Optimal structure design specifics were hammered out by Robertson using custom finite element analysis (FEM) code with 12 degrees of freedom (written by undergraduate engineering team member Trefor Evans). This program determined the forces on every part of the structure under a given loading condition.

“Then, from the internal forces that are calculated from the displacements given by the FEM, you conduct a failure analysis,” Robertson says. “That includes failure of wires, buckling and several modes of material failure of each layer of carbon in every tube.” The final configuration was designed to satisfy a total of 2615 failure modes.

The Atlas also needed a truss structure, which would reduce the overall weight through allowing the material failure of the structure to be closer to the buckling failure of the long unsupported beams. “Carbon fibre tubes are very thin, and most of our tube designs are large-diameter and therefore prone to buckling,” explains Robertson. “Using smaller tubes was the answer to prevent the walls from buckling before the carbon fibre fails in compression.”

Given a set of roughly 30 design variables, including rotor geometry, lift coefficient, spar diameter and tube thickness, the program then computed the total mass of the proposed aircraft design, the required flight power and the stresses in all the various components. Reichert then employed a computational optimizer to determine the design that would minimize the required power—the lightest possible structure which passed all of the failure tests.

This optimizer turned out to have a lot of trouble analyzing all the discontinuities (the non-realistic design solutions) that popped up, and Reichert eventually used a gradient-based optimizer. “It provided the robustness and speed to get the job done, converging every time and working about 100 times faster,” he says. “The downside was that I had to optimize the discontinuous variables by hand.” After many design tweaks and 240 optimizations, a solution was arrived upon—a final structure with a weight below the team’s estimate at the start of the project.

Controls
The controls for the Atlas are fundamentally different than the controls of a regular helicopter. “In our design, there are canards at the tips of the rotors that use the aero-elastic twist of the rotor to increase and decrease lift on the entire blade, more at the tip than at the root,” Robertson notes. “So, the challenge was to find a method of actuating the rotors that didn’t require too much additional force from the pilot, or too much weight in the mechanism. It was all novel and never seen before for a helicopter like this.”

Robertson says the next greatest difficulty was balancing the required control authority with structural flexing. “When you change the control surface orientation to change the lift of the rotor, the entire rotor flexes up or down with the change in lift,” he notes. “Sometimes this flexing is substantial, meaning that the tips of the rotors collide with the ground or bracing wires throughout the structure, which is a serious risk.”

Another thorny challenge was deciding how large to make the entire helicopter. “Bigger is better, but of course, the larger the structure, the more inconvenient and difficult to deal with,” says Robertson. “The rotor spool was also a big challenge. It’s a very large and lightweight structure that involved many iterations.”

One thing that wasn’t a problem was creating a well-prepared and experienced team. “Members were recruited from the University of Toronto Human-Powered Vehicles Team,” says Robertson. “These students were familiar with composite materials and advanced computational design techniques, which they use each year to make streamlined bikes capable of 120 km/h speeds. We expected getting an Atlas team together to be more of a challenge, but everyone we approached was extremely enthusiastic and everyone did unbelievably well.”

During this summer’s testing round, Atlas achieved flights of 15 seconds and a height of about 0.5 m. “We need to develop more familiarity with the controls and how the helicopter handles, and we also need to do additional trimming and tuning of the structure,” Robertson says. “We also need to find a new test location that is less damaging to the helicopter during crash landings that’s also available on weekends, now that the student part of the team is back in school.”

Robertson says there were a few reasons why the Sikorsky Prize attracted the attention of AeroVelo. “The difficulty of the design problem itself was a pull, and the multidisciplinary approach is an excellent opportunity to work with and mentor other engineers,” he explains. “Working on the entire system is complex and a large task, yet simple enough that everyone can have an excellent grasp of the design of the whole. It’s lots of fun.”
www.aerovelo.com