Machine vision in a box 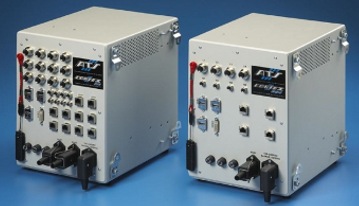 Integrating vision into a machine’s design may seem as simple as tacking on a couple of camera’s with some lengths of video cable. In reality, the cameras themselves are only a small part of a glitch free system. In addition to the optics, vision systems require lighting, I/O triggers, cabling, fast communications and a controller hardy enough to coordinate it all. And then, of course, there’s the image capture and analysis software that turns raw image data into usable information.

Problem is, very few providers offer the full package, leaving system integrators to source compatible components and figure out, often by costly trial and error, how to coordinate it all effectively.

If all that sounds like a frustrating and time consuming exercise, you’re not alone. Engineers at Cambridge, Ontario-based system integration powerhouse, ATS Automation, struggled with the same issues. After years of experience gleaned from hundreds of machine builds, they decided to chuck the pieces-and-parts approach and create their own.

Called Cortex, the system is an all-in-one vision device ATS designed in-house and recently began selling to end-users and system integrators. But developing world-class software and hardware is a new and entrepreneurial direction for a company known internationally for its automation services.

Phil Arsenault, director of imaging at ATS Automation Tooling Systems, says the first key step was developing software for its own people that was powerful enough for programmers but simple enough for controls engineers with little vision experience.

“Over many years, ATS developed some sophisticated vision libraries and, around 2003, came to market with SmartVision,” he says. “The decision to do that was to drive away from proprietary hardware and operate in a PC environment. Also, it removes the mysterious, ‘expert required’ piece by creating a software vision tool that is usable by almost anyone.”

The benefit, Arsenault says, is that the system is compatible with virtually any vision sensor capable of connecting to a computer, from high-end GigE cameras down to basic, off-the-shelf web cams.

“The folks who develop our SmartVision software, do it to make their jobs easier since they spend most of their time integrating machines on the shop floor,” he points out. “They aren’t software engineers sitting in an office; they are the guys who actually do the integration. Those same people created our Cortex hardware as well.”

A quick glance at the Cortex hardware makes it clear ATS designed its two systems (the Cortex 812 and Cortex 204) with their fellow system integrators in mind. Measuring 11x11x8.5 inches, the compact devices feature all inputs and outputs on the front face—including Ethernet and USB ports, DVI connector, hardware triggers, power cord, etc.—leaving the option of side- or back-mounting or used as a stand-alone unit.

In addition, both systems feature near identical specs. Internally, they’re powered by Beckhoff’s C6920 dual core processor and come with 2 GB of RAM and 3 USB ports for back up and keyboard hook-up. Internally, the systems run ATS’ SmartVision software for image capture and analysis and Beckhoff’s TwinCat software for internal communication. However, Arsenault says the systems can communicate externally with any Ethernet protocol and PLC maker’s hardware.

“In developing Cortex, we solved all the problems that had plagued us and slowed us down at integration,” Arsenault says. “When we created this product we didn’t realize we were making something special, but nobody is doing this so we decided to go to market.”

ATS launched its new vision system and services business unit in June 2011 and is currently seeking channel partners to sell the Cortex system and expand upon its direct sales efforts so far.

“When I look across the market, I don’t find instruments like this,” he says. “I’m grateful for that. It gives us the opportunity to grow a new part of ATS’ business and reach customers who we ordinarily wouldn’t have talked to.”
www.atsautomation.com