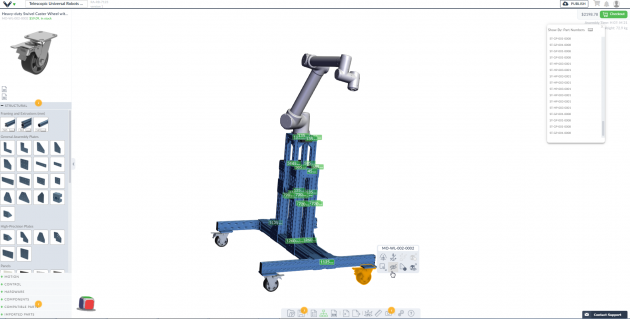 Canadian Vention, specializes in the parts that support machines that work on parts

We know a lot about the Big Four MCAD vendors (Dassault, Siemens PLM, Autodesk, and PTC), and you probably use programs made by them. So it may pique your interest that smaller vendors have popped up in the last several years to fill in gaps left by the big boys. And by ‘new’ I don’t mean headline-grabbing software like Onshape, Fusion and XDesign.

Being new means the software company can start fresh, without the burden of carrying a lot of baggage forward to maintain compatibility with functions and interface peculiarities of 30 years ago, even as programmers cobble new functions on top of the old.

Back in the old days, CAD programs developed slowly because the underlying technologies barely existed. I think back to the machinations Autodesk went through to get 3D solid modeling into AutoCAD. Their efforts began with the Pioneer Program, followed by Engineer Works, then the AutoCAD Modeling Extension add-on. Next, ACIS was built in, and finally the company’s got its own ShapeManager kernel.

By contrast, being a new CAD software company also means it can start at a sprint. Everything needed to build a new CAD system is readily available under surprisingly favorable licensing terms. You can get pre-built SDKs with APIs for 3D solid and surface modeling, 2D and 3D constraints, display and rendering, foreign file import/export, non-platform-specific user interfaces. There is even code to run the same program in Web browsers, on mobile platforms and with desktop computers. Heck, there are companies that’ll sell you the entire CAD system; all you need to do is rebrand the program with your logo.

Funding seems surprisingly easy to obtain these days, as well, with venture capital and angel investors desperate for the Next Big Facebook-like Return. That’s unlike Solidworks, for example, which launched on the back of winnings from card-counting at Las Vegas gambling tables.

One thing that hasn’t changed, though, is the question: Which platform? Thirty years ago, CAD vendors had to choose between dialects of Unix, CP/M, VMS, OS/2, Windows, MS- and PC/DOS – plus two kinds of Apple operating systems – running on 8-, 16- or 32-bit little- and big-endian systems.

It was actually a bit of a relief when most of CAD coalesced onto a single platform, Intel-Windows, with a little bite of Apple on the side. But thanks to the Internet and Apple, the possibilities re-expanded to Web, mobile or desktop; Android or iOS; and Linux, MacOS or Windows. Nascent developers have to decide whether to develop on one, some or all of them.

Let’s take a look at just four niche MCAD programs that came out in the last couple of years. All are new, yet polished. Crudely-written CAD need no longer exist.

nTopology
Due to its history, MCAD software is segmented by function: Pre-design, sketching and parts, assemblies, simulation, optimization and finally manufacturing through subtractive or additive operations. Some of these have merged in the last decade, but nTopology CEO Bradley Rothenberg feels all design ought to be generative. As a result, the company’s Element Pro software combines all design functions – from concept through to 3D printing – in a single software package.

nTopology feels all design ought to be generative, instead of segmented by function

In nTopology’s software, the generative design process optimizes object geometry by creating and testing dozens or hundreds of possible variations. The final result is often a latticework or an organic looking part that minimizes weight but maximizes strength.

Rothenberg believes 3D printing has the capability to create things so complex that we humans won’t be able to design them with traditional MCAD software. Instead, he sees routines performing the design for us. This concept is already happening with the Grasshopper programming environment hooked into 3D MCAD like Rhinoceros. Element Pro’s solution is its interactive Lattice Rule Builder, which generates a lattice work of gyroids (self-supporting 3D lattices) to fill empty volumes of parts with repeating patterns.

The structures don’t need to be lattices. Element Pro can also generate ribs that aren’t round and other optimizations (see Figure 1). The company plans to add a simulation tool that generates optimized structures, making them thicker where strength is needed, and thinner where it isn’t.

Frustum’s Generate running in a Web browser, showing the original part in grey and the optimized part in blue

Frustum also offers a generative design package, and a lot of what I said about nTopology applies to Frustum. But this firm’s angle is that their software (named Generate) runs on its own solid modeling kernel, named TrueSOLID. Whereas nTopology currently generates only 3D lattice structures, Frustum adds what’s missing: Integrated simulation, which they call Hexahedra-8.

You can’t, after all, properly optimize parts until you apply stresses and determine where and how the part will experience strain. And so, rather than ending up with a lattice structure that mimics the original part, Frustum ends up with organic-looking shapes with voids where material is unnecessary for strength (see Figure 2).

Frustum runs on the cloud and inside NX, probably because the company received funding from Siemens Venture Capital. The TrueSOLID kernel is available for licensing.

Shapr3D
The development of CAD for mobile devices has gone through three generations. The first generation was view-only while the second added drawing and editing functions. Now, the third generation consists of mobile apps that do feature-recognition and automatic constraints.

Feature recognition turns your finger-drawn loops and squiggles into round circles and arcs, straight lines, and smooth splines. It makes sense on smartphones and tablets (when the primary interface is your finger), more so than on desktop computers. Automatic constraints assist the drawing process by setting those lines horizontally and vertically, and connecting endpoints.

The first firm to do constraints and recognition on any mobile device was Arctuition with its ArcSite app, followed closely by Siemens PLM with its CatchBook app. But both do only 2D designs. To date, there is just one app that does 3D modeling, Shapr3D.

Shapr3D employing the pencil to create 3D models on an iPad

The catch to Shapr3D is that it works with exactly one hardware combination: iPads that support Apple’s Pencil stylus. (On iPads without a stylus, the app is only a 3D viewer.) Developer Istvan Csanady says he picked the iPad Pro initially because it is four times more powerful than regular iPads, and because Android “hardware is crappy.” He has no immediate plan to support Windows laptops that work with a touch screen and stylus.

The reason Csanady requires users to employ the stylus is for its precision; the area under your finger is too large, and in any case it covers up exactly what you are interested in editing and drawing. Fingers in Shapr3D are used only to zoom, pan and orbit in 3D space.

The user interface of Shapr3D is designed so that the left hand selects commands from buttons that line the left edge of the screen, while the right hand controls the stylus. (See Figure 3.) The Apple stylus lacks buttons but does sense pressure, so you can specify data like control points by pressing harder every so often.

Some functions are determined by the direction in which you move the stylus. For example, dragging an edge away from you creates a fillet, while dragging it towards you creates a chamfer. As with desktop MCAD systems, you can enter precise radii and distances with the onscreen keyboard.

Csanady is proud that the entire system runs on the iPad with no assistance from the cloud. The kernel underlaying Shapr3D is the open source Open Cascade kernel, but he is thinking of substituting ParaSolid when the iOS version becomes available.

Vention.io
Vention is a Canadian industrial parts distributor that specializes in the parts that support machines that work on parts, such as the stands that hold robotic arms and welders.

Last year the company added a Web-based program called Machine Builder for designing stands for industrial equipment. (See Figure 4.) It is a 3D modeling system that CEO Etienne Lacroix calls a powerful CAD configurator. It’s not a CAD system, he insists: “We don’t intent to compete in the CAD space.”

Still, there are a number of similarities. In Machine Builder, you design stands by selecting parts from Vention’s library, such as extrusions, plates and caster wheels. Extrusions can be dragged longer and shorter. All these parts snap into place, as they know their connection points through a constraint solver that Vention programmed on its own.

While you can import your own parts (from 20 file formats), you have to connect them manually to the rest of the design. In addition, Vention provides a library of finished designs made by its own staff and other users, which can be copied, modified and then exported in STEP format.

As you build the stand virtually, the BOM function reports the cost in real-time, as well as the estimated assembly time. Once the design is complete, you pay for the order and for shipping. Once the box of parts arrives, you get to assemble it.

Small, speedy software firms are doing exciting work, largely under the radar. There are many more – in MCAD, architecture and other disciplines – than the few described here. These firms have the advantage of working with modern APIs and choosing the best platform for their needs.

But, in many cases, they are also burdened by investor money that will need to be repaid, one day, plus a healthy return. Whether they can attract sufficient numbers of paying customers isn’t certain. Certainly, one way out is for another, larger MCAD vendor to eventually buy the company, its intellectual property and/or the staff. For now, all have free versions that let designers see if they fit into the design workflow. DE