Down to the Metal

Additive manufacturing technology has traditionally been associated with polymer or resin-based parts, but metal 3D printing is quickly gaining steam. In fact, according to a report published industry research company IDTechEx in May, metal sintering and related 3D printing technologies are now considered the fastest growing segment of the industry, with printer sales growing at 48% and material sales growing at 32%. The trend is expected to continue for the next five years.

That popularity, the report says, is due, in part, to its early uptake by the aerospace and medical device industries. For example, GE Aviation is investing $3.5 billion in its new “Multi-Modal” facility in Chakan, India with the goal of 3D printing 100,000 fuel nozzles there by 2020 for its next generation LEAP engine. To punctuate its enthusiasm for the technology, the industrial giant announced in September its intention to buy two of the top 3D metal printer companies, Arcam of Sweden and Germany’s SLM Solutions, for $1.4 billion.

Similarly, Airbus and Boeing are both progressively integrating 3D metal printing into their aircraft manufacturing process. Airbus, for example, produced what it calls a ‘bionic’ partition using direct metal laser sintering technology for the A320 Airbus from a strong, lightweight alloy called scalmalloy. Reportedly, the company has expressed plans to 3D print (resin and metal-based) up to half of all components for its future airplanes.

While an important milestone for both industries, P&W’s pioneering use of AM metal parts may be unrepresentative of the aerospace industry in Canada, a recent study suggests. According to a survey conducted by business university HEC Montreal, in partnership with the National Research Council of Canada (NRC), 3D metal printing has yet to establish a strong foothold among contract manufacturers and aerospace OEMs on the whole.

“There is a lack of interest among manufacturers to invest in AM due to the initial investment, which is too high and too risky, given the speed of evolution of AM technologies and the low demand from OEMs,” states the report (AM in the Aerospace Industry, The State of the Industry, May 2016).

The report is based on a survey of 107 Canadian industry participants working in more than 70 organizations from every segment of the supply chain, including OEM and tier 1 manufacturers, contract manufacturers, metal powder providers and academic institutions.

Beyond the technology’s high cost and rapid obsolescence, respondents also pointed to a lack of international standards/certifications of AM material and processes; slow process throughput and adapting existing designs to 3D printing processes as chief among the challenges of adopting AM.

However, the primary challenge expressed, especially by respondents with metal 3D printing experience, was the issue of post-processing requirements. Predominantly, respondents said that material choice (e.g. aluminum vs titanium) plus not designing to AM’s strengths can push post-processing expense to 50% of the overall cost of a part. In addition, Canada suffers from an incomplete additive manufacturing supply chain, the report explains.

“For example, most of the products manufactured through metal AM will require hot isostatic pressing (HIP) to increase their density (reduce the amount of air in the metal), but there are no commercial providers of HIP in Canada,” The report’s lead author, Gabriel Doré, writes. “In fact, there is only one commercially available provider of large HIP in northeast North America, and it is located in Boston. Any printed metal requiring this treatment will cross the Canada-U.S. border twice and pay customs fees twice.”

To help foster metal additive manufacturing in Canada, the report makes a number of recommendations, starting with an effort to improve general understanding of AM and design expertise in the technology. If manufacturers and OEMs aren’t aware of metal 3D printing’s capabilities and limitations, it argues, then they’ll be likely to miss opportunities and fall behind globally. Taking advantage of metal AM will also require training engineers how to design parts that leverage AM’s strengths.

Finally, the report recommends industrial partnerships between OEMs and contract manufacturers to help spread the risk and costs associated with metal AM processes. Partners would also share in the IP of a new part, and OEMs would commit to a set quantity order of the new AM product.

The full report, including all data and graphs in pdf format, is available from the Canada Makes website. 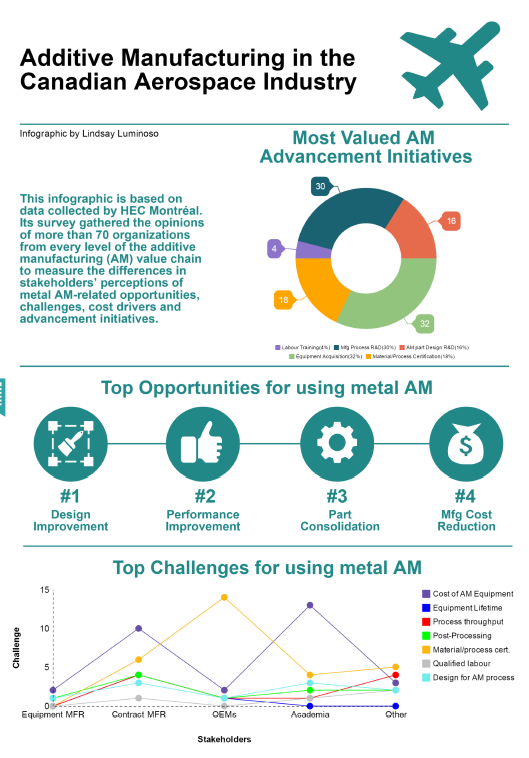