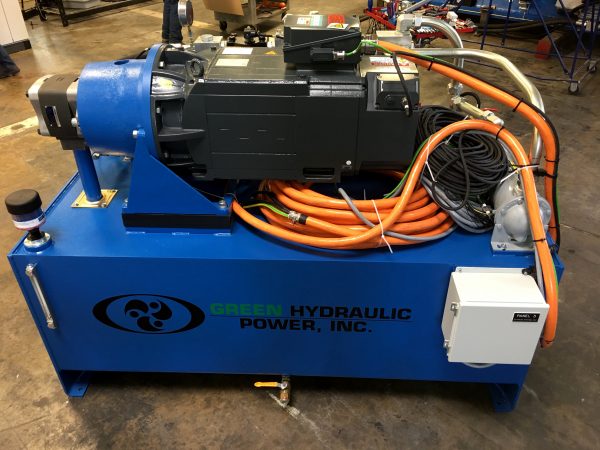 About three years ago, MJC President Carl Lorentzen began investigating the configuration of the hydraulic units used on his company’s machinery. Lorentzen had a great interest in servo-pump technology, having read about its application in other industrial uses such as injection molding machines, extruders, cranes, lifts and other materials handling equipment.

“We had looked at a variety of ways to improve the energy efficiency of our machines,” Lorentzen says. “Being a California company, there are substantial incentives offered here for documented energy savings in machine building and operations. Plus, I felt it was simply the right course of action to do our part in protecting natural resources.”

He also cited a recent incident, where MJC changed insurance carriers and, as part of the company safety audit, sound levels were tested and the hydraulic power units were a concern. Lastly, as MJC sells its machines to premier OEMs around the world, issues involving big data capture, IIoT and Industry 4.0 integration were surfacing from customers.

All these factors caused a “light bulb moment” for the builder. MJC began serious investigation into the application of servo-pump technology to replace the constant motor operation on the main hydraulic unit of the machines, in a concerted effort to reduce energy consumption, noise and, owing to the smaller hydraulic reservoirs needed, the machine footprint. These definable upsides for MJC machine design and the company’s marketing of its equipment caused considerable excitement for Lorentzen.

“We are fortunate to have on our staff an amazing group of electrical, hydraulic, controls and mechanical engineering talents,” he says. “All these engineers had the same reaction I did, and we began to rethink our hydraulic power units from the ground up.”

Lorentzen also turned to Siemens, a longtime supplier, for further assistance. A team led by Chris Britton, the Siemens sales manager for the region, assisted with various application engineering studies, energy and controls testing to affect the optimum design, all while working in concert with the MJC team.

A further advantage quickly emerged, as the Green Hydraulic Power unit (GHP) began to take shape. Little or no external cooling was required to dissipate the ambient heat of the unit.

Further, in response to the market’s movement toward digitalization, there were two aspects of note. From the OEM perspective, MJC benefitted from the conceptualization, engineering and commissioning tools offered by Siemens in the build-up of the GHP units. Sizer, for example, orchestrated the integrated data across the entire platform of drives technology, enabling the MJC engineering team to match the most suitable products to the specific requirements of the end user applications. This enabled a drastic reduction in the engineering time on subsequent unit designs. MCAD likewise enabled the importing of all motor specifications to match the requirements of each job.

Finally, for the end-user, the Siemens TIA Portal provides faster commissioning, increases productivity and facilitates comprehensive data capture. This benefits both operations/maintenance personnel and the integration of the data into a “digital factory” mode, as the system’s condition monitoring and diagnostics can reside in the cloud or otherwise be networked to a controls communication stream. Depending on the drives technology selected, it’s also possible for the end user to perform online configuration of the drives via their web server.

GKN Aerospace in Orangeburg, South Carolina was the first customer for whom an entirely new MJC spinforming machine was built, utilizing a complete, and now duly named, Green Hydraulic Power unit. MJC’s Vice-President, Per Carlson, and his hydraulic engineer, Jerry Wang, designed the unit. An already documented result of the GHP unit onboard its machine, GKN has experienced nearly a 70% energy consumption savings, plus the quieter operation and smaller footprint.

Following this development, Lorentzen had another, more profound revelatory moment. He realized the unit could easily be adapted to any type of heavy hydraulic piece of equipment. Subsequently, he established Green Hydraulic Power, Inc., which today functions as a free-standing enterprise.

“The GHP is a complete turnkey system with I/O options to run with any PLC, to control the power utilization on virtually any type of hydraulically-powered machine,” explains MJC electrical engineer and robotics manager, Jose Machuca. “We researched the variable speed drive hydraulics for over two years to devise the optimum solution on our current standard models, which comprise 15, 30, 55 and 80kW units.”

The Green Hydraulic Power unit integrates a number of Siemens Automation components, including a touchscreen control panel, drives control and this wireless panel.

“Nobody is offering a closed-loop, engineered system like the GHP for integration onto a customer’s machine, with practically no impact on that machine’s design,” he adds. “It quickly became clear to us we had a real gem here, as GHP can be used as an OE component or retrofitted onto an existing piece of machinery in the field. That includes practically every machine we’ve built ourselves.”

More than a dozen MJC machines with GHP units have been built and installed to date with no issues reported. Lorentzen cites the extended warranty on the Siemens components, which constitute the majority of those used on the GHP, as a further upside.

“We had a very dynamic interaction with the Siemens engineering team to make this unit come alive,” Machuca adds. “We frankly didn’t know what to expect at the outset, but the results have been very pleasing, so far. And we’ve only just begun.”

Further options under development for GHP include Siemens Scalance wireless control, kW torque setpoint on pressure, fail-safe compatibility, custom touchscreen and other monitoring and maintenance tools for operation and unit data transmission in an Industry 4.0 environment, over a Profinet industrial Ethernet protocol.

When equipped with the high-level Safety Integrated PLC from Siemens and other required components, the GHP is suitable for severe environments such as oil rigs, chemical processing equipment and other challenging work environment applications.

Currently, machines with this green hydraulic unit are in operation at industry giants like Meritor, SpaceX, Worthington and multiple plants of GKN Aerospace. Most have been in use for six months to a year without performance issues.

“We can say with high certainty our customers are experiencing up to 90% energy savings, plus the quieter operation and reduced carbon footprint as additional positives,” Lorentzen states. “I’m certainly glad I read what others were doing with servo-pump technology, as it’s made a big and very positive impact on our company.”

This article was contributed by Siemens Automation.