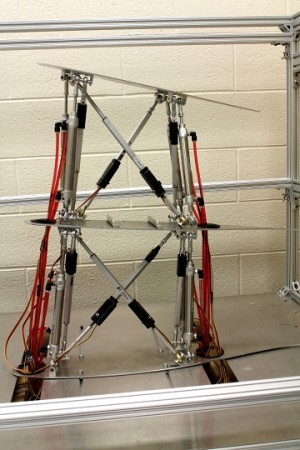 Designed by Dr. Jeff Xi and his Ryerson University research colleagues, this variable geometry wing prototype features pneumatic actuators in place of spars to allow the wing to dynamically morph, in flight, to maximize efficiency during each flight phase.

Since the introduction of ailerons and other control surfaces, the rigid and static construction of aircraft wings has served as a given in aerospace design. But for nearly a century, engineers have known that a one-shape-fits-all approach to wing design isn’t the most efficient way to keep the fuselage and its contents in the air.

For example, a wing geometry that best promotes lift for take-off and landing at slower speeds loses its efficiency as the plane transitions to level flight. In the same vein, a wing designed for cruising speeds requires huge amounts of power to generate sufficient lift during take-off and ascent.

Over the years, many attempts have been made to create a wing that dynamically morphs to suit the various phases of flight. Fighter jets like the F-111, F-14, MiG 23 and others, for example, feature a variable-sweep wing (i.e. “swing wing”) that jut out at nearly a 90-degree angle during take-off but sweep back toward the tail during flight to reduce drag. Other concepts have included changing the wings’ angle of attack (e.g. the F-8 Crusader) or twisting the wing down its long axis, similar to the Wright Brother’s Flyer or the experimental X-53 Active Aeroelastic Wing.

As yet, variable geometry approaches like these haven’t been applied to commercial aircraft. But according to engineering professor, Dr. Fengfeng “Jeff” Xi, at Ryerson University’s department of Aerospace Engineering, doing so could one day reduce the amount of fuel large passenger jets consume during routine flights.

“When you fly a plane, you have take-off, climb, cruise, decent and landing,” Dr. Xi explains. “These are all different aerodynamically speaking, and if you translated those phases into optimal wing shapes, the geometries would all look radically different. Right now, airplanes use high lift devices such as flaps to produce more lift in a climb, for example, but that’s not optimal because you are using a lot of energy to produce it. What you want is to have the overall wing geometry change.”

Working in partnership with Bombardier and with backing from the Natural Sciences and Engineering Research Council of Canada (NSERC), Dr. Xi and his research colleagues are developing a method for morphing wing geometry that goes well beyond previous methods.

Most strikingly, Xi’s design would do away with traditional control surfaces like flaps and ailerons. In addition, his approach isn’t limited to morphing only one wing parameter (e.g. span, sweep, angle of attack, etc.). Instead, his concept would allow the wing to potentially morph all parameters, in flight, to attain an optimized target shape.

For example, during take-off or ascent, a variable geometry wing would extend to its full span, increase angle of attack or progressively curl the wing upward, from root to tip, to maximize lift. After reaching level cruising flight, the wings might then transform by reducing the span and sweeping backwards to reduce drag.

“Of course, if you want to change the shape, you can’t build a continuous wing,” Xi says. “So what you do is design the wing in segments or what we call, a variable geometry truss. In a traditional design, the wing box is composed of spars with ribs at a fixed distance from each other. In our design, there are linear actuators between the ribs.”

Proportionally engaging these individual actuators — each wing segment has one actuator for leading edge, one for trailing edge, and two for respective diagonals — allows the overall structure to morph to the optimal shape.

“We’ve also developed a technology so that when these structures move, they remain rigid to withstand all the loads,” he says. “So we have added four passive bars that are lockable, two in place of the leading edge spar and two in place of the trailing edge spar. During the transformation, some of the passive bars would be released and others locked to maintain rigidity.”

So far, Xi says his team — including Dr. Paul Walsh and two Ph.D. students Daniel Finistauri and Amin Moosavian — has pinpointed the various optimal wing shapes with 3D printed models tested in a wind tunnel and built a two-module variable geometry truss system to make sure it can withstand the loads that would be encountered during the in-flight transformations. The next step is developing a flexible yet durable material to skin the morphing wing structure and eventually putting the design to a limited real-world test.

“The idea is to have the system be completely computer controlled,” he says. “But practically speaking, we won’t apply the technology to the whole wing initially. What we are doing with Bombardier now is trying it on a winglet. They want to try it out locally first.”

As yet, Xi says there are no hard numbers to quantify how much effect a variable geometry wing would have on efficiency, and therefore, fuel economy. However, he estimates it could reduce drag by approximately 3 percent. That may seem small, but improving the efficiency of the hundreds of flights taking place each day could add up to a significant reduction in CO2 emissions.

“The push is to help ‘green’ aviation. If you can achieve the optimal aerodynamic performance, then you can maximize lift and reduce drag and fuel consumption,” Xi says. “The fact is, airplane design hasn’t seen a drastic change since almost its inception, so a morphing wing could represent a paradigm shift in future aircraft.”
www.ryerson.ca/aerospace