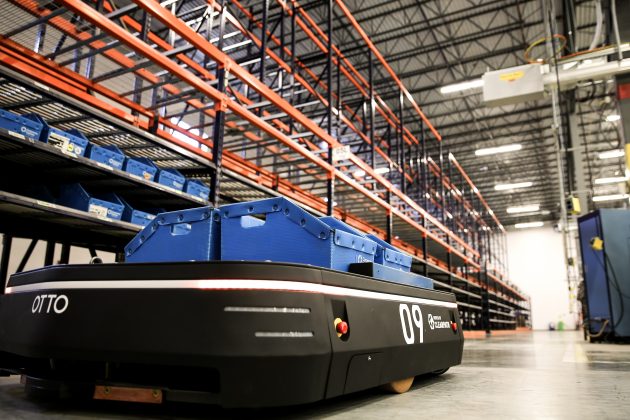 In an industrial environment, as material moves throughout a warehouse, it’s generally transformed. After parts come in on skids, they can be unloaded, broken down to smaller sizes, placed into kits, built back up, wrapped, and then shipped back out. Often, these tasks are dull, dirty or dangerous, causing bottlenecks in the material transport process and hindering a company from maintaining an effective workflow.

Enter Clearpath. Best known for its research division of outdoor unmanned vehicles like the Grizzly RUV and Heron USV, the Kitchener, ON-based company has now turned its robotics expertise toward the shop floor with the launch of its newest division, OTTO Motors. The division produces self-driving vehicles (SDVs) for material transportation. Cleverly named OTTO, the company’s latest SDV is designed to minimize the hazards and productivity issues associated with traditional systems.

“Consumerism is changing the way materials are manufactured and delivered,” said Simon Drexler, director, industrial systems at Clearpath. “Thought leaders in material handling began to approach Clearpath to understand how our technology could be a solution. As we learned more about the industrial landscape, we realized that we needed to start with the pallet.”

In the U.S. alone, there are over 2 billion pallets in operation; In fact, almost half of U.S. hardware lumber production goes to pallet making. It’s estimated that more than 80% of U.S. commerce is carried on pallets. So it makes sense that Clearpath would design the vehicle with similar specifications and applications.

“Material transport takes shape in many different forms within a manufacturing operation, from heavy-load pallets to light-load pre-packaged kits,” says Drexler. “We recognized the different applications within the material handling process, so we wanted to offer our customers two sizes of self-driving vehicles in order to accommodate their use cases: one is made for large material transport and one is to move smaller parts in bins and kits.”

Following two years of development, the line of industrial self-driving vehicles launched in September 2015 with the OTTO 1500, a vehicle offering an impressive 1500kg payload capacity. At approximately 47 inches wide and 72 inches long, this OTTO amply accommodates a standard 40 by 48 inch pallet. Yet at 15.7 inches high with only 0.7 inch clearance, the SDV’s wide base and low center of gravity allow for customizations including larger overlaid support structures or additional handling equipment like mechanical lifters.

To support what amounts to the weight of an average mid-sized car, the low-riding SDV features a rugged one-piece all-metal frame bolstered by a passive suspension. In total, the OTTO 1500 sports eight wheels: four caster type (one at each corner); a support wheel at the mid-body on each side and two drive wheels near the center. Powered by two coordinated servomotors, the drive wheels allow the robot to spin with a zero turn radius or differentially turn in any direction.

For customers who don’t require the muscle of the OTTO 1500, Clearpath recently introduced the OTTO 100, a smaller model with a 100kg payload capacity. 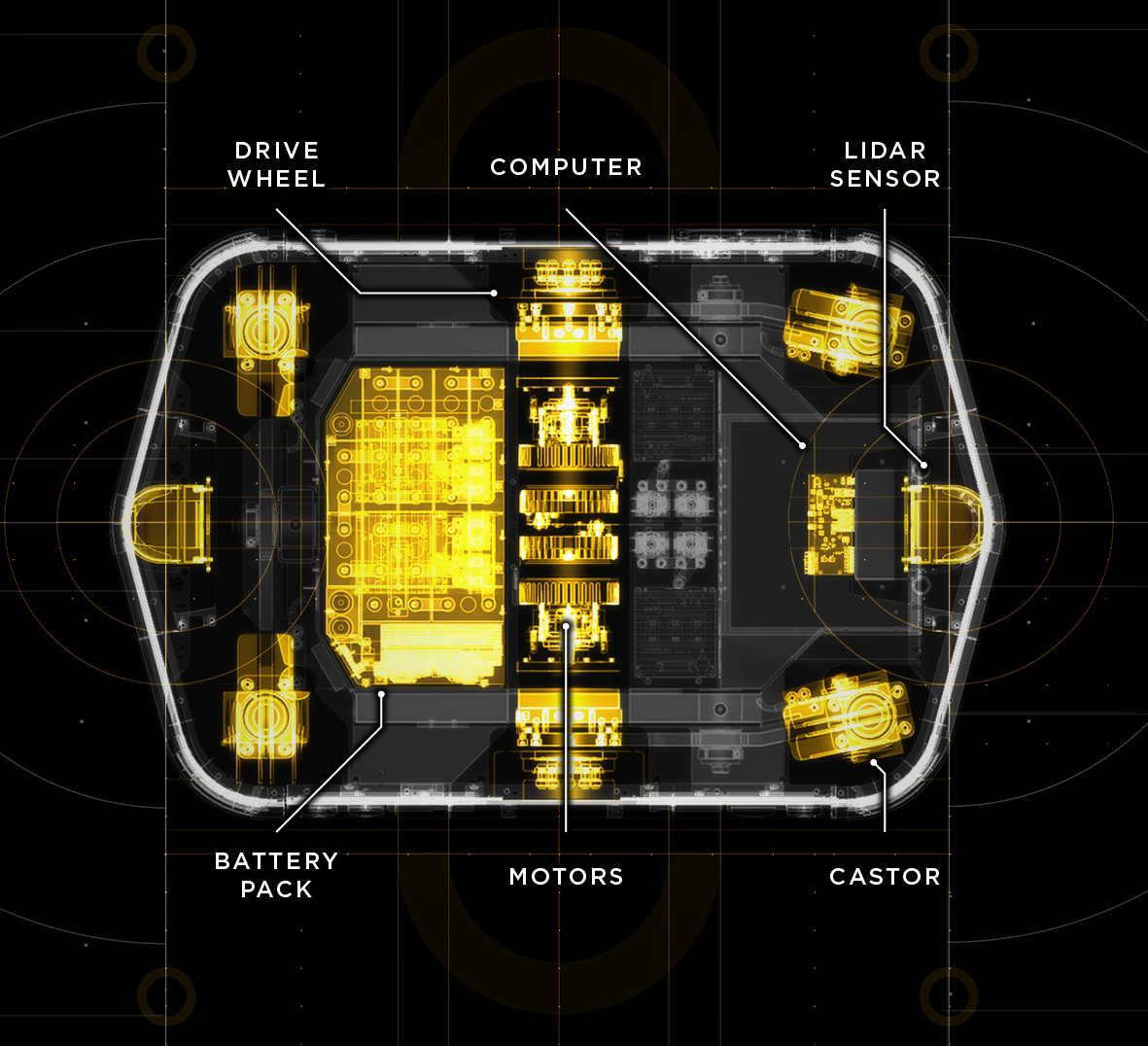 An inside look at the OTTO 1500. The vehicle features eight wheels in total, with four caster type wheels on each corner, a support wheel at the mid-body on each side and two drive wheels near the centre. The OTTO 1500 is powered by two coordinated servomotors and uses two LIDAR laser scanners to build a global reference map and move throughout the industrial space.

According to Drexler, development of the OTTO line required an almost perfect intersection of hardware, electrical and software engineering — a truly interconnected system.

“Our design process unfolds in that way: we bring cross-functional technical experts together to solve complex problem,” Drexler says. “Autonomous operation in an undefined space is a very challenging thing to do robustly and safely, but our team of professionals has risen to the challenge.”

It’s that “undefined space” that separates an SDV like the OTTO from traditional Autonomous Guided Vehicles (AGV), Drexler explains. Rather than relying on magnetic tape for navigation, Clearpath says the OTTO line investigates a new space the same way a person would. Utilizing two LIDAR laser scanners built into the vehicle, the system progressively builds a global reference map during its first tour of a facility. Along with way, points of interest are highlighted on the map including walls and stationary shelves. The Clearpath software, which acts as a “tour guide”, can then be used to mark areas on the map such as major intersections, manufacturing cell drop off points or mandatory stop points.

Once this is completed and a global reference map has been created, the vehicle is able to freely navigate within the map for any jobs that it has been tasked with. Built on SLAM (Simultaneous Localization and Mapping), OTTO’s navigation system also allows the SDV to choose its own optimal path from point A to B and recalculate a new path should the original route become blocked. Many vehicles can be introduced to the fleet, all working off and dynamically updating the same centralized map through WiFi.

“They are interconnected through one centralized controller, that is optimally assigning mission and jobs to the fleet based on key performance indicators,” explains Drexler. “If you are trying to maximize throughput, it will assign missions in a way that will maximize throughput.”

The flexibility of this system is a real benefit over traditional material handling solutions. Traditional automation requires customers to build the processes around existing systems with restrictions including quarantined areas where personnel cannot enter. Whereas self-driving vehicles operate in a way similar to how humans would move parts around a facility, which allows the customer to scale the operation at any rate necessary.

The system is also adaptable to fit the needs of the industrial space. For example, if the facility is running two shifts, one with a left-handed worker in the morning and a right-handed worker in the afternoon, traditional automation is unable to adapt to this challenge. Traditional systems will drop the product at the exact same spot every time because it follows a fixed path and a fixed waypoint. The OTTO line, however, can accommodate the line change as it uniquely navigates as an infrastructure-free system. The vehicle can stop whenever and wherever it wants; it can drop the material off on the left-hand side in the morning and the right-hand side in the afternoon with the click of a button.

One of the driving forces behind the development of the OTTO line is the Industry 4.0 movement.

“If you control the data and material flow in the factory, you have a very significant understanding of how your factory works,” Drexler says. “Industry 4.0 is about interconnected systems in a factory and using data and intelligence for material transport, and if you have the data-driven insight, then you have a better understanding of your daily operations and how to improve them.”

The vehicle intelligence offers the ability to optimize material handling. The OTTO self-driving vehicles are always calculating the optimal options for workflow. Clearpath explains the intelligence resides on the actual vehicle to do all the navigation. They are intelligent enough that if a person walks in front of the vehicle, they are able to go around the person. If an aisle is blocked within the facility, they will find a different path by referencing the global map. The vehicle can also identify when its battery is low and drive to a docking station and recharge, enabling 24/7 operation. 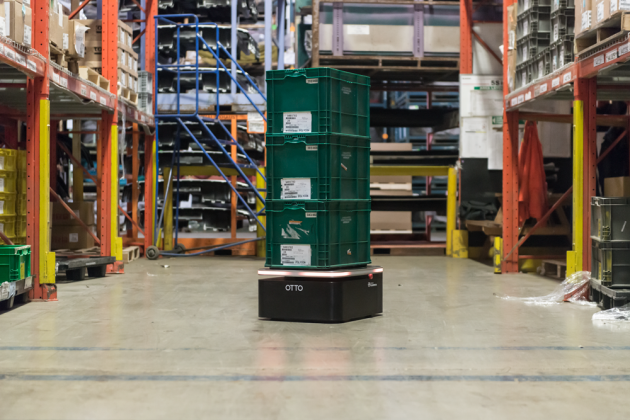 The OTTO 100 comes in different configurations to allow users to move a wide variety of material sizes and shapes.

The OTTO line allows users to draw zones to impart rules on the vehicles; this point and click style operational method gives users maximum efficiency and control. They can click to see a dashboard status update of key performance indicators and vehicle performance charts.

The automotive industry has been early adopters of this system, explains Drexler. A car plant can change its lines every three or five years depending on the model upgrades. The OTTO line allows for the changes to be made with a simple click. With traditional systems, auto manufacturers would need to move navigation infrastructure, reprogram the system, consider renovating their facility layout, and change the entire process, which is costly and time consuming. The automotive industry has decades of experience working with autonomous guided vehicles (AGVs), and the OTTO line is essentially an evolution of this technology, so it’s a natural fit.

Currently, Clearpath’s OTTO line has two major partnerships that they are able to disclose: General Electric and John Deere. Drexler also notes that they have implementations with OEM automotive manufacturers as well and tier 1 and tier 2 suppliers, some of which are Canadian companies.

At present, the company is focused on introducing the OTTO line to the industrial market in North America to automate material transport in manufacturing centers. The OTTO 1500 and OTTO 100 offer unique appliance interfaces allowing customers to put virtually anything they want on top of the vehicle.

“We can easily expand to distribution centers, warehousing, and many other spheres,” says Drexler. “It is absolutely the tip of the iceberg; this technology is broadly applicable.”