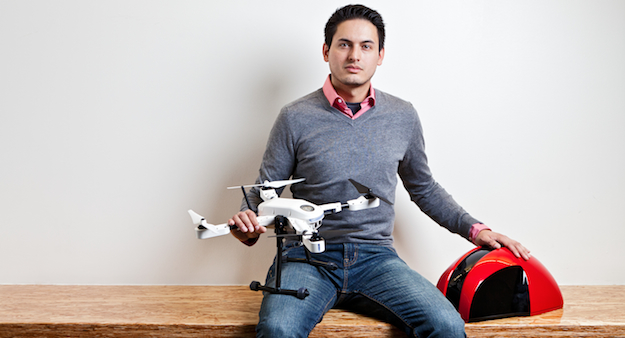 Klever Freire, CEO of Toronto-based DreamQii and creator of the PlexiDrone, a small UAV designed for film-makers and photographers. (© Michael Barker/Acme Art & Design)

As the U.S. Federal Aviation Authority (FAA) nears the establishment of guidelines for commercial Unmanned Arial Vehicles (UAV) south of the border and Transport Canada streamlining applications at home, the market for small, light drones, with enough power to carry a payload, is heating up. A quick Google search or browse through crowd-funding sites like Kickstarter or Indiegogo shows the growing number of recent entries into the commercial UAV market.

Few, however, have sparked the buzz surrounding Toronto start-up DreamQii and its quad-rotor UAV, the PlexiDrone. During its 30-day Indiegogo crowd funding campaign, the company attracted more than 2500 backers and approximately US$750,000, well past the original $100,000 funding goal. The drone has similarly coaxed distributors like photography equipment retailer Henry’s, which will offer the PlexiDrone on its shelves when commercial shipments of the drone start in early 2015.

According to the PlexiDrone’s creator and DreamQii CEO, Klever Freire, his UAV’s popularity comes down to a combination of marketing savvy and tailoring the UAV to a high growth segment of the market.

“A few years ago, before we entered the market, photography stores started to pick up on what their customers were asking for,” he says. “But those first generation film and photography drones were being sold by accident because they were designed initially as recreational toys for RC hobbyists. It just so happened that they had enough power to take up a small action camera.

“Today,” he adds, “it’s really about having the compete package, one that a photographer can just pick up and start using without having to be an expert in programming, flying remote control aircraft or modifying things with a 3D printer.”

While similar looking to other quad-rotor UAVs, the 2.2-pound PlexiDrone possesses a number of elements designed specifically with photographers in mind. For example, it features a tool-less, snap-together construction that allows the rotor arms, landing gear and camera mount to detach from the central hub. Once disassembled, the components pack neatly into a hard-shell backpack for transport.

“There are a lot of benefits to making the arms detachable,” Freire says. “For example, the modularity makes the Plexidrone extremely portable. And, if you are using the UAV for your business and you damage a propeller, you may not have time to fix the entire frame, but you could easily swap out an arm.”

The system’s modular architecture also extends to its payload capabilities, allowing for any number of custom photographic configurations. In addition to mounts for GoPro and other compact dSLR cameras, the company offers a special harness to accommodate a spherical 360-degree panoramic camera called the BublCam made by fellow Indiegogo favorite and Toronto-startup, Bubl Technology.

No matter what the camera payload, the small UAV also accommodates 2- and 3-axis image-stabilizing gimbals which, Freire says, the PlexiDrone is uniquely designed to take advantage of since its landing gear retracts to provide an unobstructed shot.

“What is really important to film makers and photographers are things like an unobstructed field of view, great camera positioning and being able to take up more than one camera type, along with hands-free portability and an attention to industrial design,” Freire says. “It’s important that it look like a completely ready-to-fly drone you can use immediately even if you didn’t knew anything about [remote control aircraft] previously.”

Beyond its modularity, the Canadian-made drone also possesses a number of handy features for prospective aerial cinematographers, especially those without any prior RC pilot experience. Controlled via either an iOS, Android or Windows-based mobile device, DreamQii’s drone allows for standard waypoint-style programming but also incorporates a GPS-enabled “follow-me” option. Pressing a button in the drone’s companion PlexiGCS app tells the drone to follow behind, above, in front or to the left or right of the controlling smartphone’s location.

For safety, the system’s ultrasonic sensor can detect and avoid obstacles at distances of up to 30 feet and its voice notification system alerts users to potential problems. For shots that require more than one camera angle, DreamQii’s system also allows two or more PlexiDrones to be coordinated simultaneously via the PlexiHub. The Bluetooth-enabled wireless drone “router” allows one user to swarm multiple UAVs and film an event from multiple angles, follow search grid patterns or survey larger areas.

Weighing 1 kg without payload, the UAV can produce 7 lbs of thrust and reach a top speed of 70 kph (43 mph). According to the company, the drone’s rechargeable battery lasts between 10 to 35 minutes of hover and 10 to 25 minutes of flight time, depending on payload weight.

Perhaps one of the PlexiDrone’s most attractive features, however, isn’t a component, spec or design element, but how it will navigate Transport Canada and FAA certification. After all, the best commercial-grade UAV on the market is useless if it’s illegal to fly. However, Freire says that a recent Transport Canada ruling, which allows UAVs under 2 kg to be used for commercial applications without requiring an Special Flight Operations Certificate (SFOC), levels the horizon for light UAVs like the PlexiDrone.

“Previously, the best a drone OEM could do was make sure that their product would be able to pass an SFOC certificate application,” he says. “For quite some time, this was looking to be an advantage for established but expensive UAVs on the market. Now, with the ruling, you can get a cheap drone, attach a camera to it and get the live video feed you were looking for without having to spend thousands of dollars.”

As the crowd-funding campaign drew to a close in November, Freire said the money raised will go toward fulfilling the approximately 800 pre-orders for the sub-$1,000 PlexiDrone. The next step will finding the right mass-production partners, he says, to keep up with demand once the product has it retail debut next year.

“We are looking to keep things as Canadian as possible,” he says. “Within the next six months to a year, we definitely expect to start releasing the next version of the PlexiDrone. By then, we will have a much better idea of what the demand is like in terms of volume.”
http://plexidrone.com