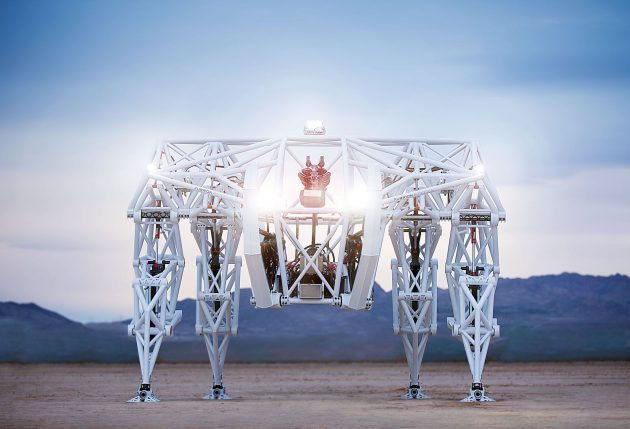 At CES 2017 in Las Vegas, anyone who visited the exhibition space of luxury technology development company, Furrion, was greeted by the industry’s biggest and burliest “booth babe” – a 5-meter-tall, 5-meter-wide four-legged walking “mecha” called Prosthesis – The Anti-Robot. Weighing in at 3500 kilograms, it’s the creation of British Columbia-based engineer/artist Jonathan Tippett, and the latest mechanized beast to come out of Vancouver’s eatART Foundation, an educational research facility that focuses on large-scale, technically sophisticated art projects.

Like eatART’s other well-known mechanical sculptures – the six-legged Mondo Spider walking machine and the 50-foot long robotic snake Titanoboa – Prosthesis seems like the idea of a young engineer who has watched one too many anime cartoons. In reality, hundreds of volunteers, including eatART co-founders Charlie Brinson, Leigh Christie and others, along with countless University of British Columbia students, helped fabricate the colossal mesh of chromoly steel.

And besides, Prosthesis isn’t a robot at all, in that it doesn’t rely on computer controls or programming to function. As its name implies, the machine is more like a mechanical suit that “merely” amplifies the pilot’s motion. As a result, Tippett says the exoskeleton has more in common with a motorcycle or snowboard – a machine that allows a trained rider to express, and ultimately revel in, their own physical prowess.

“I didn’t want to just make a giant windup toy that you sat on; I wanted it make it something that required skill,” Tippett explains. “For me, the most rewarding experiences of my life have been in situations where I’m calling on years of training with a machine that I’ve become intimately familiar with, like a motorcycle. Combine that with a slightly perilous situation and you get into this state of intense focus or being in the ‘zone.’ So Prosthesis took that shape – as something that required your whole body to control.”

Although the idea of building a giant walking machine came all at once while Tippett admired the colossal sculptures at Burning Man 2004, he says it took him a while to settle on a design for his machine. Initially playing with both two-legged and four-legged designs, he says he ultimately settled on a combination of both. 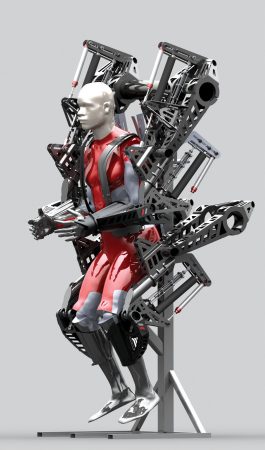 Harnessed into Prosthesis’ cockpit, the pilot controls the exoskeleton’s legs by moving his arms and legs in unison in an alternating pattern.

“Having four legs is a nice stable platform and easily controlled by a four-limbed pilot,” he explains. “But an abstract interpretation is to think of it as a two-legged walker; that is, its inside legs are one leg and its outside legs are another leg. And because each step has two feet, you can bias the pressure on those feet to create a virtual contact point that’s somewhere between them. I think, in that way, it’s intuitive to operate because we’re used to bi-pedal balancing schemes.”

Each limb of the pilot is mapped to a particular machine leg – arms control the outer legs and the pilot’s legs control the machine’s inner pair. By moving arms and legs in concert, the machine’s movement resembles the gait of a gorilla or a person walking on crutches.

“You turn by making your outside legs move faster than your inside legs,” he continues. “It’s skid steer but the architecture of the machine is specifically designed to optimize that. With the legs in a row, as opposed to a zoomorphic architecture where you’d have front legs and back legs, it makes it much easier to steer using a skid steer principle.”

With the overall concept set, Tippett says he began work on the Alpha Leg, a 2:3 scale test bench of the final leg that now serves as a trainer for prospective pilots. After giving up on a telescoping leg idea, he ultimately settled on a hinged structure that resembles a lightning bolt.

The bottom section of the leg’s zigzag structure connects a landing pad to a box-like four-bar linkage in the leg’s mid-section. Within that mid-section, three shock absorbers in parallel (two custom-made air and one coil-over) passively straighten the leg and cushion the impact force as the footpad lands. The upper section of the lightning bolt connects the leg to the exoskeleton’s “hip,” an axel about which the leg swings.

To drive its limbs, each leg is equipped with two hydraulic actuators. The “hip” actuator connects to the upper tip of the leg and causes it to swing forward and back. The second actuator connects to the backside of the four-bar linkage. Retracting this “knee” actuator shortens the leg and lifts it off the ground as the hip actuator swings the leg forward. As it clears the ground, the forward moving leg extends to meet the ground. The hip actuator then pulls the leg backwards as the shock absorbers support the machine’s weight and cushion the ride.

Although the overall design might sound fairly straightforward, Tippett says getting the Alpha Leg to work properly presented the project’s biggest challenge.

“When we first went to ride [the Alpha Leg], we found that the thing wanted to jump backwards all the time,” he says. “I thought, ‘Do I need to change the ratio of the 4-bar linkage, do I have to make it non-linear, does it have too much spring?’ Eventually, the answer hit me. Literally, the week before we started building Prosthesis, I said, ‘Guys, we’re turning the legs around backwards. If that’s what it wants to do, why fight nature?’”

Overall, Prosthesis sports eight hydraulic cylinders (four on each side) supplied by two hydraulic pumps and powered by a 96V electric battery below the cockpit.  In place of large tank-like reservoirs, the exoskeleton incorporates two variable volume reservoirs, made by Montreal’s Smart Reservoir Inc., that cut down weight and prevent air bubbles from fouling the system. Overall, the system outputs 170kW (225hp) to produce a top speed of 30km/h for up to two hours, Tippett says.

“The idea was to have the machine as directly connected to the pilot as possible with the least amount of technological intervention between pilot and machine,” he says. “So I had to step it up one level in technology by using solenoid valves and sensors to pick up the pilot’s input forces. That way, we could choose how much input force was needed and we could adapt the response curve.” 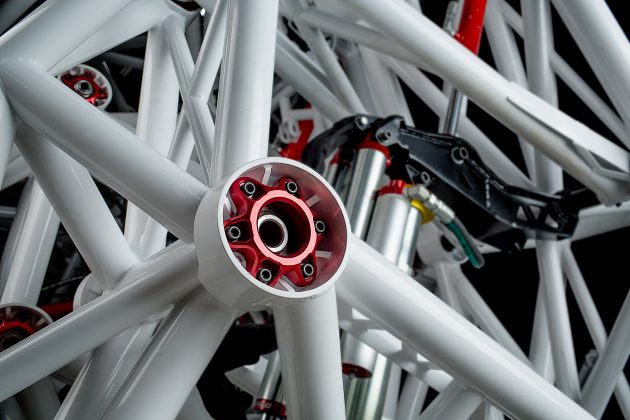 This close-up of one of Prosthesis’ four legs shows a four-bar linkage hub with the leg’s custom air shocks and hydraulic “hip” actuator in the background. (Photo credit: Michael Hall)

Adapting the exoskeleton to its pilot is crucial, Tippett explains, since the exoskeleton is intended as a sports machine and therefore needs to convey as much feedback as possible to the pilot. At the coarsest level, providing that feedback required Prosthesis’ legs and the pilot’s limbs always be in the same position and can’t be out of sync with each other.

Secured by a five-point harness, the pilot inserts their forearms into metal bracers and legs in greaves that encircle the pilot’s calves. The rider’s limbs are then secured in place by pneumatic bladders similar to a blood pressure cuff. Moving both arms and both legs in alternating circular patterns, constrained by the exoskeleton’s eight degrees of freedom, translates to a 1-to-1 motion in Prosthesis’ legs.

“Prosthesis is just power; it’s not autonomous,” Tippett says. “There’s no on-the-fly adaptation according to what the machine is doing. However, we can fine-tune the machine to find a sweet spot that is just enough resistance that the pilot is engaged but yet the exoskeleton doesn’t twitch and move at the slightest input. But it also doesn’t require so much force to move that it is exhausting.”

For Tippett the artist, Prosthesis embodies a mechanized reminder not to lose the human element under layers of automation; machines as an extension of ourselves rather than an abstraction insulating us from the performance. For Tippett the engineer, however, Prosthesis culminates 12 years of engineering design, testing and fabrication. In the short term, he says Prosthesis and the rest of eatART’s mechanical menagerie will continue to make appearances at events and help fund the foundation’s future projects. In the long term, he foresees Prosthesis, with help from corporate sponsor Furrion, becoming the first machine in a new form of off-road racing.

“We were actually mapping out our plans to develop the technology and launch a league based on motor sports-type model,” he says. “Our plan is very much to get this machine dialled in so it’s a sporty high performance machine and then build another one and then race them. It’s all mapped out. I’ve got a very busy 24 months ahead of me.”